In this sisterMAG series, we present a selection of more and less well-known artists. Their work features a particular piece of clothing that is also central to the issue. This time: the skirt.

Fancy some more clothes in art? The series started with trousers in art, continued with fashion photography and the dress, followed by blouses in art.

One name, many shapes

In this sisterMAG series, we present a selection of more and less well-known artists. Their work features a particular piece of clothing that is also central to the issue. This time: the skirt.

Whether it’s short or long, tight or puffed up with volume, comes in a simple colour, sparkling with sequins or in wild prints: there are hardly any boundaries to the skirt as a piece of expressive clothing. For this issue, we took a look at skirts throughout the history of fashion and the different shapes that skirts can take. Because after lots of research, we now know that a skirt isn’t simply always a skirt!

Let’s start with an eye-catcher from what today is Iran which depicts an approximation of the clothes worn at court during the rule of the Qajar-dynasty in Persia. The piece of clothing worn by the woman painted would probably rather count as a pair of trousers in today’s terms but the wide cut does make it appear as a skirt at first glance. The fabric has a large-scale, repeated pattern woven into it. Her hands are lifted in graceful movement, holding a rose in her right hand and a sorbet in her left hand. Next to the very detailed depiction of the clothes’ patterns, the fine brushstrokes that make up the transparent scarf and glass are especially remarkable.

The »Fourteen-Year-Old Dancer« by Edgar Degas (1834-1917) was shown in 1881 at the sixth impressionist exhibition, where it scandalised the art scene with its break from the visual conventions of 19th century sculpting. Furthermore, it was unusual for Degas to have made this piece, as he was known as a painter much more than a sculptor. It was only after his death that over 150 sculpted pieces of art were discovered at his atelier. He used different materials to make them, from wax to clay and textiles. The versatile colours coming from this technique were a never-before-seen innovation in sculpting. The little dancer is made from wax and was dressed in a real skirt and dancing shoes by Degas, with a linen corset, satin hairband and horse’s hair.

A little less innocent are these paintings by Adolf Erbslöh (1881-1947). »Girl in a Red Skirt« (1910, left) and »The Red Skirt« (1910, right) are two expressionist paintings showing a woman half-undressed with her upper body naked, wearing a long red skirt. Present in the title of both paintings, the skirt takes up a little more space in the left painting – but both of them entice with their vibrant colours. The black framing of the painting’s elements heightens their contrast to the backdrop. As both paintings were made in 1910 and show similar scenes, the woman depicted might even be the same person. Upon closer inspection, the paintings could be showing the moment in time just before or after each other: on the left, just before getting undressed, e.g. to put on more comfortable clothes or just before being fully dressed to leave the house, on the right almost completely undressed, ready to go to bed or, on the contrary, about to get dressed.

The oeuvre of Austrian painter Egon Schiele (1890-1918) offers a huge variety of pieces of clothing in art. From today’s point of view, »Back view of a Girl in a Blue Skirt« (1913) seems to be showing a knee-length wide dress with a back closure rather than a skirt. Considering the history and development of the skirt, however, it becomes clear that the skirt took a variety of different shapes over the course of centuries and depending on geographic location. If you search for »Knabe mit langem Rock« (translated to »Boy in a Long Skirt«, from 1910) by Schiele on the internet, you’ll find another example of something that does not look like today’s »classic skirt«.

US-American photographer Cindy Sherman (*1954) always poses questions of identity, sexuality and the body in her work. For a series for POP magazine, exhibited in 2019 at the National Portrait Gallery in London, the artist worked with well-known couturier Chanel. The results have a strange aesthetic: Bored faces, awkward poses and haute couture against the backdrop of impressive landscapes. Sherman uses these photos to question our perception of the perfect glamour shown in the high-fashion magazines of this world. She took the self-portraits in front of a green screen and layered them with landscape photographs she had taken on the island of Capri and during the 2010 eruption of the volcano Eyjafjallajökull in Iceland. In »Untitled #540«, she is stiffly standing in her wig and a leather jacket and taffeta skirt designed by Karl Lagerfeld.

»I was conscious about the choices I was making with the pieces, to select things that didn’t read „fashion“…I was looking for things that had some other kind of quality.« – Cindy Sherman

Do you know more paintings with extravagant or interesting skirts? Let us know! Share them on social media or to carolin@sister-mag.com. We’re looking forward to it!

Fancy some more clothes in art? The series started with trousers in art, continued with fashion photography and the dress, followed by blouses in art. 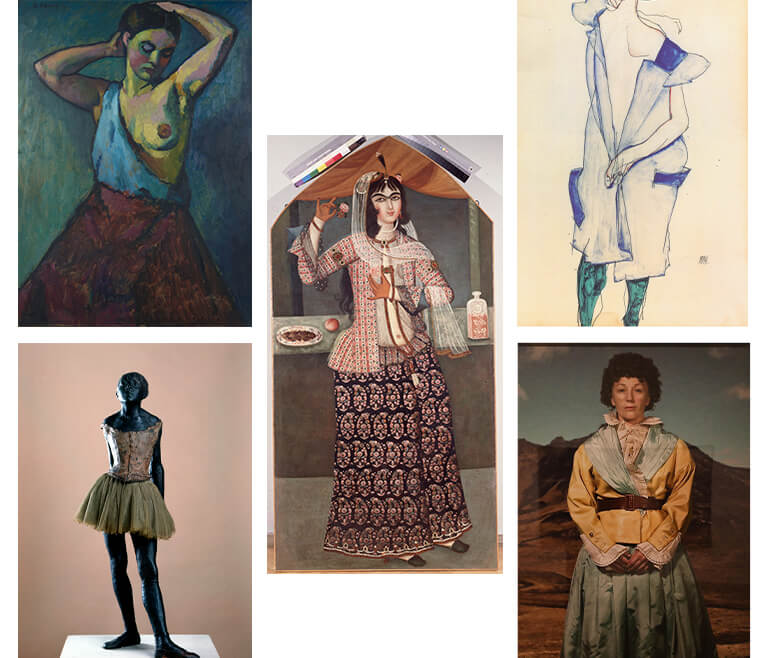 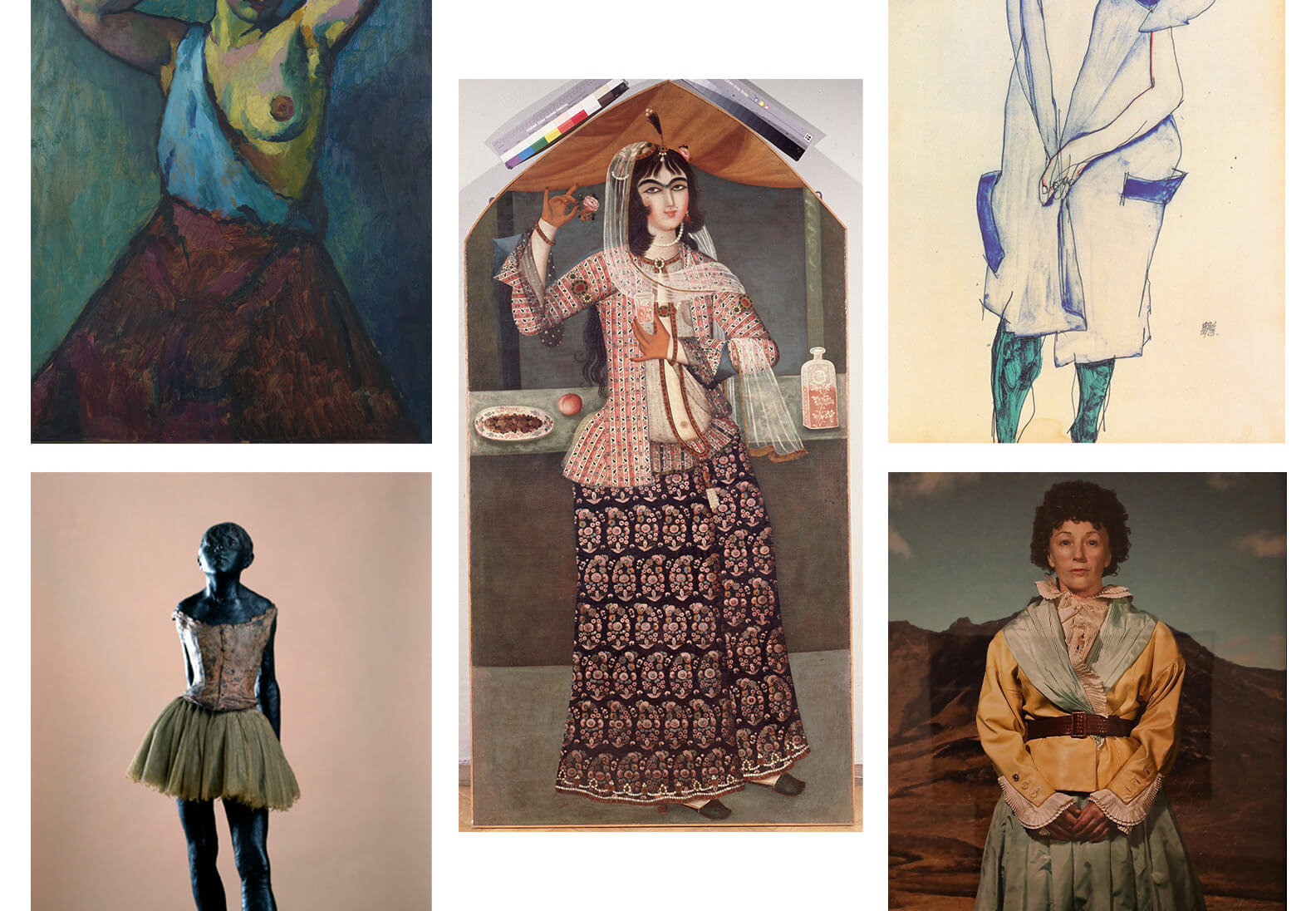 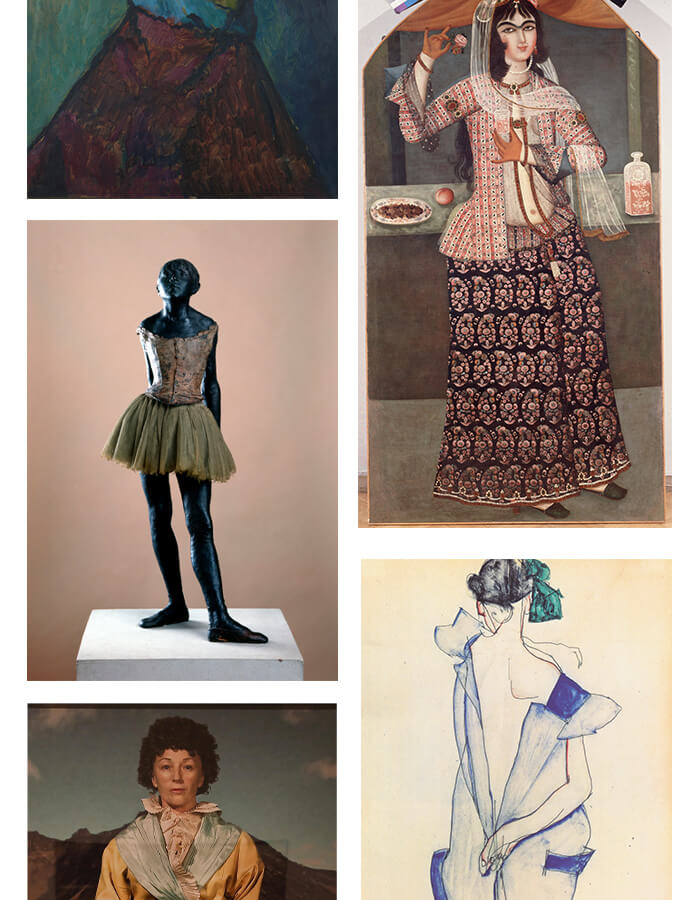 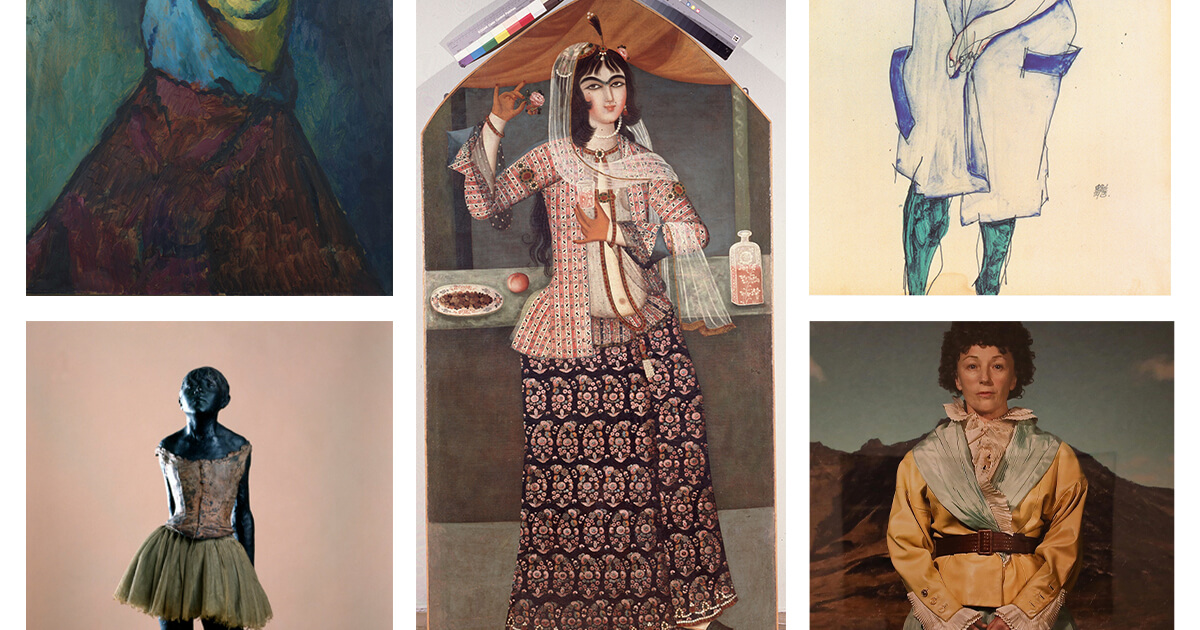