The male hat & why proverbs often have something quaint about them

DO CLOTHES MAKE THE LANGUAGE? According to a German proverb, you can recognise the bird by the feathers. If proverbs were language’s feathers … what would their use reveal about us? Without metaphors, we could hardly communicate at all. Proverbs and idioms are also nearly indispensable, yet sometimes underestimated. In this column, author Elisabeth Stursberg discusses why that is and why it should not be, bringing to mind many of our favourite fashion-related examples. In this sisterMAG issue: The hat.

Other parts of the column: The pants | The dress | The blouse | The underwear

A Touch Of Past Glory

Although it usually stems from a different time, on the occasion of the launch of this column we want to make a case for: the proverb. Even more than idioms or metaphors, proverbs tend to seem a bit old-fashioned, especially those that themselves refer to fashion, to individual pieces of clothing or accessories. The hat is the best example. Considering how fast the fashion carousel is spinning, one cannot help but wonder how many hat-related expressions have survived until today, even though occasional upswings (hipster trends, royal weddings) have not succeeded in bringing hats back into the mainstream.

In German, if you want to say: “Forget it, not a chance!”, there is a lovely way to put it: »Das kannst du dir an den Hut stecken!« (literally: “You can put that on your hat!”). That is because people used to put pretty, but rather useless items on their hats, like feathers.

Briefly summarised, there are two relevant linguistic aspects to the hat: The fashionable object, and before that, the etymology of the word “hat” which derives from something like “head cover” (old English: “hæt”). They therefore belong to the original concept of covering and protecting, however, while both have produced a plethora of directly related expressions in the German language, there is less metaphorical use of the hat in English. Still, we have a few catchy examples (and will be translating a few more German ones too).

As headgear, the hat is closest to the spiritual centre of the person and thus became pars pro toto: an individual part (the hat) stands for the whole (the person wearing it). It is also the non-royal equivalent of the crown – whoever “wears the hat” has the power. Countless variations of form and colour emerged, providing more detailed information about the social status of the wearer. The ritualised handling and strategic use of this symbol are consequentially a rich source: Whoever (figuratively) throws his hat into the ring not only applies for something but does so by summoning up all social prestige associated with his person (the literal hat throwing seems to have been a custom in 19th century prize fighting). Similarly, putting on, for instance, one’s lawyer hat means taking on a whole different role thanks to the symbolic value and authority of the hat.

But only the person who “wears the hat” can also “take it off”? On the contrary, that is the beauty of figurative meaning. Whoever takes off the hat is showing respect – to another person (a higher ranked person, winners, women), to the surroundings (church) or in a specific situation (greeting, funeral). The succinct “Hut ab!” in German is still quite popular but is typically used referring to an achievement. Whoever takes off their headgear also makes themselves defenceless. In terms of attire politics, getting rid of the symbolically loaded object means falling back only on oneself.

Then we have those expressions from a time when no respectable man would have stepped out onto the street without wearing a hat. They illustrate just how naturally the hat was a part of everyday life. Completing a task at the drop of a hat – you must have been rather quick! Who threatens to “eat their hat” must have been very surprised that what they believed to be a sure thing was actually not so sure. As these expressions show, not everything with a hat is “an old hat” (something outdated, another German expression that itself is nowadays slightly outdated).

Compared to German, the English language is also fond of proverbs: they would be considered good style rather than antiquated as can be the case in German. It is well-deserved (the good style verdict), given how these expressions make our language more lively, pictorial and simply charming while simultaneously making the past come alive. 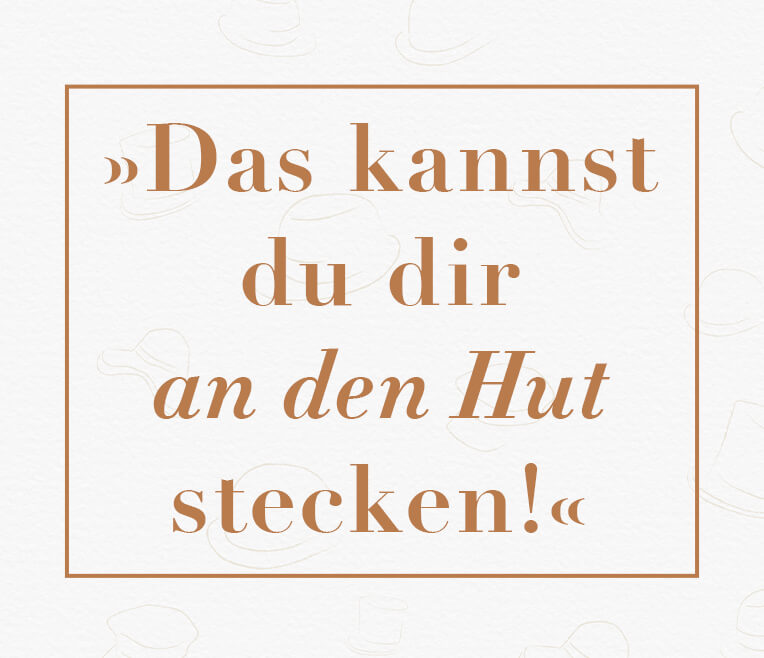 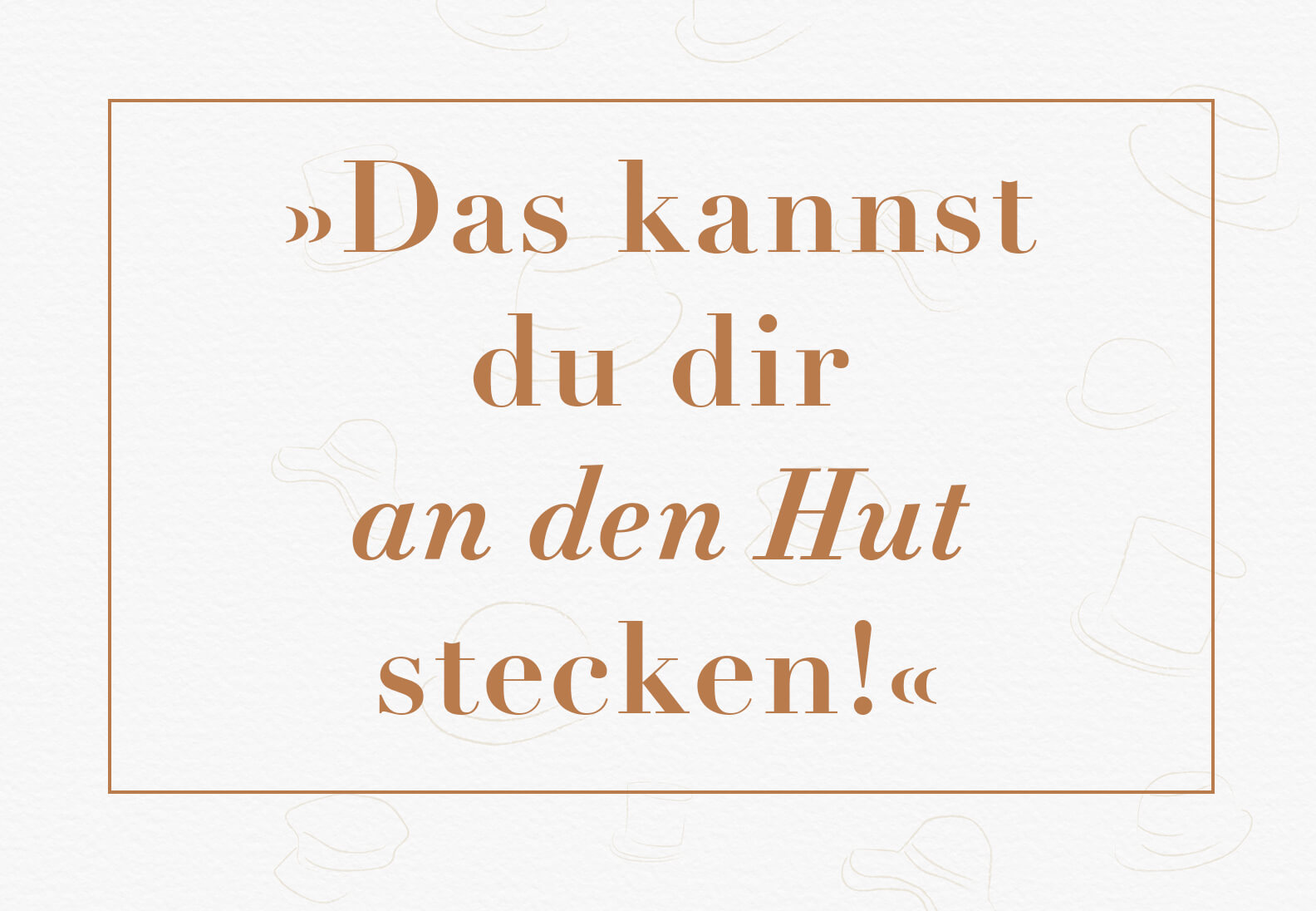 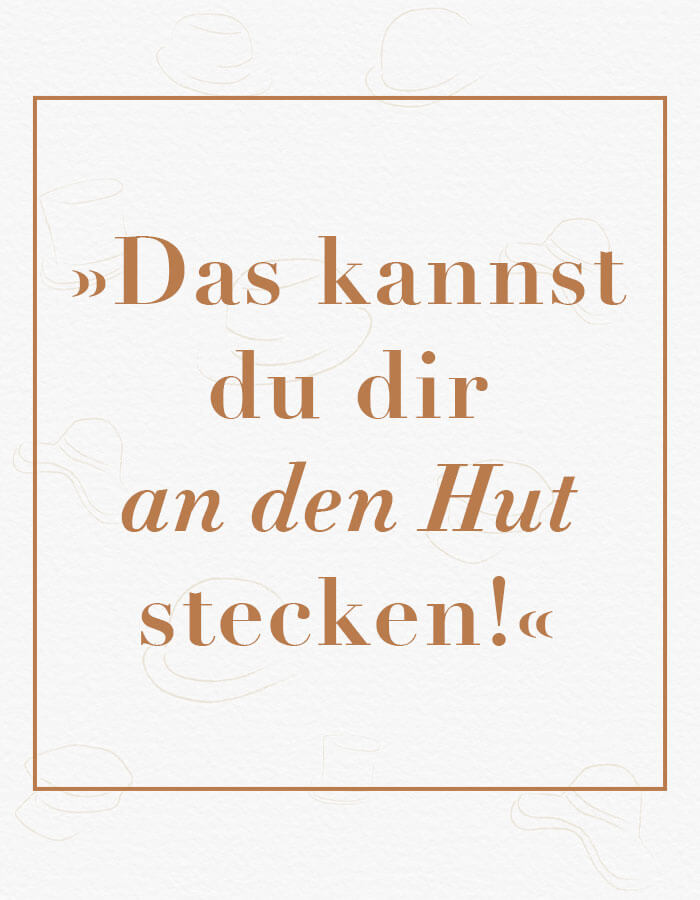 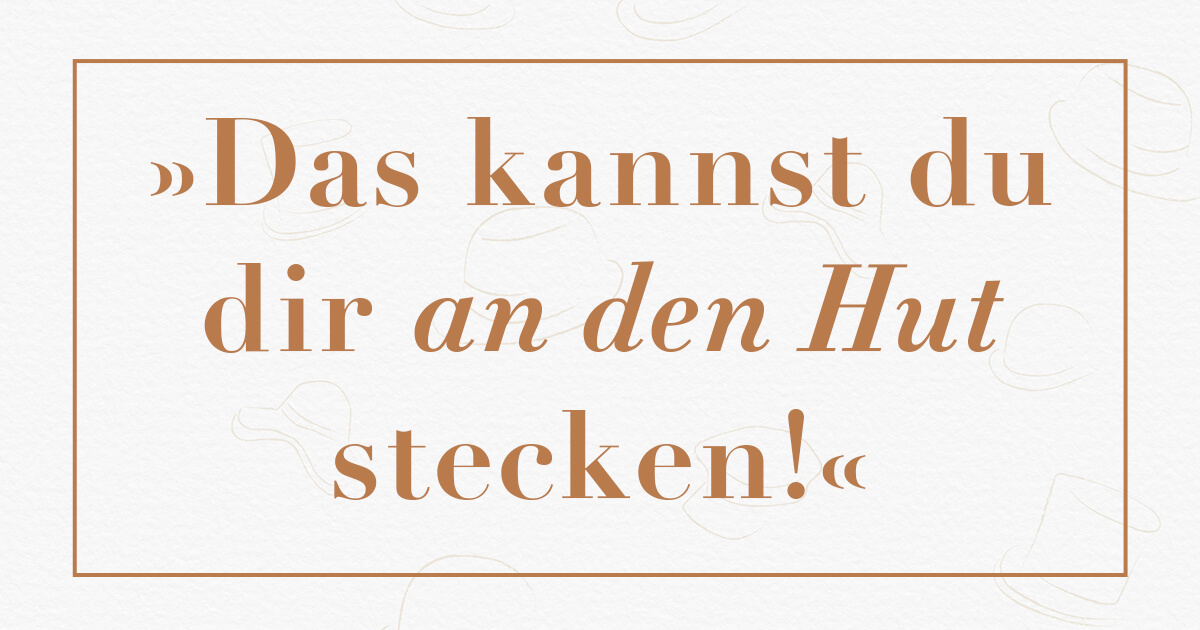