sisterMAG issue 49 is placed right at the turn of the 19th and 20th century. We look back at the decorative and ornamental time of Art Nouveau and its important representative: the Viennese artist Gustav Klimt. His world famous painting »The Kiss« is the title painting of our new issue. Read this interview with curator Franz Smola from the Belvedere Museum in Vienna (which is home to the original painting) to find out more about the meaning of Art Nouveau, the art scene in Vienna and the artist himself.

A chat with curator Franz Smola

Even if your personal connection to art history is non-existent – »The Kiss« by Gustav Klimt (1862 – 1918) is something we have all seen. With countless reproductions in the form of prints or modern interpretations and Klimt-re-enactments like the one by Conchita Wurst in 2014 at the Viennese Life-Ball, the aesthetic of Art Nouveau from the turn of 19th and 20th century remains right at the forefront of our minds – especially its close ties to the city of Vienna.

By chatting to curator and Viennese Modern and Klimt-expert Franz Smola, this sisterMAG issue manages to dive deeper into the mosaic-like golden pictures of Austrian artist Gustav Klimt and his works…

1. What is remarkable for Gustav Klimt and his artistic works?

Klimt belongs to a generation of painters standing right on the cusp of modernity. His training still obeyed to rules of late historism, but as a painter of the Art Nouveau era he also dealt with symbolism and the innovations of his time. Klimt didn’t shy away from taboos by creating provocative depictions of naked women. He also incorporated the then-modern tendencies of pointillism into his numerous landscapes. Klimt’s remarkable role in art history is the enormous weight given to ornaments in his works. His portraits combine nearly abstract ornaments with phenomenal portraiture. An incredible example for this is the famous painting of Adele Bloch-Bauer, the »Golden Adele«.

2. Since when does »The Kiss « belong to the Belvedere and how did you acquire it?

The Belvedere came to own the painting almost immediately after it was finished in 1908 – back then, we were called the »Modern Gallery« and the painting was bought by the K. u. K. Kunstministerium (Royal Ministry of Art). The buy was one of the earliest and most important public transactions of its kind. The painting was first accessible to the public during the exhibition »Kunstschau Wien« in Vienna in the summer of 1908 and was immediately purchased for 25.000 crowns – around 150/200 Euro in today’s terms. And even if Klimt’s paintings are sold for 10 times the amount of that today, it was a lot of money considering that the annual salary of a regular teacher was around 1.200 crowns. A regal villa was on the market for around 40.000 crowns back in the day (including furniture). To have lady’s portrait painted was around 8.000 to 10.000 crowns so Klimt was definitely one of the best earning artists of his time.

3. How would you describe the period of Art Nouveau?

»Art Nouveau«, or »Jugendstil«, is a style that dominated the arts and architecture in the early 1900s in Europe and the USA. The representatives of Art Nouveau were very critical of traditional academies and the art of historism as they aimed for an entirely new kind of cultural life and environment. Most remarkable are the round shapes and floral elements that were present in the applied arts, painting and sculpting. The centres of Art Nouveau were Paris, Nancy, Brussels, Barcelona, Budapest, Helsinki, Munich, Darmstadt, Vienna and Glasgow; although the last two focused on geometrically-orthogonal shapes instead of the famous florals of Viennese Art Nouveau.

4. What meaning would you give the work of Klimt in Vienna at the beginning of the 20th century?

There is no doubt that Klimt was one of the most popular painters of the town even while he was still alive. His work did polarise and was occasionally the target of strong criticism and even scandal in the public eye of Vienna at the beginning of the 20th century but in general, his pieces were appreciated and admired. And Klimt always had an important role in the art scene even though he was quite withdrawn and shy. He was the founding president of the so-called Secession in 1897, an artist’s group including the most forward and successful people from all over the country. In 1905, he stepped back from his position after creative differences with several competitors and founded his own group. First dubbed the Klimt-group, they re-named themselves »Bund österreichischer Künstler – Kunstschau (Group of Austrian artists – Art Exhibition« after their frequently held exhibitions from 1908. His work was a much-admired beacon of Art Nouveau the continued to thrive in the years around WWI, when the general movement became more defensive as expressionism took hold.

5. What else can the visitors see at the Belvedere other than Klimt?

The collection of the Austrian Gallery Belvedere contains around 15.000 works, mostly paintings and sculptures. A selection of 420 pieces from the Middle Ages until the 20th century can be found in the upper Belvedere. Next to the world’s biggest collection of paintings by Gustav Klimt, our highlights are paintings by Egon Schiele and Oskar Kokoschka. We also have spaces for the female artists of the Viennese Modern like Helene Funke or Elena Luksch-Makowsky. Their works are surrounded by works of classical modernity of international standing by exceptional painters like Claude Monet, Edvard Munch or Vincent van Gogh. Highlights of the collection from the 19th century are the monumental paintings of Napoleon, painted by Jacques-Louis David and the biggest collection of Biedermeier-paintings in Austria. Visitors also love the 18th century »Striking Heads« by sculptor Franz Xaver Messerschmidt. 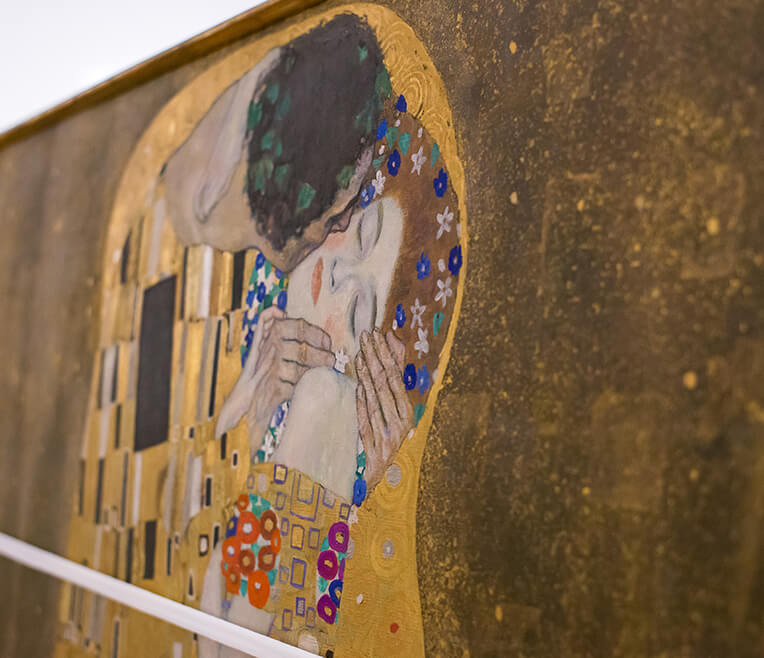 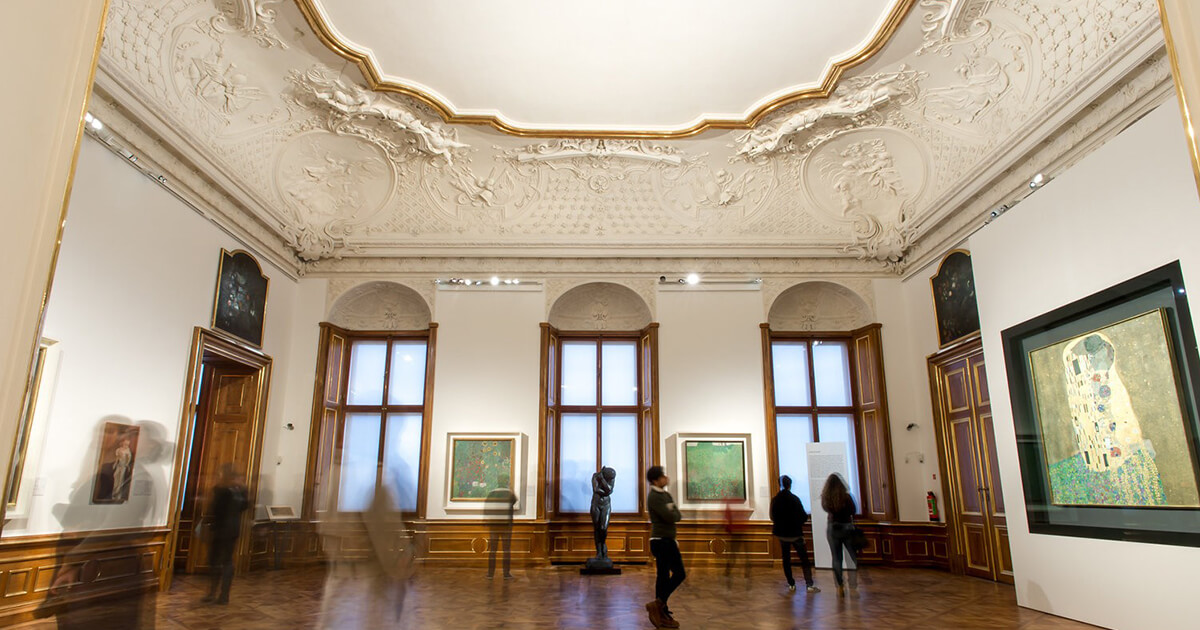