Koons and the »Balloons«

Jeff Koons is one of the big earners within the international contemporary art scene and has created his own trademark with his unmistakable balloon sculptures. Author Carolin Kralapp introduces the artist, his career and some of his works in sisterMAG No. 63.

Koons and the »Balloons«

On Jeff Koons and his unique art objects

Jeff Koons (*1955) has a solid place in contemporary art. The American is one of the best-earning artists on the international art scene and seems to playfully win over his audience again and again, awakening public interest with sometimes controversial pieces. In this sisterMAG, we take a closer look at his recipe for success, which works mark his oeuvre, and what the deal is with his balloon sculptures…

Koons showed an early interest in art and working creatively. He took weekly painting classes and finished academic art training at the Maryland Institute College of Art and the School of the Art Institute of Chicago. His father, the owner of a furniture shop and interior designer, shaped the boy’s curiosity for a career as an artist. As a child, Koons already exhibited pieces in the shop’s windows. By 11, he’d sold his first painting. The path to being an artist was clear.

Koons‘ art imitates and interprets contemporary consumer objects. He works with objects of everyday art and commercials, earning him several accusations of copyright infringement. But this deterred his success: in 2019, his sculpture »Rabbit« was sold for an unbelievable $91 million USD by the famous auctioneer Christie’s. It is the most expensive piece of art sold by a living artist. Koons works with all different mediums and formats available in art. Together with his team, he creates paintings, photography, installations and sculptures from various materials such as glass, marble, wood and steel. The pieces usually have an ironic aspect to them and represent what some might dismissively consider »kitsch«. The artist consciously plays with pictures and elements that are known to the majority of people and thus have a high chance of being recognised. Maybe that’s an important part of his recipe for success: a visual language that many understand and can identify with. Koons has not only transformed exhibition spaces around the world, but also international public spaces. This made his art available for a broader audience and added to the visual spread of his objects. His 12-metre dog sculpture »Puppy« sits right outside the Guggenheim Museum in Bilbao; his »Bouquet of Tulips«, in remembrance of the victims of the Paris attacks in 2015, is a controversial gift from the artist to the city. More of his »Tulips« can be found outside the Nord/LB building in Hannover, Lower Saxony.

About the balloon sculptures

We have probably all – consciously or unconsciously – encountered one of Koons’ balloon sculptures, his now-signature art objects. They were inspired by the balloon animals that delight children at birthday parties and fairs. Koons turned these small things into huge, colourful sculptures with shiny exteriors made from steel that are, unlike their tiny rubber counterparts, made for »eternity«. It seems as though a happy moment from bygone days has been frozen and blown up for everyone can see. The objects have been celebrated since Koons launched them as a part of the »Celebration« series. Next to the sculptures, the series includes paintings of cakes and funny party hats. It also includes anything else that gets the mood up, from small dogs to hearts. One characteristic unites all of these objects: their shiny, mirrored exterior. Add some confetti and the party is on!

Did you know that the famous »Artpop« album cover of pop icon Lady Gaga, published in 2013, was designed by Jeff Koons? Between 2005 and 2009, the artist also collaborated with fashion house Stella McCartney to sell a platinum necklace and charm bracelet based on his expensive »Rabbit«-sculpture. The artist and his team know how to work the marketing machine! 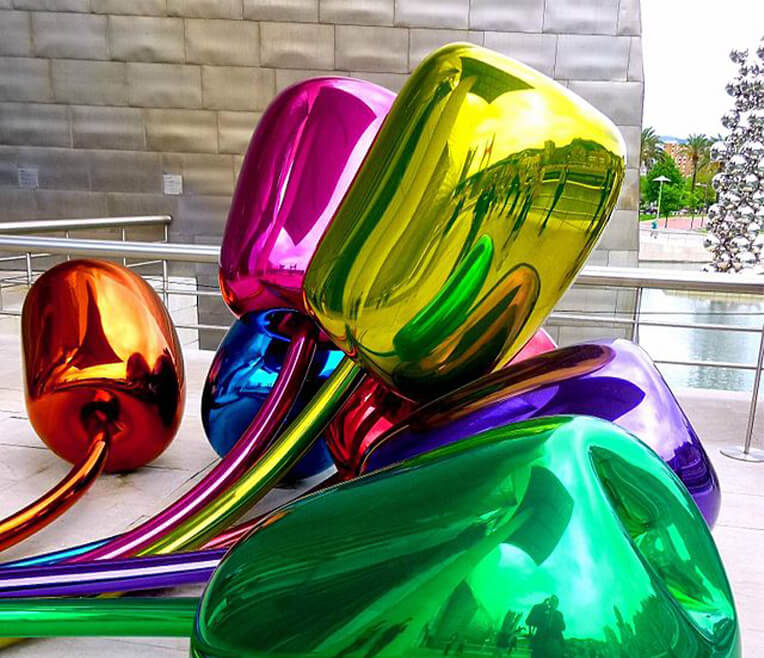 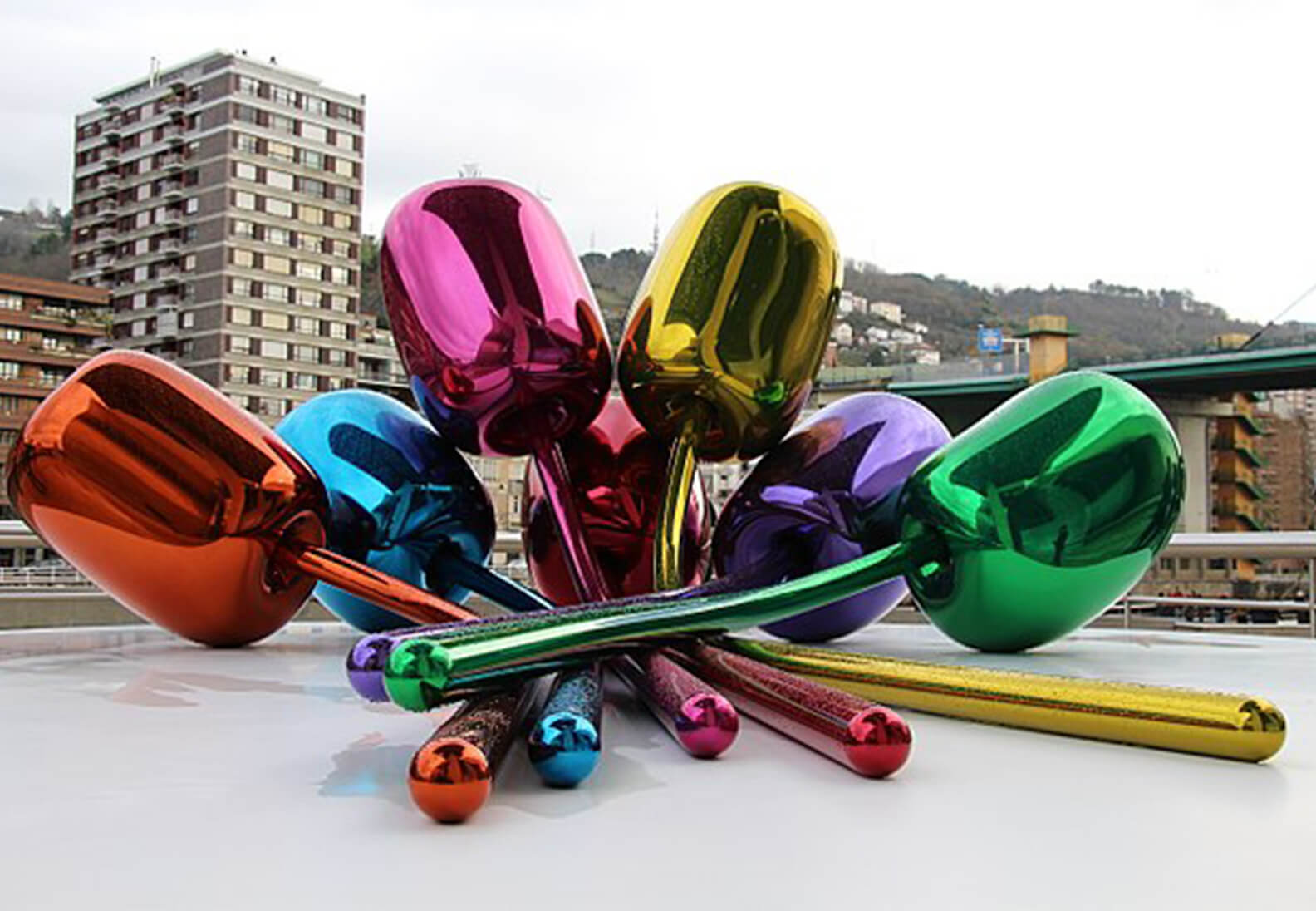 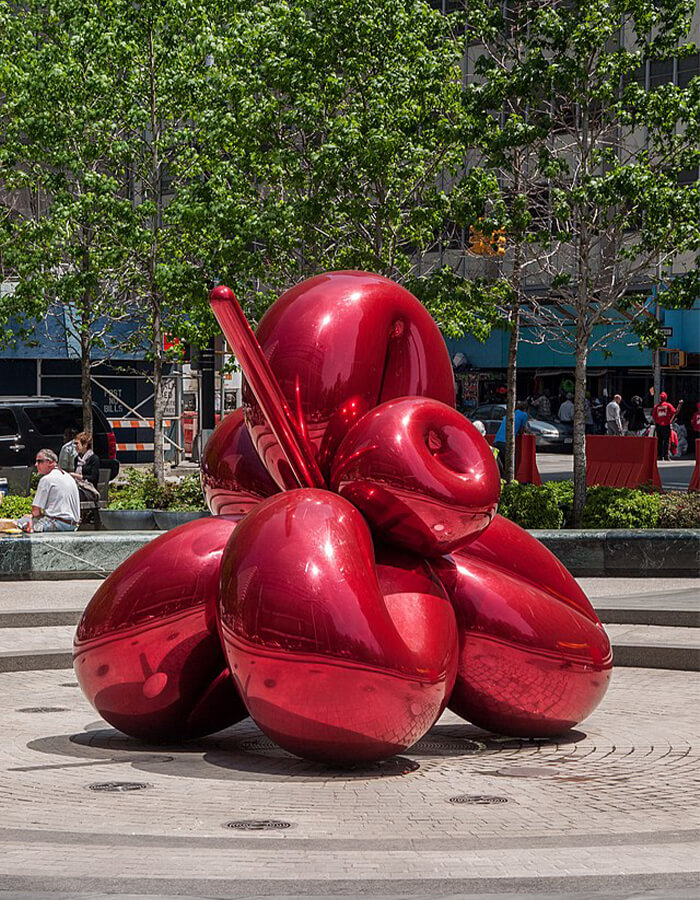 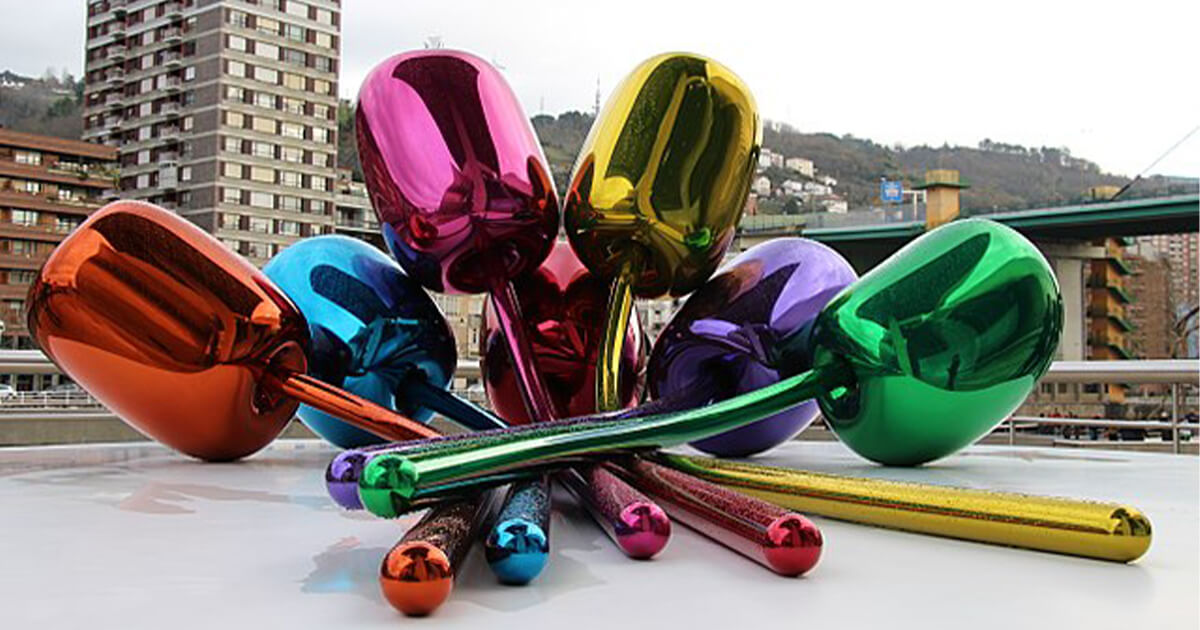