The assignment was as profitable as it was prestigious: At the beginning of the 20th century, Gustav Klimt was supposed to paint several paintings for the University of Vienna. But instead of fame and money, the artist only got harsh criticism for his Faculty Paintings. We re-traced the scandal for you in this issue of sisterMAG .

Gustav Klimt and his Faculty Paintings

Gustav Klimt was already one of Austria’s most important artists while he was still alive. Even before he created his best-known painting »The Kiss«, he was commissioned by the University of Vienna to realise a prestigious project. Its outcomes, however, brought nothing but trouble for him.

The University of Vienna is age-old – it was founded in 1365 which makes it the oldest German-speaking university in existence. Of course, the facilities are not the same as they were 650 years ago. The main building on the ring road was erected between 1873 and 1884. The initial plan of Heinrich von Ferstel, the responsible architect, was to decorate the rooms before the opening of the new building. Especially the Aula Magna with its impressive ceiling height of 17 metres wasn’t supposed to be handed over to the professors and students unadorned. However, Ferstel’s plan of putting paintings on the ceiling had to be postponed because the university didn’t have money for it.

Klimt and Matsch on the ceiling

It took ten years until the Imperial-Royal Ministry of Education approached the project again. In 1894, it commissioned the painters Gustav Klimt and Franz Matsch who worked together under the label »Künstler-Compagnie« (»Company of Artists«) to paint several paintings for the auditorium ceiling. Among others, they were supposed to paint four paintings that were dedicated to the University of Vienna’s four faculties. Matsch was chosen to illustrate theology while Klimt took over the motives for philosophy, medicine and jurisprudence. In order to not buy a pig in a poke, the artistic commission of the university demanded concrete drafts of Matsch and Klimt beforehand. Matsch handed in his drafts in 1893, Klimt’s followed one year later. The commission was satisfied and the artists were allowed to start working. They did so until 1898 when they handed in their first finished paintings. Matsch who strictly followed his drafts gained recognition – unlike Klimt. While he worked on »Philosophy« for four years, he changed his style and independently developed his ideas. His clients didn’t like that at all. Klimt presented a dark view on philosophy as he showed seeking humans instead of finding ones, like the university officials wanted. Furthermore, they saw too much naked skin in the painting.

Despite the harsh critics on his »Philosophy«, Klimt exhibited the painting in March and April 1900 in the Vienna Secession. Rapidly, a front against the artwork formed; 87 professors of the university demanded that it wasn’t put on the intended place on the auditorium ceiling. Even Franz Matsch had a problem with the work and the uncompromising attitude of his colleague, which ultimately led to a rift between the two artists. Ironically, Klimt received a gold medal for »Philosophy« at the 1900 world’s fair in Paris. At the sight of this honour, the artist started working on his second Faculty Painting. When he presented »Medicine« to the public in March 1901, the outcry was even bigger than it was for »Philosophy«. Klimt completely waived depicting the healing powers of medicine and shows naked humans, ravaged by diseases – and the inevitable death right in the middle. Since several politicians were angered this time, Klimt was even discussed in the Austrian parliament. Subsequently, the artist saw himself forced to pipe up in the newspaper »Wiener Morgenzeitung«. He wrote in his text that he had »no time« to »interfere in this bickering«. It was »too stupid« for him to »stand up against the same stubborn people again and again«. Furthermore, Klimt wrote that it’s not »significant how many people like it but who likes it«. And he himself was »satisfied«.

This was likely true for »Jurisprudence« which was presented to the public in 1903. Once again, Klimt didn’t adhere to his initial drafts – this time probably as a protest against the criticism – and once again, the artwork met with disapproval. Klimt showed the negative sides of law as well: a criminal who waits to be punished by three revenge goddesses and an oversized octopus. And there were nudes again! In the eyes of his critics, »Jurisprudence« definitively made Klimt a presenter of pornography and perversion.

After Klimt was done with »Jurisprudence«, the Faculty Paintings were exhibited together for the first time. Next to the known points of criticism, another problem appeared: The works of Klimt and Matsch didn’t match stylistically. Since the university prohibited that Klimt could exhibit his paintings at the 1904 world’s fair in St. Louis and only put the works of Matsch on the auditorium ceiling in 1905, Klimt ran out of patience. In April 1905, he withdrew from the assignment and paid back the fee he had already received from the ministry. He got financial help from the Viennese businessman August Lederer who owned »Philosophy« afterwards. Lederer also bought »Jurisprudence« shortly after while »Medicine« was purchased by the Österreichische Galerie (»Austrian Gallery«). Until his death, Klimt didn’t accept any public contracts and only painted by order of private persons.

After Klimt’s death in 1918, his Faculty Paintings were exhibited together for a few times, for example during a work exhibition on the occasion of Klimt’s tenth death anniversary in 1928. Because August Lederer was Jewish, he was dispossessed by the Nazis in 1938. Baldur von Schirach, the Reichsstatthalter in Vienna, ordered an exhibition of Klimt’s three Faculty Paintings and other works of the artist at the beginning of 1943 in the Vienna Secession before they were brought to Castle Immendorf in Lower Austria – to safety, as the Nazis thought, considering the remote location of the castle. On 7 May 1945, the day before the German capitulation, some overzealous SS officers ignited the castle so the art treasures couldn’t fall into Russian hands. It seems certain that the Faculty Paintings fell victim to the flames. However, there are wild rumours that they were brought to safety before the fire and are part of a private collection now. We’ll probably never learn the truth. By the way: All four Faculty Paintings are now attached to the ceiling of the auditorium of the University of Vienna which is known as Grosser Festsaal (»Great Ceremonial Hall«) today. Next to the only original, »Theology« by Franz Matsch, reproductions are shown that were elaborately recreated using Klimt’s sketches and black-and-white photographs. This way, the artworks came to their place on a detour. 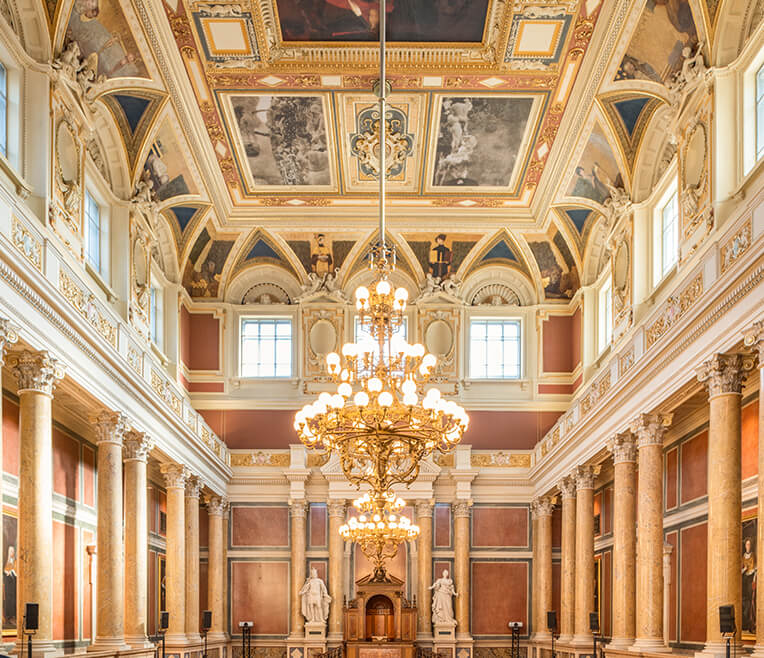 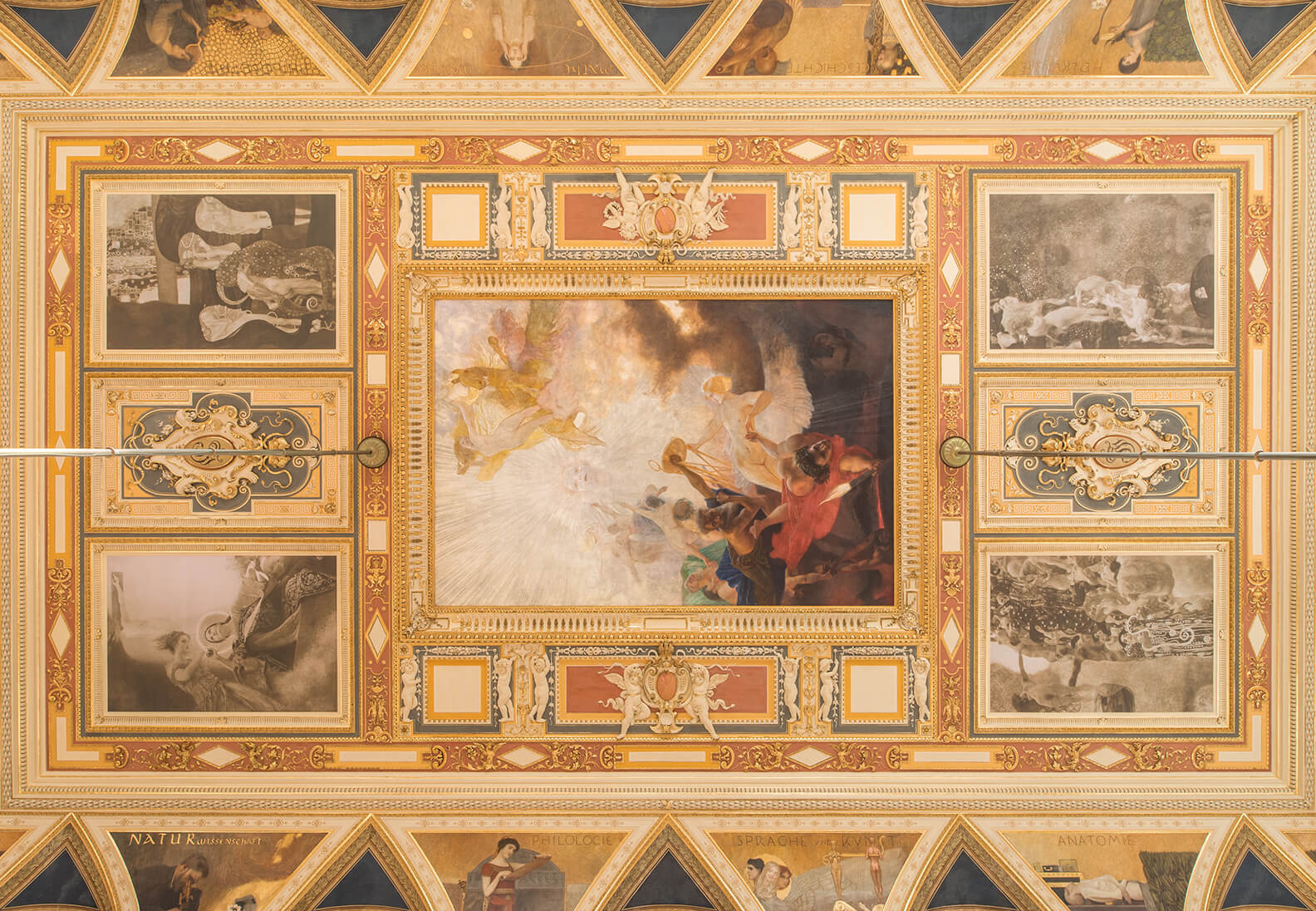 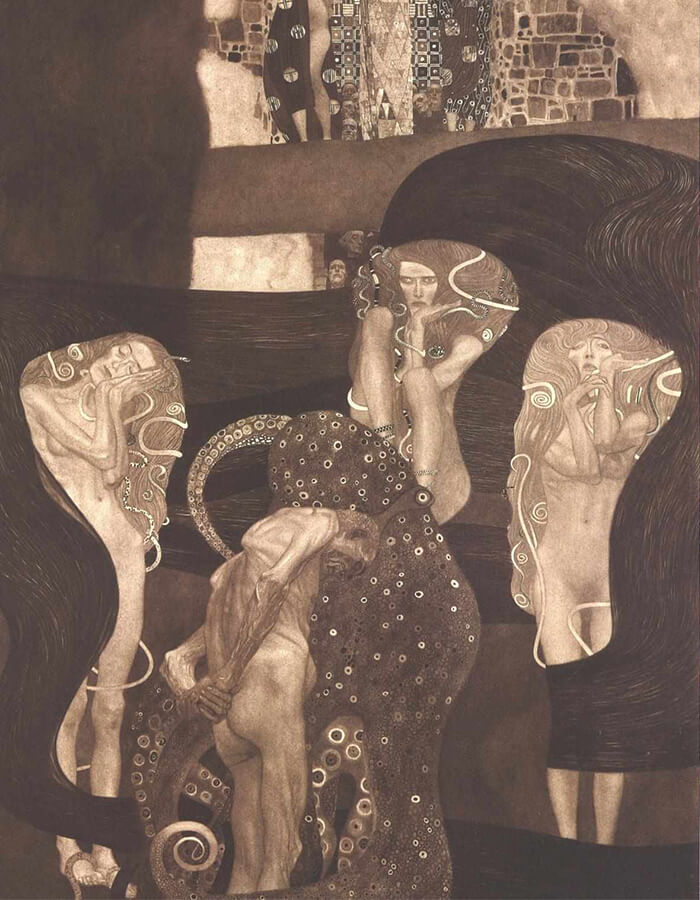 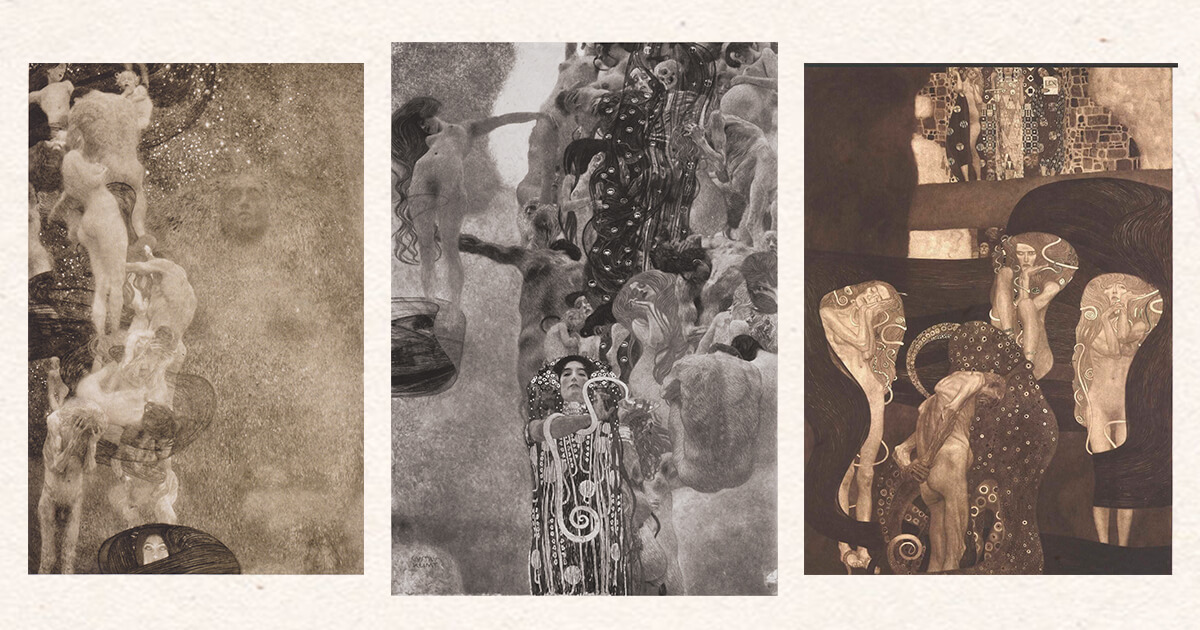