The shows where clothes play a lead role

Are you looking for new trends, cool outfits and It-labels? Simply switch on your TV or tablet, relax and be inspired by one of these thrilling or funny shows. Editor Lea Becker took a closer look in sisterMAG and picked the shows where sought-after designer handbags, painfully expensive high heels and cool accessories turn actresses into fashion icons.

Watching for the fashion

The shows where clothes play a lead role

Sex and the City

The high heel cult is born

This charming cult series featuring three open-hearted, thirty-something, single women from New York lit up our TV screens between 1998 and 2004. A much-quoted and often-copied style icon emerged in main character Carrie Bradshaw, portrayed by Sarah Jessica Parker, a sex columnist and fashionista with a love for shoes that immediately captured the hearts of millions of viewers. US-American costume designer and stylist Patricia Field was responsible for the playful feminine outfits – her own designs and the styling on »Sex and the City« got her five Emmy nominations and one win. She also won four Costume Designers Guild Awards. Field managed to create a completely new style for the time, courageously combining feminine, playful vintage dresses with loud, blingy costume jewellery, painfully expensive designer bags and the newest, sought-after high heels above 12cm by Jimmy Choo, Louboutin, Dior and more in a casual and seemingly random way. She never shied away from mixing brands or patterns, experimenting with colours or using eye-catchers like extravagant headwear. Patricia Field consciously stayed away from the more athletic It-pieces of the noughties and instead let character Carrie Bradshaw walk through life in trendy New York bars and clubs wearing quirky outfits like the iconic ballet dress with tulle skirt. This hasn’t changed in the current reboot of the series »And just like that«, which shows three of the four friends in their fifties: even if Patricia Field no longer dresses Sarah Jessica Parker, the styles are still as inspiring and the heels still as high as they were twenty years ago.

If New York was a Catwalk

»Gossip Girl« shows the lives of a group of wealthy, young teenagers living on the Upper East Side in New York: none of them have to worry about money or their social status – but thanks to drugs, mental illness or sex escapades, they all risk their good names at one point or another. The lives of these teenagers are observed by the unknown »Gossip Girl«, who watches their every step and immediately publishes mistakes on her gossip blog. The entertaining series for young adults (2007-2012) features Blake Lively as Serena van der Woodsen and her best friend Blair Waldorf (Leighton Meester) and doesn’t only have a gripping storyline but is pure inspiration when it comes to the trendy styles and designer looks of a past decade. Stylist Eric Daman – who learned his craft under »Sex and the City«-costume designer Patricia Field – brought designer fashion from Vogue, Elle & more that many a teen and tween can only dream of to TV screens. How he did it? He asked to borrow outfits from the great fashion houses such as Chanel, Dior and Valentino. They were enthusiastic about making their fashion visible for millions of viewers at very little cost to the brand. There’s hardly better marketing! Figure-hugging dresses by Proenza Schouler, super chic accessories, preppy Chanel miniskirts, blouses with puffed sleeves and luxury bags from Hermès and Chloé made the main characters style icons, whose example many young women wanted to follow. Fashion chain stores used the series as inspiration and presented collections in a clearly rich-kids-inspired style. Now, 10 years later, the series has been rebooted with a new cast. Just after the first stills from filming were published, showing the teenage cast on the stairs of the New York Metropolitan Museum of Art, fashion bloggers and fans alike frantically tried to find out which labels the dresses were from, where to shop them and how to style them with smaller budgets. Style is what you make of it – even without a full wallet, right? XOXO …

One woman on her (stylish) path

This super successful US-miniseries portrays the world-famous chess player Elizabeth »Beth« Harmon, played by Anya Taylor-Joy. Based on the novel »The Queen’s Gambit« by Walter Tevis from 1983, Beth grows up in an orphanage in 1950s Kentucky. Her talent for playing chess is discovered and nurtured – but Beth has a hard time settling into the male-dominated world and her drug and alcohol addiction stand in the way of a successful career. Costumes were made by the German costume designer Gabriele Binder, who perfectly sets the scene of old-school charm of the working class in the fifties and sixties with her simple twinsets, tweed coats in muted tones, strappy heels, leather gloves and pearl earrings. A true inspiration for fans of authentic retro classics.

Sexy Sixties – Women between the old and new world

The series »Mad Men«, on TV between 2007 and 2015, is dedicated to the lifestyle and aesthetics of the sixties in New York. It tells the story of marketing genius Don Draper who works at a well-known agency, developing ad campaigns for big labels, surrounded by attractive secretaries that willingly serve him alcohol and cigarettes. His wife Betty, played by an elfin January Jones, takes care of their home in neat twin sets and petticoat dresses, depressed that her husband is home so little. But Don’s affairs are much more thrilling than tame family life. Next to Betty Draper, Christina Hendricks plays the curvier head secretary Joan Holloway with humour, cleverness and sultry outfits with pencil skirts and deep necklines. She turns the heads of many men and has a serious love affair with her boss. Costume designer Janie Bryant knew how to create a fashionable divide between the two women, showing their different attitudes towards and roles in life: Betty Draper in girly dresses and wide skirts, pastel coloured, perfectly made up and always frustrated like a way figurine by her stove. And the funny head secretary in skin-tight dresses and high heels, often wearing tied scarves, elegant pearls and extravagant earrings to the office. Her character represents the new, more progressive woman emerging from the 1960s. Which woman or look you identify with more is your choice, but one thing is certain: when it comes to fashion, both ladies get full points!

Fashion is the principal character

Crazy colours, wild patterns, designer high heels and berets: The former »Sex and the City«-stylist Patricia Field has been giving the characters of hyped Dramedy-series »Emily in Paris« their textile identity since 2020. The screenplay for the newest It-series of the fashion crowd was also written by one of the SATC-writers – no surprise then, that fashion is not a supporting character. The looks of leading actress Lilly Collins as American Emily Cooper, who moves to Paris for her dream job at a marketing agency and subsequently suffers from culture shock, are awe-inspiring. Full of enthusiasm, the twenty-something begins her life in the capital of fashion. She doesn’t adapt to the famed, strictly elegant French style but wears contrasting, colourful designer clothes – preferably miniskirts. Her accessory however is a French classic: the beret. According to online research, »Emily in Paris« is one of the most influential series of our time: The clothes are being googled millions of times within days of a new episode coming out and they’re also selling thousands of times. The third and fourth seasons were recently confirmed.

While most of us spent the Covid-pandemic of 2021 on our sofas wearing loungewear, not particularly active in our fashions, Netflix launched the series »Bridgerton«. The sensual period picture started a real Regency-fashion hype (#regencycore) and was mostly talked about for its erotic scenes and the diversity of actresses and actors. Costume designer Ellen Mirojnick re-interpreted the fashions of Great Britain in the 19th century. Little in »Bridgerton« is true to historic references, with most costumes being made of modern fabrics in bright colours. But that’s exactly what viewers like – and they like it so much that romantic, playful styles of empire-waist dresses, pearls, corsets, puffed sleeves, pleated tulle skirts and pretty dressing gowns are fully back in style. This is exactly the distraction we need right now – and we’re anxiously awaiting season two!

For six years, »The Crown« has been running on Netflix, showing the partly fictionalised story of the British royal family since 1947. With so much history, drama and glamour, the fashion is all Brit Chic, preppy looks and the iconic pastel-coloured sets of Queen Elizabeth II next to the big ballgowns. Costume designer Amy Roberts has most of the wardrobe (around 300 costumes) tailor-made: a huge undertaking and a big nod to fashion. Since 2020, the royal time travel takes us through the 1990s. Princess Diana, portrayed by Emma Corrin, is now one of the main characters. Her outfits are inspired by late Lady Diana’s typical looks: Chanel sets, Peter-Pan-collars, cowboy boots, high-waist jeans, bike shorts and oversized blazers with shoulder pads. All of these pieces remind us of the most photographed woman in the world who was a fashion influencer in her own right even thirty years ago. 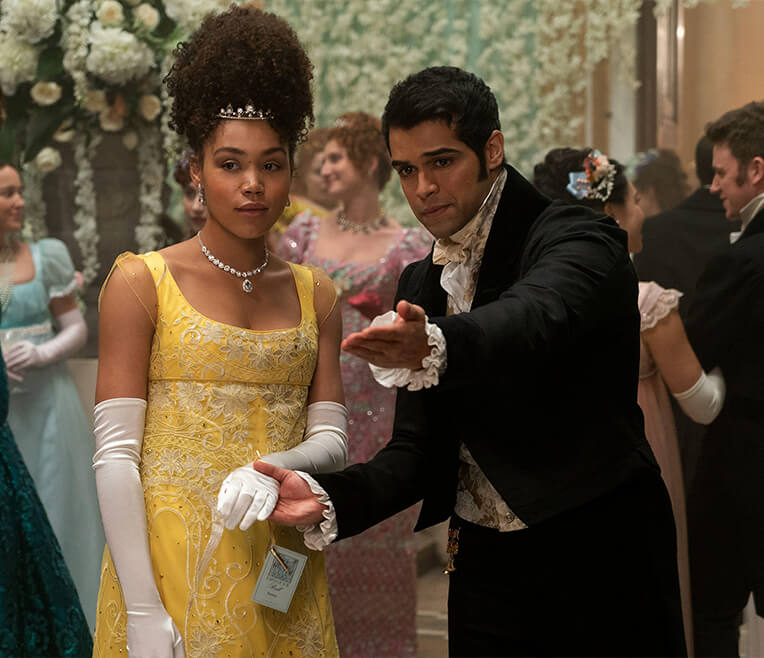 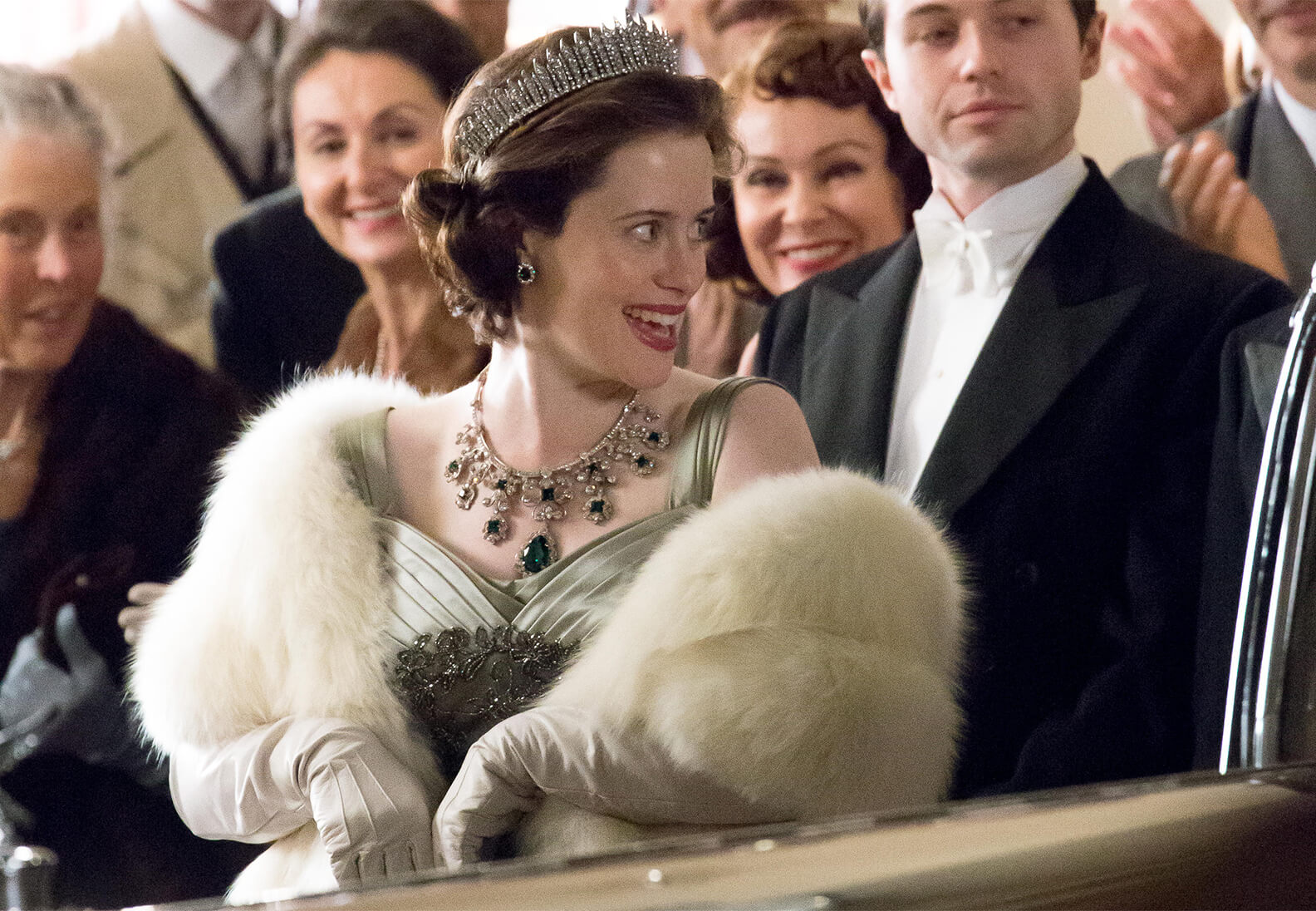 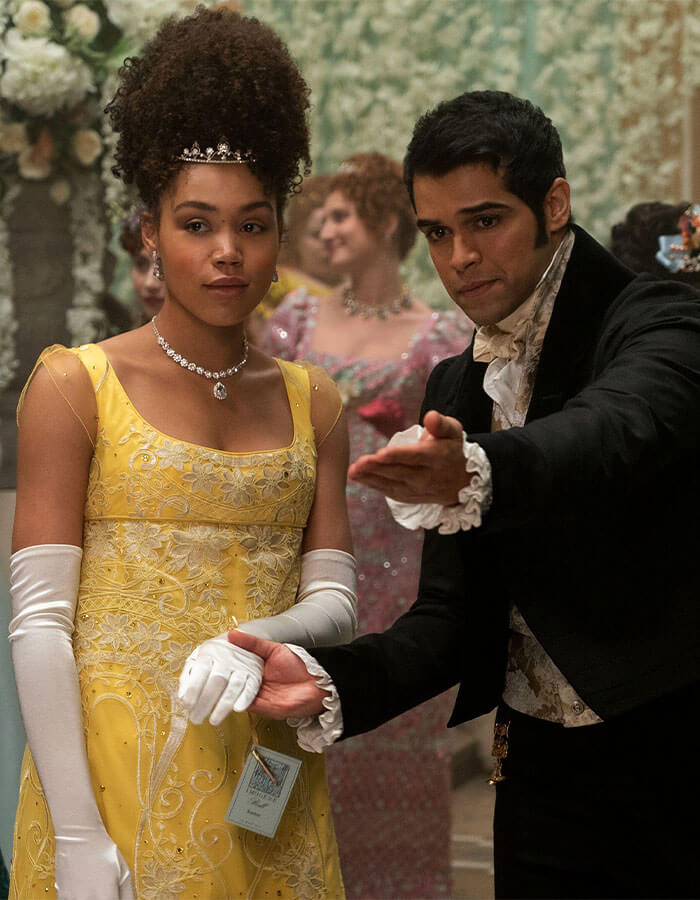 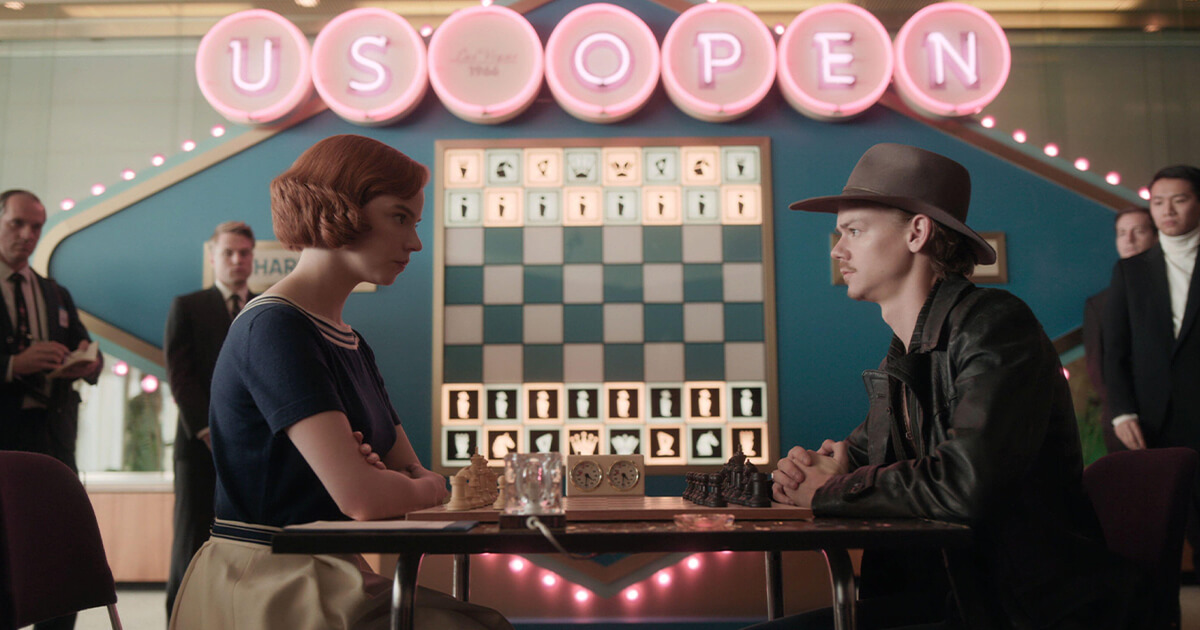