The rise of the raincoat

In sisterMAG No. 63, fashion editor Marie Jaster once again takes a look at the catwalks of this world. This time she takes a closer look at rain jackets and rain fashion in general and presents her 5 favorite companions.

From trenches to catwalks

The rise of the raincoat

I envy all those who have never heard: »There’s no bad weather, just bad clothing.« While there is some truth to the sentence, it usually comes up in situations when it is truly the last thing you need to hear. For example, at a wedding at the end of August, wearing a dress that has been carefully chosen after months of searching, not considering a sudden early start of winter at 12°C. When you’re cold and annoyed at the weather gods and yourself, such a know-it-all statement may just tip you over the edge.

But fear not, this article is here to help so you don’t have to suffer like that this fall. Today, we’re looking at rain clothes, rain boots and waterproof materials – and if you’re an avid fashion lover about to skip the following, stay with us just a little longer: we’ve found that weatherproof dressing can indeed be fashionable. Proof can be found in countless collections of high fashion designers.

A piece of clothing with lots of history

The history of rain clothes that we’re about to dive into shows, that waterproof dressing has always been en vogue. There’s the first waterproof coat by Macintosh, dating all the way back to 1823: that year, chemist and inventor Charles Macintosh invented a waterproof cotton fabric, sealed with textile colours that dissolve in rubber. After a few improvements of the material, the famous coat quickly graduated to become the uniform of the British police and was worn by the soldiers of the United Kingdom in both World Wars. Today, the term Macintosh is almost synonymous with the term rain coat.

The English weather inspired a second iconic rain coat: the trench coat. It was invented a little later than the Macintosh, at the end of the 19th century, by Thomas Burberry. The first step was made by Burberry in 1870 with the invention of gabardine, a specially woven fabric that is extremely durable and water-resistant. It, too, was worn by soldiers in World War I, but in the 1950s Hollywood stars like Humphrey Bogart and Audrey Hepburn elevated it to fame.

Around the same time, the first rain-proof shoes were invented, the rain boot. US-American Hiram Hutchinson bought a licence for the production of rain boots from Charles Goodyear in 1953 and started his own factory shortly after. Henry Lee Norris followed suit in Scotland and presented the iconic green rain boot in 1955. Both companies still exist today under the names of Aigle and Hunter Boots. Until today, they stand for one thing: dry feet.

In 1969, Robert W. Gore discovered the material Gore-Tex, which was introduced to the market in 1976. Rubber boots were replaced in their function in the 80s and Gore-Tex experienced its peak here.

So after humans had been subjected to rain for centuries, working the fields and defending the trenches in wooden shoes, the invention of waterproof clothing and shoes is a comfortable and much needed improvement to living conditions. With today’s stable buildings, jobs in offices and infrastructure such as trains, cars and busses, we are not subjected to weather conditions as much as we used to be, but still rain clothes are an elemental part of most wardrobes. And who would mind, as rain clothes become less rustic and more and more fashionable while also being practical? Here’s proof:

Rain on the runway

Iconic rain pieces like the trench coat, Macintosh, rain boots and umbrellas – and the functional rain jacket make a return every fall and winter as the cold seasons are the ideal time to sell functional clothing. There’s Bottega Veneta making rain coats fashionable and chunky rain boots look stylish – there are now considerably less suffering fashion icons to be seen in the rain at fashion weeks. They are all dressed in colourful boots by favourite Bottega Veneta.

A common favourite is the classic rain coat. The transparent version has become a festival cape at Dolce & Gabbana, there’s an anorak jacket at Christian Dior, a patent trench at Isabel Marant and models with metallic finish at Chanel … as it rains everywhere around the world, the regular customers of luxury brands are obviously in need of luxurious versions of the rain coat.

Waterproof and down for business – 5 rain companions

Those of us who do not have the budget to strut through the rain in Chanel rain boots, Bottega Veneta coat and Dolce & Gabbana cape don’t have to be disappointed though: there are many brands, traditional ones and newcomers, that have discovered the potential of functional clothing. They offer dry protection from wet and wind in very fashionable versions. Here are my Top-5-Lifesaver for the next weather low.

Ever put considered thoughts into an umbrella purchase? Probably not – and that’s the problem. At home, the cheap emergency purchases are piling up from days when you get surprised by bad weather. Not exactly sustainable. Now Larissa Hunekohl, Ramona Hartmann and Carla Dikdur have a solution with Studio Wetter, founded in 2020. They offer beautifully designed, sustainable produced umbrellas that will make you look forward to the next rainfall.

The name Rains is pretty clear. And it’s exactly what the brand wants to protect its customers from. Staying dry is at the core of the Danish brand selling jackets, waterproof shoes, backpacks and bags, hats, blankets and more. Safety first!

For Stutterheim, we travel from Denmark to Stockholm. They’re familiar with rain up there and have distilled their knowledge into products. In 2011 Stutterheim was founded and their waterproof rubber jackets are now a staple in our closets. Their forte? Exciting design collabs with rising fashion labels – including products for kids and dogs!

Admittedly, Ganni might not be the first company you think of when it comes to rain clothes but the Danish super brand is – together with Bottega Veneta – mainly responsible for making rain boots a fashion statement. That’s why they belong on the favourites-list. Next to the chunky boots that look amazing with playful dresses and miniskirts, they have hooded jackets every season. Waterproof and fashionable? That’s Ganni!

Now onto another icon of rain jackets next to Burberry, Macintosh and Aquascutum: Barbour have been known to make waxed jackets since 1894, worn on hunting trips by aristocrats. They are weather proof and traditionally come in a green shade perfect for camouflaging. Princess Diana turned the elite item into a cool piece in the 90s and today, Barbour is known for its stylish collaboration with It-Girl Alexa Chung. No matter whether you’re in a castle or at a festival: a Barbour always looks good. 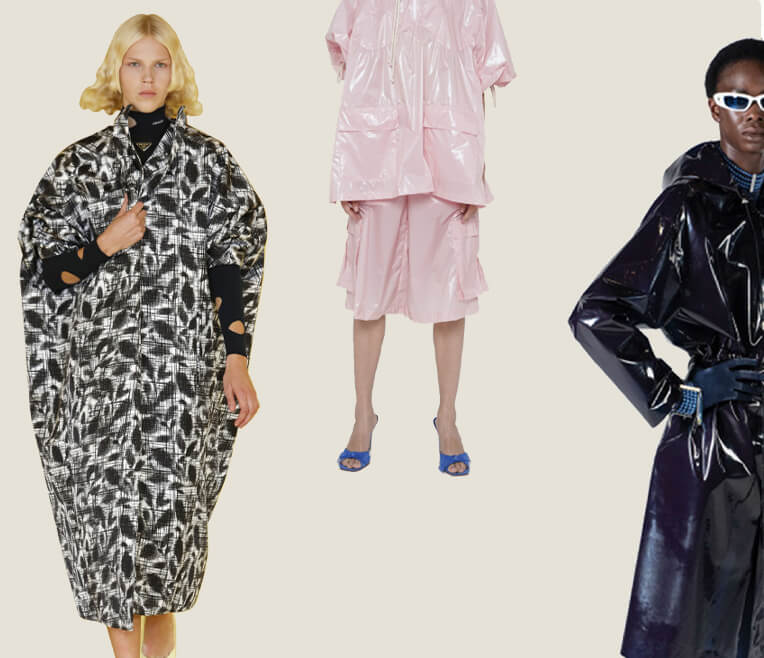 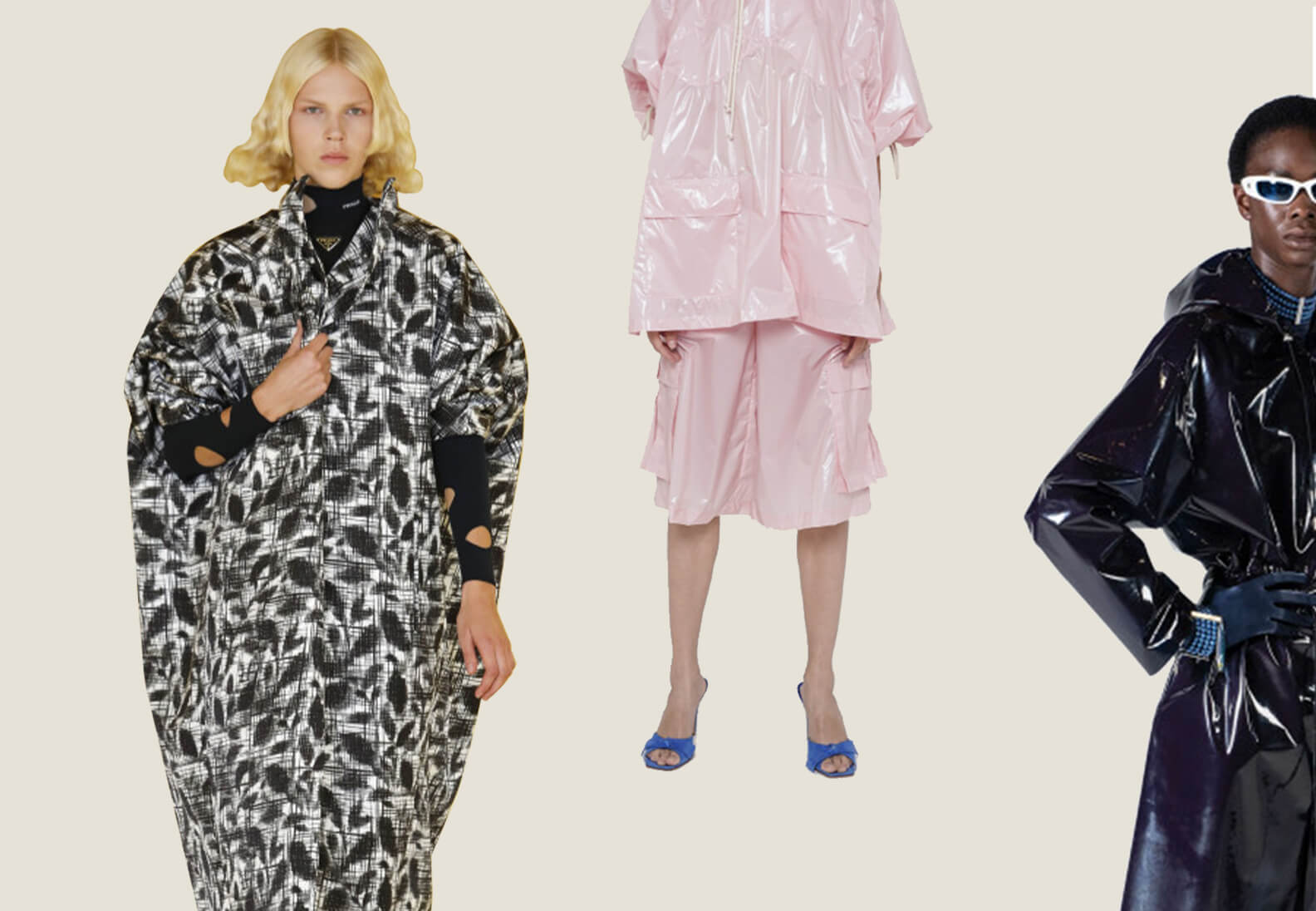 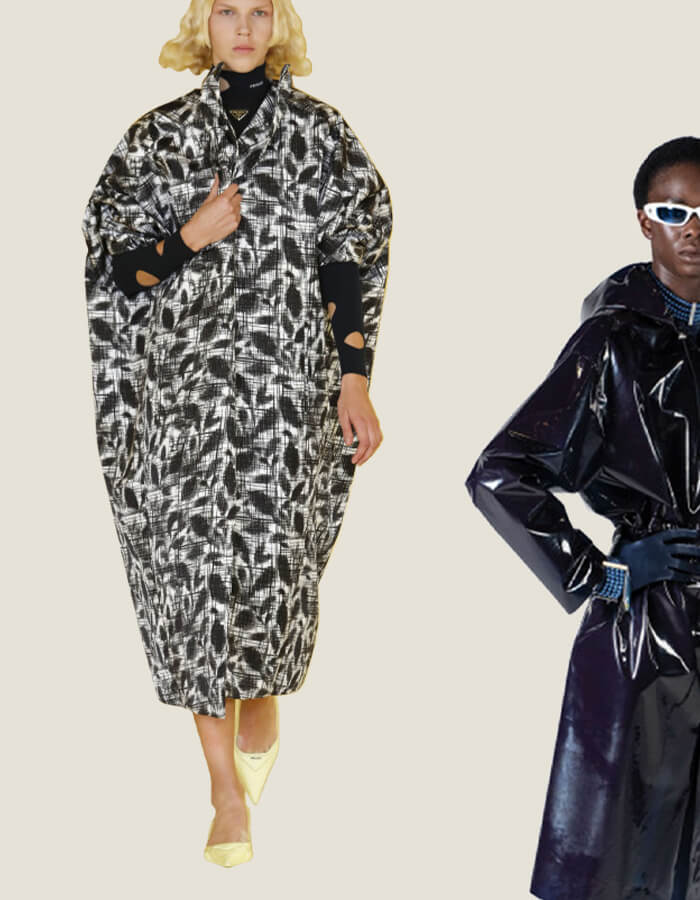 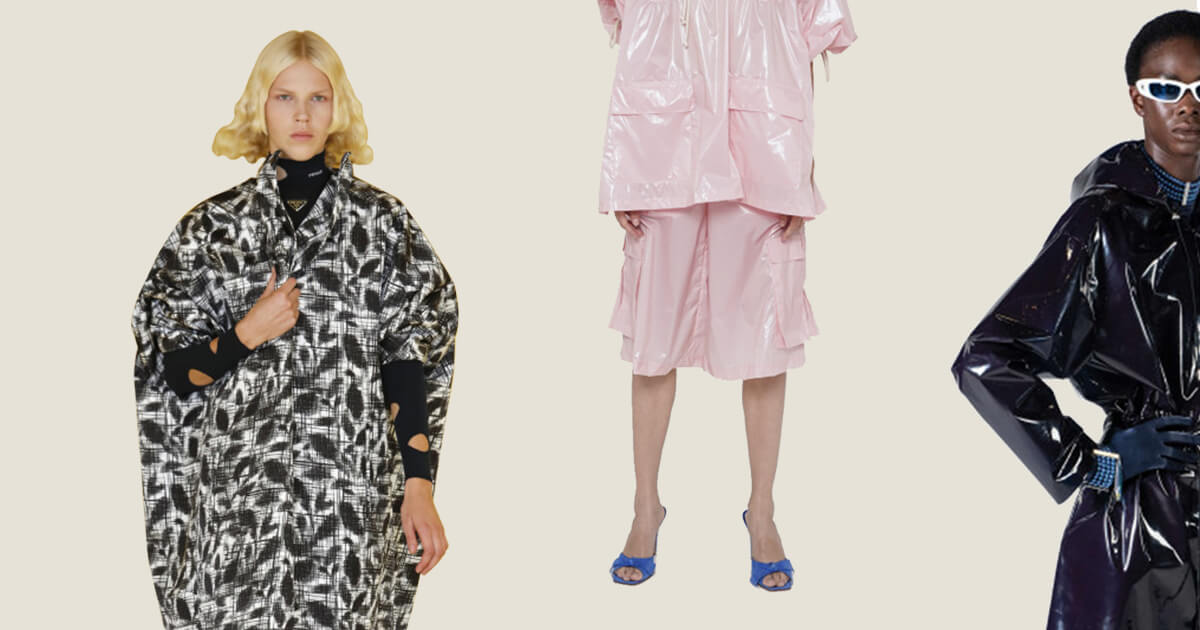