A little homage to the hat in sisterMAG. Author Dr. Michael Neubauer tells a short cultural history about the hat as a fashion accessory and at the same time introduces you to the different types of hats for women and men. Maybe you feel like wearing a hat now?!

Freedom comes only to those who wear a hat

It’s a shame, really. How often do you meet a man or woman wearing a hat these days? One that turns necessary headgear into a fashionable accessory? What an honourable event, when a man tips his hat in honour of the person to be greeted or takes it off when entering a room. Or how many different ways ladies embellish their outfit with a pork pie or florentine hat.

No, modern headwear is different. If it is really cold and you have to shield your ears with earmuffs, the metal bow should be free of fuss. Hats flatten the hair, are quickly blown away, or cause headaches if they don’t fit properly. Maybe there’s something to be said for beanies and baseball caps? After all, they are practical, easily stored, quickly cleaned and do their actual job of warming the head and protecting from rain or intense sunlight. Still, hats are simply more beautiful!

A brief history of hats

It’s no wonder that hats have evolved with civilization. Headwear has appeared in all eras, though hats have been en vogue throughout the centuries. For example, the male Greeks wore a conical felt cap, called a pilos or a Phrygian cap, and a wide-brimmed hat with chin straps, a petasos. It could easily be pushed back as well as brought forward in the heat. Women were just as much a fan of the hat as men.

Hats were not common among the Romans, except for the helmets in which they conquered Europe. The hat even had a special meaning, as a symbol of freedom. Slaves never wore one. Particularly during the Imperial period, Roman women had their hair done so elaborately that a hat would only have served as a nuisance.

In the Middle Ages, simple straw hats, mainly for work in the fields, became popular. Men liked to wear a chaperon, while women were content with a turban and veil.

In the early Renaissance, women again wore hats such as a sella, which is a less conspicuous version of a hennin. It is essentially a bonnet in the shape of a pointed or blunt cone from which a veil hung down. Berets in various shapes came into fashion, which increasingly defined both sexes from the 16th century onwards. Even the Thirty Years’ War created new hat shapes for men, like the Ruben hat with feathers, which was also called the floppy or cavalier hat. Women wore caps or simple scarves.

Not satisfied with the bulky, broad-brimmed hats of the time, Baroque gentleman, who held themselves in high esteem, topped their heads with a protective wig and then decorated it with a so-called tricorn. Wealthy women of that time balanced large, elaborate feathered hats on their heads. The simple ones put on a bonnet.

Over the years, the tricorn hat changed into a bicorn (Napoleon Bonaparte) and the gentlemen, after wearing a beaver fur hat, adopted the top hat. At the beginning of the 19th century, women adorned themselves with lace bonnets and then progressed to strikingly decorated barges. The men remained true to their top hats.

At the end of the 19th century, gentlemen gradually swapped their top hats for a round, stiff variety called the bowler hat. Women complemented tight dresses with large hats decorated with flowers, veils or feathers. In the Roaring Twenties, the canotier style, also called boater hats, came to prominence. The young, pretty ladies wore wide-brimmed or bell hats (cloche). In addition, they liked all the shapes and styles we still carry today.

After the Second World War followed a decade in which the hat gained new-found importance for both men and women. It became a staple in dress with limitless possibilities and variations. That all changed after 1960 – the era of the cap. It was annoying to wear dressy hats in one’s car and they became a symbol of old-fashioned expression following the student protests of 1968. A glimmer of hope emerged when James Bond sported a slick trilby in a movie.

Slowly but surely, the young generation is again enjoying refined headgear. Hats are well represented on catwalks around the world and in fashion magazines. It must be said that they are simply chic. For some occasions – federal ceremonies, weddings or stately funerals – there is no excuse not to adorn a hat.

In the past, hats were usually made from sheep’s wool, beaver fur or rabbit hair. Straw, leather, certain papers, cotton, linen and synthetic fibres were also popular.

The standard hat consists of a crown (head) with or without a crease, the brim, and a ribbon on the outside. Inside you should find a sweatband with a bow and the lining. Decorative accessories or even a chin strap are individually attached.

The significance of hats

The hat protects and accessorises, but it is also a symbol. It signals membership of a certain group, like a heritage club or, more importantly, a religion. Jews wear the kippah. Orthodox Jews’ style differs in clothing and hat shape, e.g. a kneitsch or a shtreimel. The police, fire brigade and military all use headgear to distinguish their profession, like many others. After 1848, grey felt hats with a wide brim – a form of trilby – were banned after they were adopted by supporters of the democratic revolution in Germany. Similarly, in the 1880s, women used a hat worn in a play called fedora as a symbol of the women’s movement. Of course, we called this hat the fedora to this day. Special hat designs are used to distinguish particular fields –the doctor’s hat, the pope’s zucchetto or the mitre of the bishops.

The hat has always been a symbol of belonging to a certain social class. The boss wore the hat, the chauffeur the cap. Fortunately, those times are mostly over. And because they are, I want to encourage everyone to bring back the hat. It’s much more than fashion – it’s a confession. Especially to what we are increasingly missing in fashion: style. It would definitely liven up our street scene and empower individuals to consider what goes best with what’s on their head.

A selection of common hat styles

The pork pie is a flat, circular, firm felt hat with a narrow, open brim.

The bell (cloche) was created in the 1920s. The bell has a narrow, downward curved rim.

The wide-brimmed hat has a wide range of designs. Common to all of them is that the brim is completely or partially opened.

The florentine hat is a striking wide-brimmed straw hat, flat, often decorated with flowers and a long ribbon flowing at the back.

The floppy hat is distinguished through its wide brim, which surrounds the crown like a wave; it is usually felt but can also be made of other materials.

The capote is a small lady’s hat with a narrow circular brim and sometimes comes with a chinstrap.

Many male hat designs are also worn by women today.

The fedora is a classic men’s hat with a wide but variable brim. The crown is folded at the top and pinched at the front on both sides. It is made of soft felt. Famous example: Borsalino.

The city hat is also made of felt, though it has a narrower brim that is pulled down at the front and back; the crown is pinched in on both sides at the front.

The trilby‘s head is folded in the middle, which gives it a striking narrow brim.

The Charpentier or calabrese or carpenter’s hat is made of weatherproof felt. The crown is hemispherical, and the brim is wide. No creases.

The homburg is a high, stiff felt hat, with a firm brim that’s curved upwards and a pinched crown.

The melon or bowler hat is firm and round with a turned-up brim.

The canotier or jigsaw hat or boater hat is round and made of straw; the crown is flat; the brim is flat and stiff. 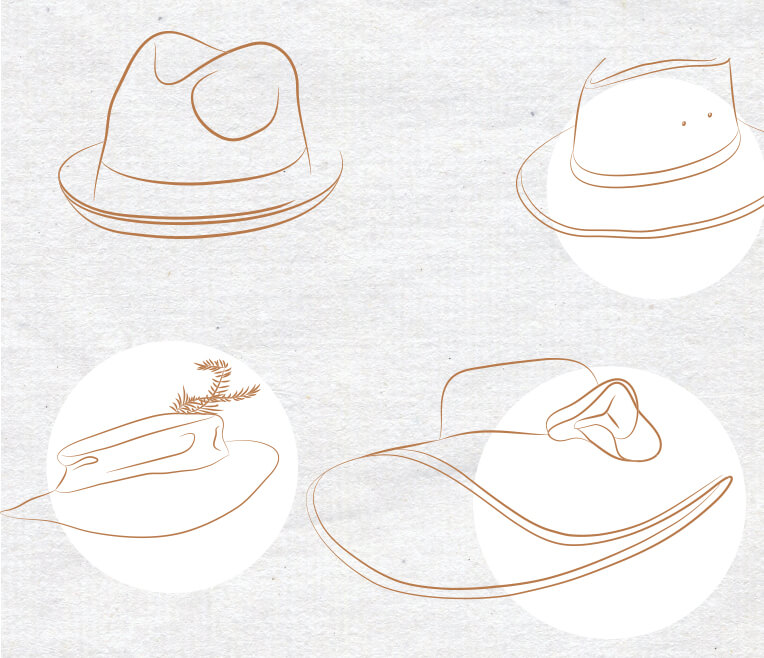 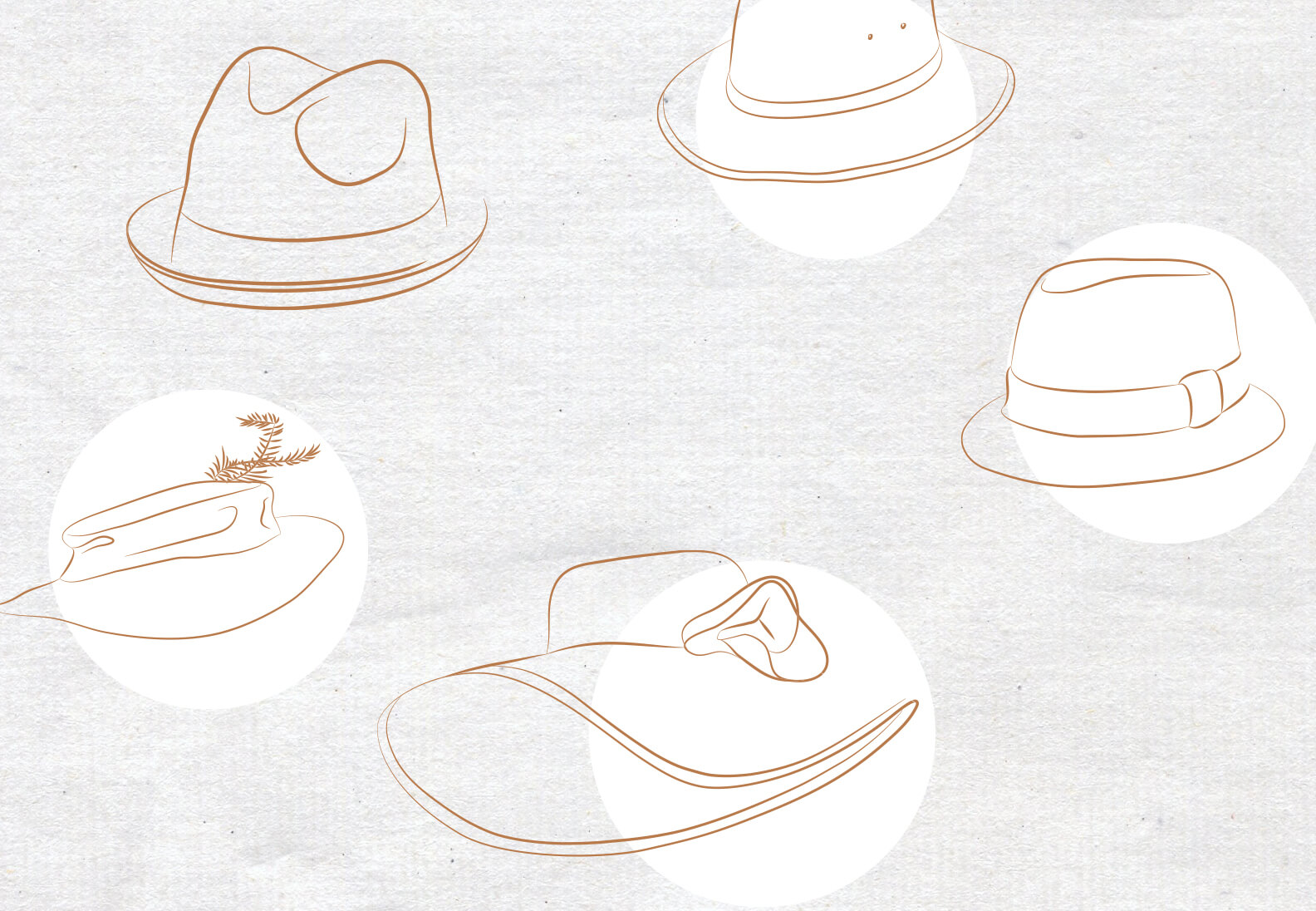 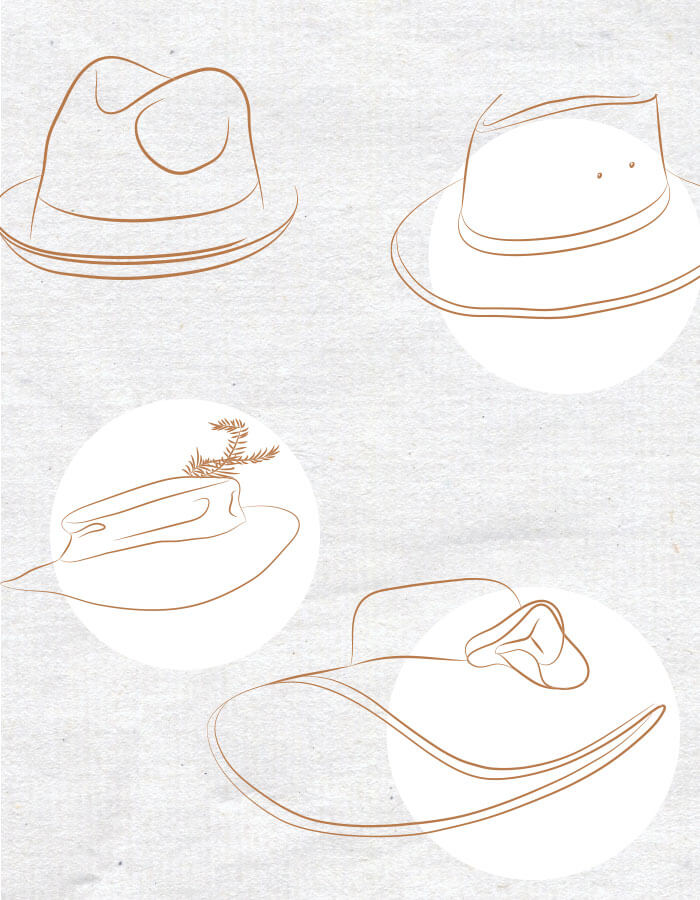 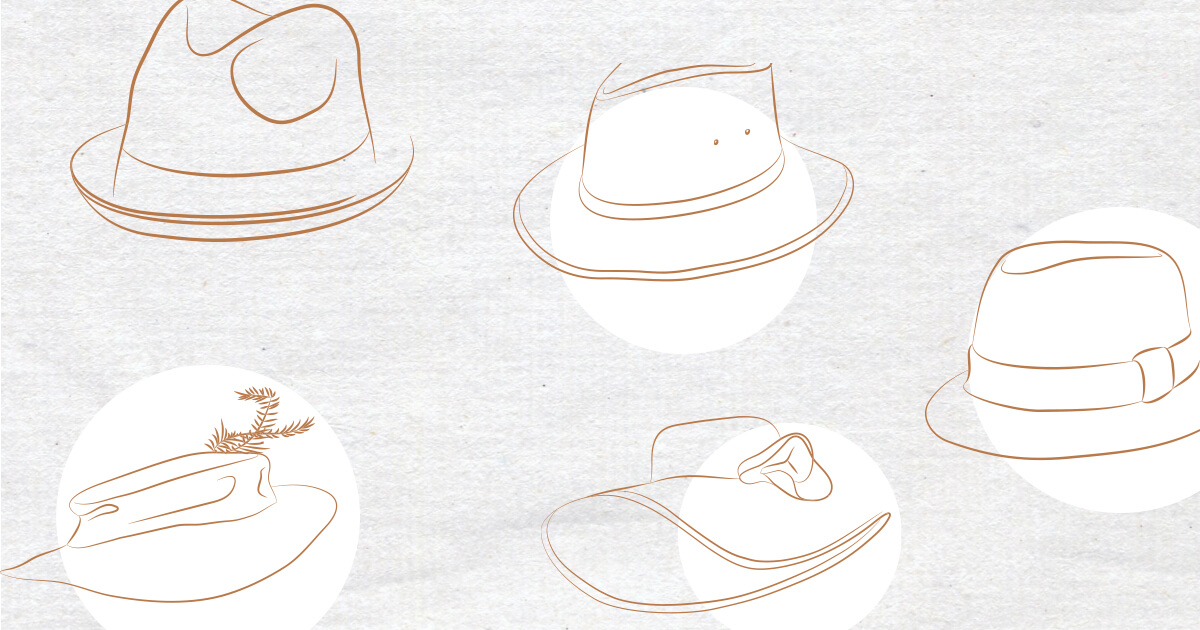