»Girl with a Pearl Earring« (1665) by Jan Vermeer is one of the classics from the European history of art! Caro from sisterMAG talked to curator Lea van der Vinde at the Mauritshuis in The Hague, the current home of the painting, about Vermeer and his art. What informs his style of painting? Who is the »girl« and what else does the museum have to offer? Read all about it here.

Interview with the Mauritshuis in The Hague

Curator Lea van der Vinde about Vermeer and his art

The Dutch painting holds a special place in European art history. Therefore, it is time for us to use a real classic in sisterMAG! »The Girl with the Pearl Earring« (1665) by Jan Vermeer is a worldwide-famous masterpiece that we want to explore in more detail in this issue… With the curator Lea van der Vinde from the Mauritshuis in The Hague where the original artwork is located, we talked about Vermeer and his influence on the art world.

First, a general question: Who was Jan Vermeer and what characterises his style of painting?

Johannes (or Jan) Vermeer (1632-1675) spent his whole life in his native Delft, a thriving city which was an important centre of trade and industry. His father worked as a silk weaver, inn keeper and art dealer. In 1653 Vermeer married Catharina Bolnes – the couple eventually had 15 children, four of whom died young. Vermeer was active as an artist, but like his father he was also an inn keeper and art dealer. He died at the age of 43, leaving his wife and underage children in financial difficulties. A rather sad end to the life of an artist who is now considered, along with Rembrandt and Frans Hals, one of the most important painters of the Dutch 17th century.

Compared with the output of painters such as Rembrandt and Hals, Vermeer’s surviving oeuvre is exceptionally small: only 36 paintings by his hand have been preserved. He must have made more but works of art do not always survive the ravages of time. Vermeer probably worked long and hard on each painting, especially as his technique became increasingly refined over time. He started his career with large paintings depicting biblical and mythological scenes (like »Diana and Her Nymphs« at the Mauritshuis), but soon he began to concentrate on what we call ‘genre scenes’ – scenes from everyday life – on much smaller formats. He also painted a few cityscapes, the most well-known being his famous »View of Delft« in the collection of the Mauritshuis. An important characteristic of Vermeer’s style of painting is the use of small dots of paint to create an illusion of light playing on the surface of an object. After 1660 Vermeer began to use these light effects more sparingly and painted contours in a softer, more diffuse way. It was at this point in his career, around 1665, that Vermeer painted »Girl with a Pearl Earring«.

Who shows the famous painting »The Girl with the Pearl Earring« (1665) and what is its context of creation?

No one knows the true identity of the »Girl with a Pearl Earring« and this will probably always remain a mystery. The model could have been someone from Vermeer’s family or inner circle, but this certainly does not need to be the case. The reason her name remains unknown mostly has to do with the fact the painting is not a formal portrait. It is a type of painting that the Dutch in the 17th century called a »tronie«, which means »face«. These were highly popular study-like paintings that depict heads or faces of certain characters or types rather than recognizable persons. Sometimes these were ‘exotic types’, which is also the case with the »Girl with a Pearl Earring«. She is wearing a turban-style headscarf – Dutch girls in the 17th century typically did not wear turbans. Vermeer used this accessory to turn his model into an exotic, Eastern figure. Also, the eye-catching, oversized pearl earring adds to the exotic air of the painting. The girls’ idealized, beautiful face and her unusual attire lend the picture a timeless, even mysterious character.

How can the work be located in art history: what shaped the period in which Vermeer was an artist?

Vermeer’s choice of subject pose and costume for the »Girl with a Pearl Earring« seems to have been inspired by the work of a contemporary artist from the Southern-Netherlands, Michael Sweerts. We think Vermeer knew some of his paintings. Sweerts painted quite a few bust-length figures with brightly lit faces against dark backgrounds, quite similar to the »Girl with a Pearl Earring«. These character studies by Sweerts were also »tronies«, instead of traditional portraits. However, the artist who really popularized »tronies« in Dutch painting was Rembrandt, who was already specializing in these types of paintings in the 1630s. He also used anonymous models for his virtuoso studies, which stand out because of their strong play of light and shadow, as well as the eccentric clothing and accessories of the figures.

Since when is the painting in the possession of the Mauritshuis? Is it exhibited permanently?

The painting entered the collection by a ‘secret bequest’ from the Dutch art lover and collector Arnoldus des Tombe in 1903. He had bought the painting at an auction in The Hague in 1881, where he, together with a befriended art historian, recognized the painting as a work by Vermeer. Nobody else did, as Vermeer was not as famous at that time as he is nowadays, so Des Tombe managed to buy the painting for a mere two guilders and thirty cents, an unbelievable bargain! The painting was already displayed in the Mauritshuis in 1881 but has been (almost) permanently on view in the museum since it was gifted to the museum in 1903. The painting was part of the once-in-a-lifetime monographic exhibition of Vermeer’s oeuvre in 1995-1996, which was organized by the Mauritshuis and the National Gallery of Art in Washington D.C. »Girl with a Pearl Earring« has also been part of a travelling exhibition of highlights from the Mauritshuis collection in 2012-2014, when the museum was temporarily closed for a huge renovation and expansion project. But these were very special occasions – when you visit the Mauritshuis in The Hague you can be sure to find »Girl with a Pearl Earring« at her permanent spot in the museum!

Finally, what other works of art do visitors expect besides Vermeer’s masterpiece in the Mauritshuis in The Hague?

The Mauritshuis boasts one of the greatest collections of Dutch 17th century art in the world, housed in a building from the same period. Visitors will find three paintings by Vermeer but also a strong collection of works by Rembrandt. Other renowned paintings are the »Laughing Boy« by Frans Hals, the iconic »Goldfinch« by Carel Fabritius and the impressive »Bull« by Paulus Potter. In the intimate museum rooms, you will also find masterpieces by Rubens, Holbein, Jan Steen, Jacob van Ruisdael, Hendrick Avercamp and many, many others. Certainly, also noteworthy are the splendid works by masters that are less well-known, like the female still-life painter Clara Peeters, or a unique flowerpiece by Dirck de Bray. 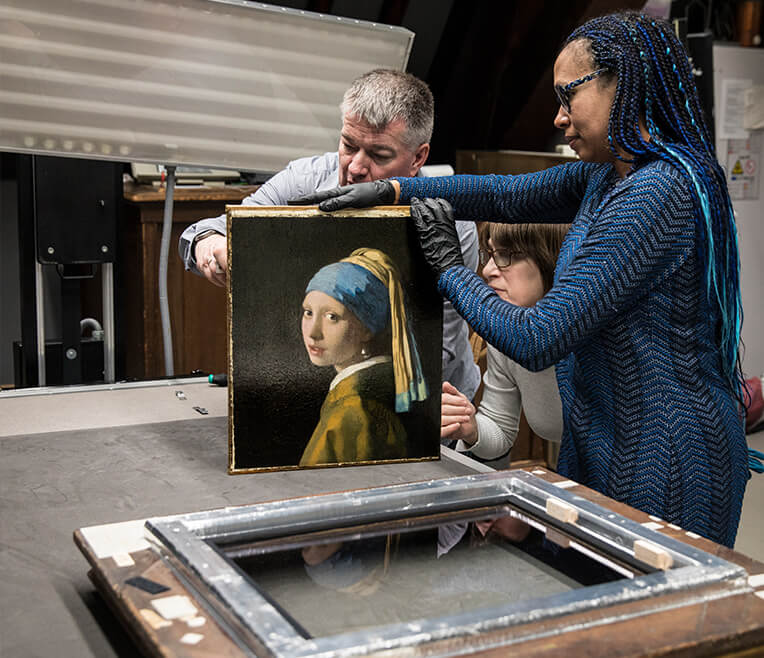 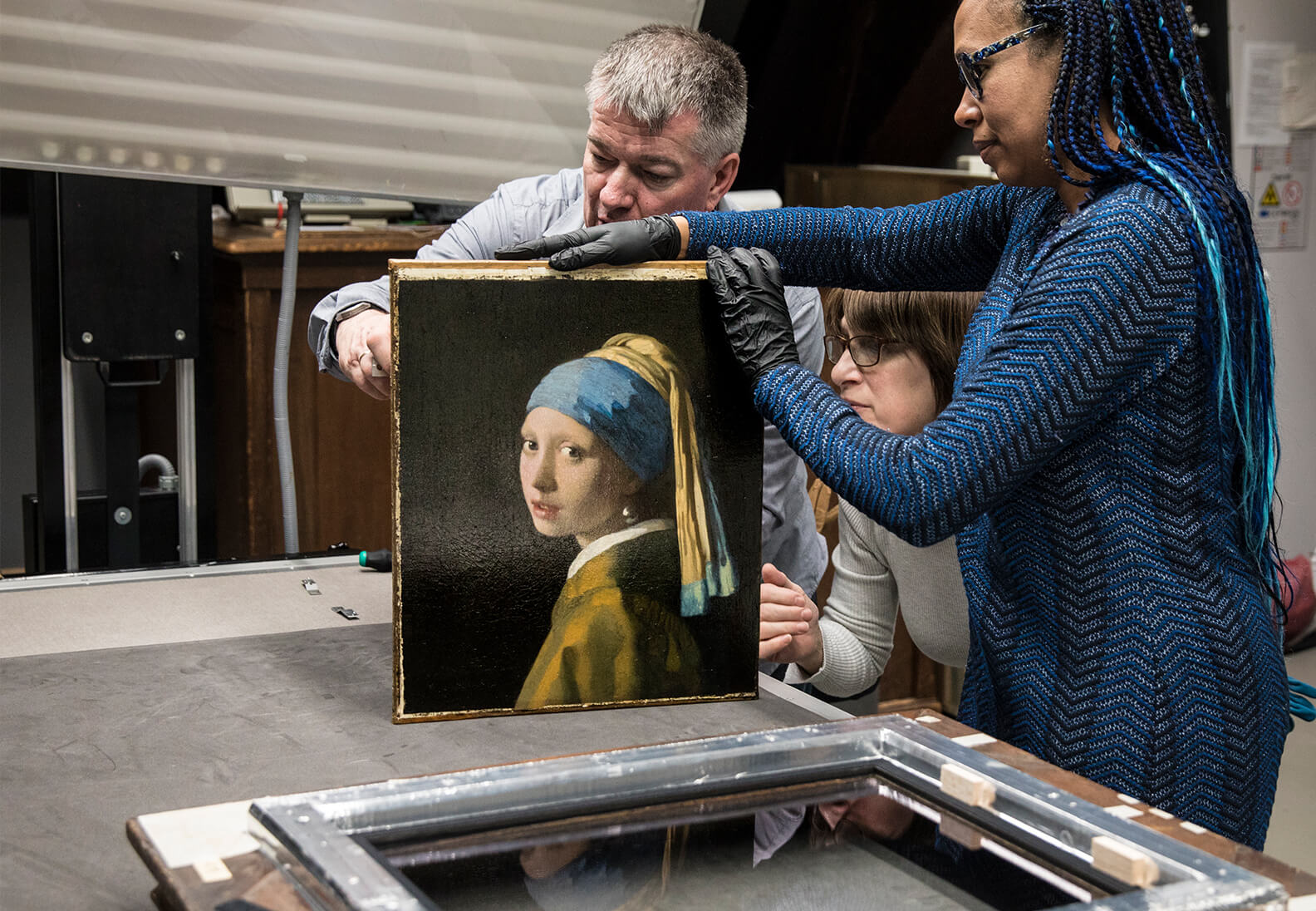 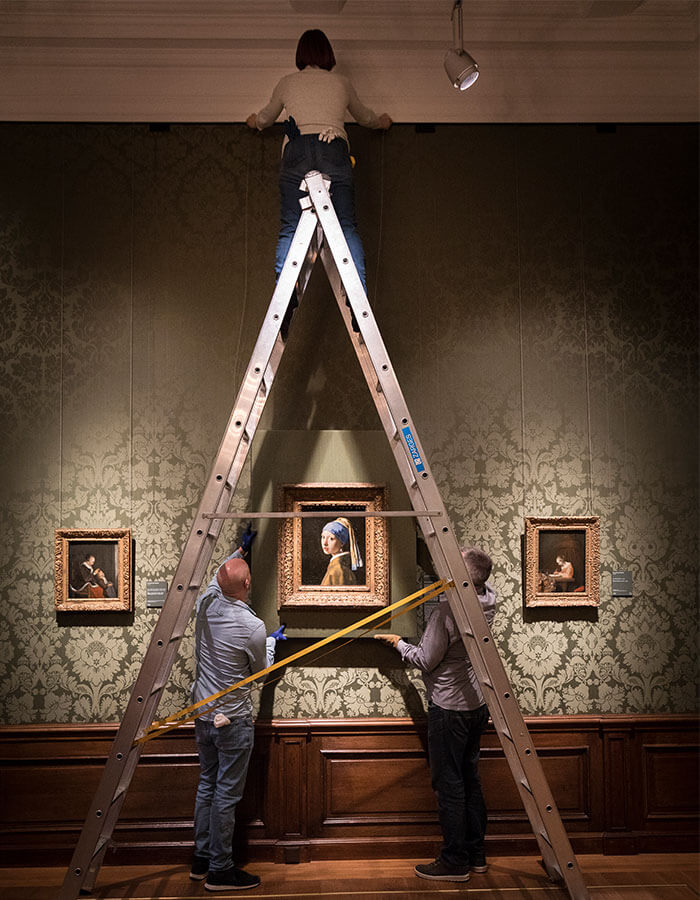 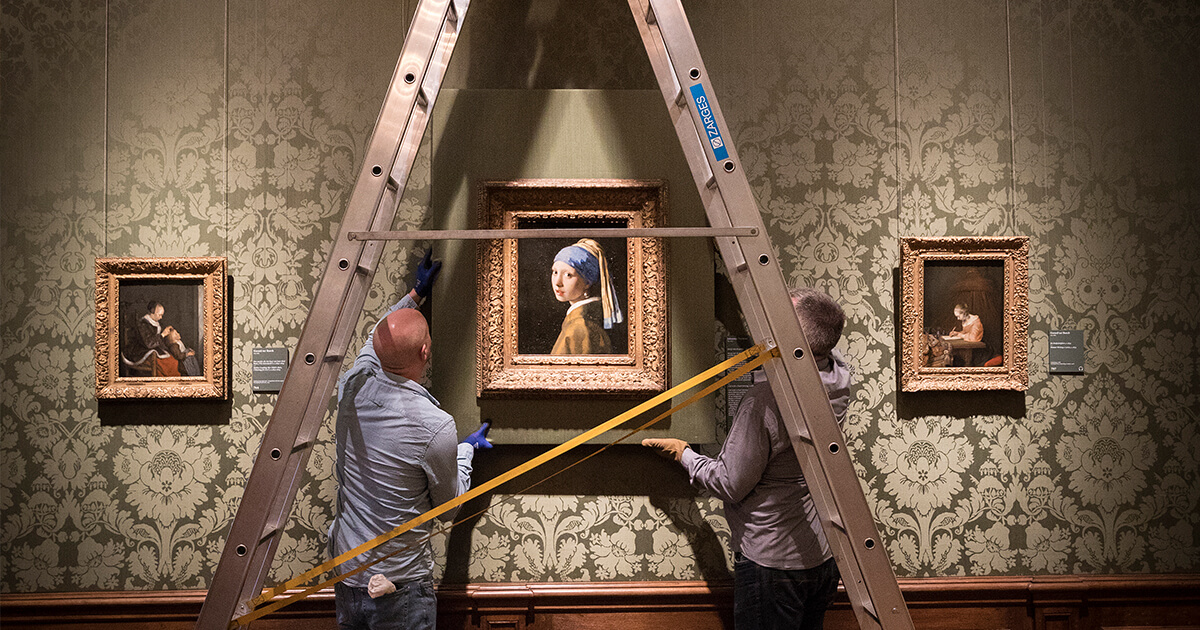