The Nine Circles of Hell – How Dante Imagined the Underworld

Rodins »Thinker« was only supposed to be a part of a massive sculpture that depicted the gate to hell. The different scenes came from Dante Alighieri’s »Divine Comedy«. In case you don’t quite remember how Dante described hell, Alexander Kords wrote a little summary for this issue of sisterMAG.

The Nine Circles of Hell – How Dante Imagined the Underworld

In almost every religion, there is the concept that after their death, human beings either go to heaven or to hell – depending on how good or bad they lead their earthly life. Of course, it’s not possible to prove if either place really exists. However, they’ve been stimulating the imagination of mankind for ages. The Italian philosopher Dante Alighieri, for example, painted a very vivid and still present image of hell in his main work »Divine Comedy«. It took Dante 13 years, from 1307 to 1320, to finish the book; countless artists from all areas – from literature and music to comics and video games – dealt with its content. The sculptor Auguste Rodin also dedicated a large part of his artistic life to the »Divine Comedy«. His famous »Thinker« was only one of 180 figures his monumental sculpture »The Gates of Hell« consisted of. But what did hell in Dante’s »Commedia« actually look like?

The protagonist of Dante’s »Divine Comedy« is Dante himself, a 35-year-old poet who deviated from the right path in life. On his way to the mountain of virtue, he wandered through a dark forest where wild animals threaten him. To his relief, he encounters the Roman poet Virgil. Dante is not confused by the fact that Virgil died more than 1,300 years ago, and it doesn’t bother him either that Virgil suggests taking a detour through hell. So, the two men head to the gates of hell that Rodin would use as inspiration for his sculpture some centuries later.

In Dante’s imagination, hell looked like a huge funnel that formed when the fallen angel Lucifer dropped to earth with a slam. On the southern hemisphere that was completely covered with water, Lucifer’s impact formed the mountain of purgatory – the place where the souls who weren’t supposed to go to heaven right away were purified. This is where the second part of the »Divine Comedy« takes place. The third and last section leads Dante to paradise. But first of all, he and Virgil have to survive hell.

The deeper, the more evil

The funnel looks like an amphitheatre consisting of ten terraces – the vestibule and the nine circles of hell. The deeper in the ground they are, the smaller are the circles and the more brutal are the punishments the »residents« have to suffer. In the vestibule, for example, the worthless people stray who are neither wanted in heaven nor in hell and who are permanently tormented by wasps and hornets. This place is separated from actual hell by the river Acheron. Since Dante is still alive, he is not allowed to cross the river. Virgil, however, persuades the ferryman Charon to take them to the other side.

The first circle of hell is Limbo – the section where all souls suffer who sinned without sins. Confusing, right? Heathens and children who died before their baptism are meant here. From the second circle, hell really starts. At the entrance, the underworldly judge Minos waits. In Dante’s imagination, he is a demon and sends every new arrival to the appropriate circle of hell. To do so, he wraps his tail around his body; the more turns, the deeper down the sinner has to go. Voluptuous souls, for example, go to the third circle, cheap ones to the fourth. From the seventh circle down, the really bad people can be found: perpetrators of violence, suicide victims, blasphemers, fraudsters, thieves and traitors. All circles are occupied by all kinds of figures from Greek and Roman mythology and from history. For example, Dante and Virgil meet Odysseus who is punished for his betrayal of Troy as well as Francesca da Rimini. She lived at the same time as Dante and was killed by her husband Giovanni Malatesta because she cheated on him with his brother Paolo.

Even Goethe was impressed

In the ninth and final circle, Dante put the traitors. They are frozen up to their necks in the lake Cocytus and have to suffer in this unfavourable position to all eternity. One scene in the last circle of hell even made a deep impression on Johann Wolfgang von Goethe. He called Dante’s description of the fate of the nobleman Ugolino della Gherardesca »the highest form of poetry«. Trapped in eternal ice, Ugolino constantly gnaws on the skull of another man: the Archbishop Ruggieri who did a horrible thing to Ugolino when both men were still alive. The churchman imprisoned the nobleman and his sons and grandsons in a tower where they starved to death. Before he died, Ugolino ate the bodies of his starved descendants to survive a little longer.

Climbing down the fur

Not far away from the creepy scenario with Ugolino and Ruggieri, Dante and Virgil eventually meet the prince of hell himself: Lucifer who has three faces and is also trapped in the ice. With every mouth, he chews on a traitor: In the left and the right mouth, there are Brutus and Cassius, the murderers of Caesar, and in the central mouth, it’s the most famous of all traitors – Judas. In order to escape hell, Dante and Virgil climb down Lucifer’s fur. Delicately enough, his genitalia are the exact centre of earth; from there, the wanderers from hell ultimately reach the foot of the mountain of purgatory and climb it in the second part of the »Divine Comedy«. 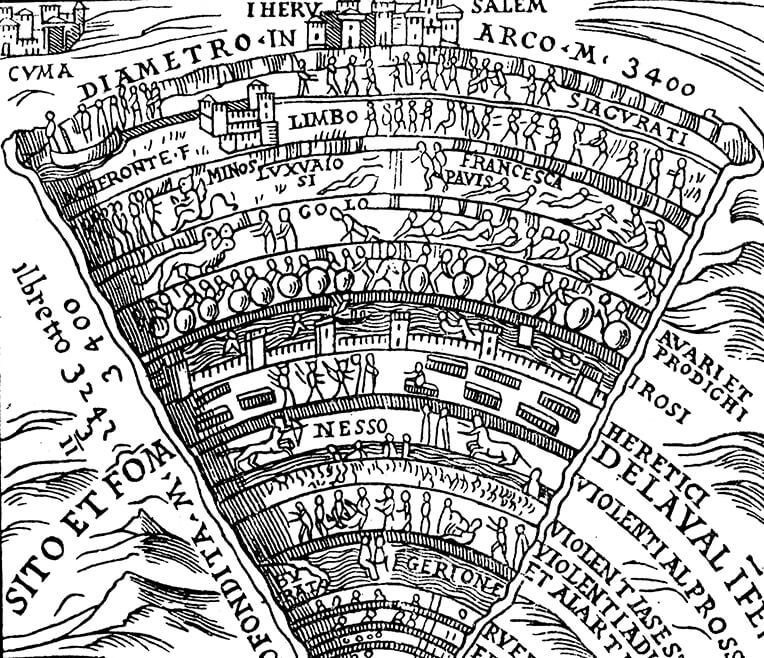 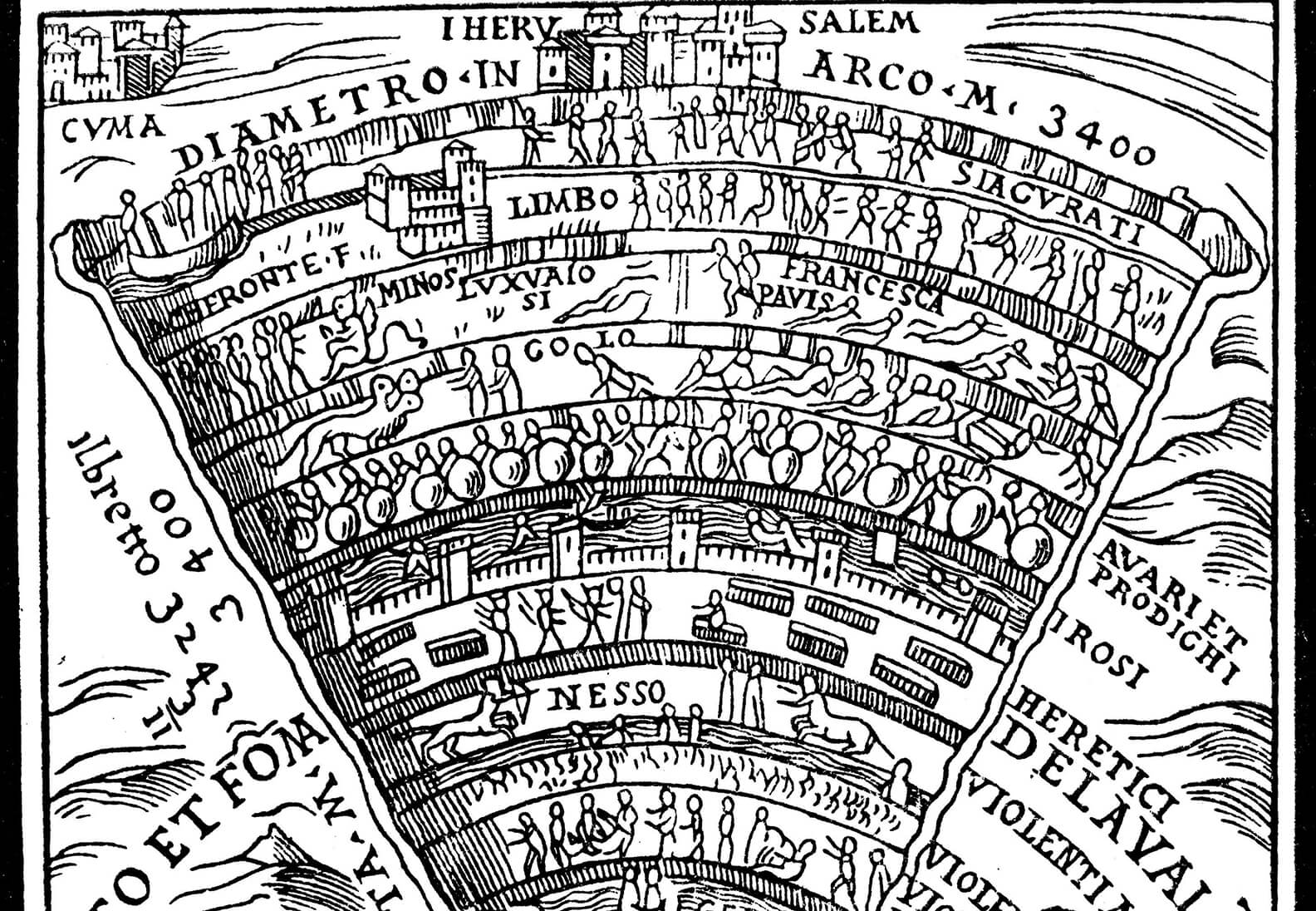 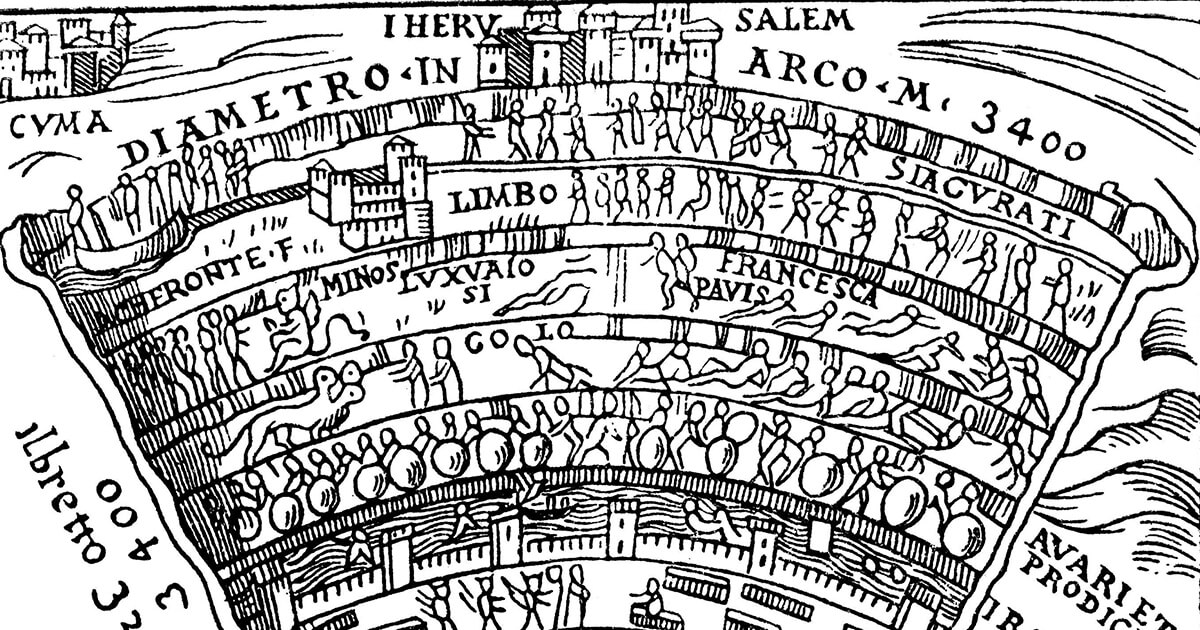