The History of Punch Needle

Los Angeles fiber artist and fashion designer Micah Clasper-Torch is a true expert on the punch needle and the various techniques of the craft. In sisterMAG No. 61 she gives you a little insight into the world and history of the punch needle. Maybe you will soon be able to pull out the punch needle yourself and conjure up your very own creations!

The History of Punch Needle

In just a few short years, punch needle has seen explosive growth in popularity, spurred almost entirely by social media.  Ask any artist or crafter where they learned about this technique, and most will tell you they saw it on their Instagram feeds, found an image through Pinterest or watched a video of the technique on YouTube. However, despite its sweeping resurgence and the increasing number of photos, videos and blog posts about the technique, one question remains largely unanswered – where did this technique come from? What is the history behind this craft? As it turns out, the answer is not so simple.

The most recognizable style of punch needle that sparked the current resurgence (thanks to Arounna Khounnoraj and Amy Oxford), Punch Needle Rug Hooking is distinguished by its use of thick yarn and larger needle to create a distinct looped textile.

In the 1830s, floor coverings and manufactured carpet were all the rage in France and were gaining popularity in cities and wealthier households within the United States. But since the price was still far out of range for most people in rural America, creative, resourceful women in these locations began to develop their own methods to create rugs for their homes.

Farming communities had plentiful access to burlap from feed sacks, so these women began to use a small metal hook with a wooden handle (similar to a crochet hook) to pull strips of fabric, including old clothing and rags, through the burlap to make dense, looped floor coverings. In the early years these designs were quite rustic, and rug hooking was often looked down upon as a craft of poverty. But over time, these women began to create small rugs for the home that were not only practical but artistic, designing their own unique patterns to suit their homes and their tastes.

Throughout the 1800s, rug hooking grew in popularity, and in 1886, a man named Ebenezer Ross from Toledo Ohio patented the first punch needle tool as an alternative to the traditional rug hook. Called »The Griffin«, this tool enabled early rug hookers to work more quickly, punching loops downwards from the back of the fabric rather than pulling yarn up through the front.

With the new ease and »speed« of the punch needle, rug making quickly gained popularity, leading to the emergence of rug making studios and a booming cottage industry up and down the Eastern Seaboard and up into Maritime Canada. In the 1920s, a selection of prominent rug hooking studios opened, including Abnake Rugs in New Hampshire, Cranberry Rug Industry in Maine, the Mills-Mosseller Studio in North Carolina, and The Ruggery in New York. The work of a talented punch needle rug hooker would last for generations, and by this time, hooked rugs from certain communities were so revered, that in 1930, a pair of rugs from Walderboro Maine fetched an auction price of $1,550 — the equivalent of almost $24,000 today!

Through the 1930s and ’40s, custom hand-punched and hooked rugs made in America became some of the most sought after additions for the home. Modernist artists began to explore this art form, translating their paintings to rugs and tapestries. The work of these artists and craftspeople graced the floors of movie stars and politicians, were displayed in prominent New England estates and were displayed at institutions like the Metropolitan Museum of Art and the Smithsonian. More than just a craft, punch needle rug hooking was a true American industry for decades that provided livelihood, a creative outlet and the ability to work from home to women and men from Appalachia up through Maine.

Sadly, by the 1950s, most American rug manufacturing was sent overseas to be imitated by the tufting gun (which is having its own resurgence these days), and many of these rug studios had to close their doors. Aside from a brief revival in the ’70s, punch needle rug hooking became a dying art, relegated to the category of »craft« and its rich history all but forgotten – until now!

In 1974, a woman named Jean Cook Anderson visited a community of Russian Old Believers based in Woodburn, Oregon (USA) and was captivated by a raised embroidery technique that she noticed on their clothing, curtains, tablecloths and cushions. The Old Believers, a Russian Orthodox group who live and dress in a traditional style that has not changed for hundreds of years, had been practicing this technique that they called Igolochkoy (meaning »with a little needle«) for generations.

Fascinated by this technique, where many little loops were clustered together to create beautifully delicate and detailed embellishments depicting flowers, animals and other designs, Jean asked one of the women to teach her. The woman showed her the process, which included using a tiny needle barely larger than one inch to push loops of fine thread through cotton and polyester fabric. The density of the tiny stitches held the loops in place without any glue or adhesive, and washing only strengthened the embroidery. Soon they began to teach other non-Old Believers, needles were manufactured under the Igolochkoy brand, and this technique gained popularity across the United States and beyond as a decorative craft and art form.

There is little known about the history of Russian miniature punch needle embroidery before it was popularized outside the Old Believer circles in the 1970s. Because of the migration of the Russian Old Believers all over the world since the 1600s, it is not known if it travelled with them from Russia; if it was invented within their community during their migration; or if they picked up the technique elsewhere during their time in Turkey or the Ukraine. Practitioners and teachers of this art form have travelled around the world, to museums in Kyiv as well as in Poland and Hungary, and none of the curators had ever heard of this technique – the only clear examples of this technique and confirmed history that exists is from the 20th century.

Bunka is practiced with a slightly different style of hollow needle, only uses one special type of rayon thread and is worked on a tightly woven polyester gabardine. The rayon thread is pulled apart and one strand is used at a time. The thread »kinks«, and these loops are what hold the fibre in the fabric. Bunka is the only punch needle technique that is practiced from the front of the fabric, and employs longer stitches that more closely resemble traditional embroidery, instead of the looped side.

Bunka emerged in Japan during the 19th century, shortly after rayon thread was invented. Rather than being used for functional items or embellishment, it was practiced purely as an art form. Finished work is framed, and looks similar to oil paintings. Bunka is truly the definition of painting with thread! Early bunka often depicted scenes of flowers, animals and landscapes, and features gorgeous shading and colours.

Bunka is said to have made its way to the United States after World War II when a soldier returned home with his Japanese bride, who brought with her a love of this art form. She began to teach others, and the craft began to spread and gain popularity in the United States, and similarly, around the world.

Unlike punch needle rug hooking and punch needle embroidery, bunka is a very delicate art form and cannot be washed or used with the same functionality as these other types of punch needle. The special thread used for this craft is part of its distinctiveness and beauty, and can be brushed and manipulated to create all sorts of textures and effects on the finished piece.

Bunka continues to be practiced around the world by small groups of enthusiasts, yet still remains largely unknown to many fibre artists and crafters.

Today, the beauty and artistry of punch needle combined with its rich history of self-sufficiency, creativity and slow craft, is resonating with a new generation.  Contemporary artisans are incorporating punch needle techniques into pillows, wall hangings, accessories and a variety of other items in bold designs and colourways that are in stark contrast to the darker colours and folk art patterns seen in many of the traditional applications. Creatives all over the world are experimenting with the possibilities for punch needle, as a hobby, as a business or as fine art.

Understanding the history and differences between these traditional crafts sheds new light on contemporary punch needle. It illuminates the ways in which we celebrate traditional technique or innovate with our work, and it enables us to uplift the history of this unique art form, while simultaneously pushing the boundaries of its application through contemporary design.

Read more about the history of the carpet here. 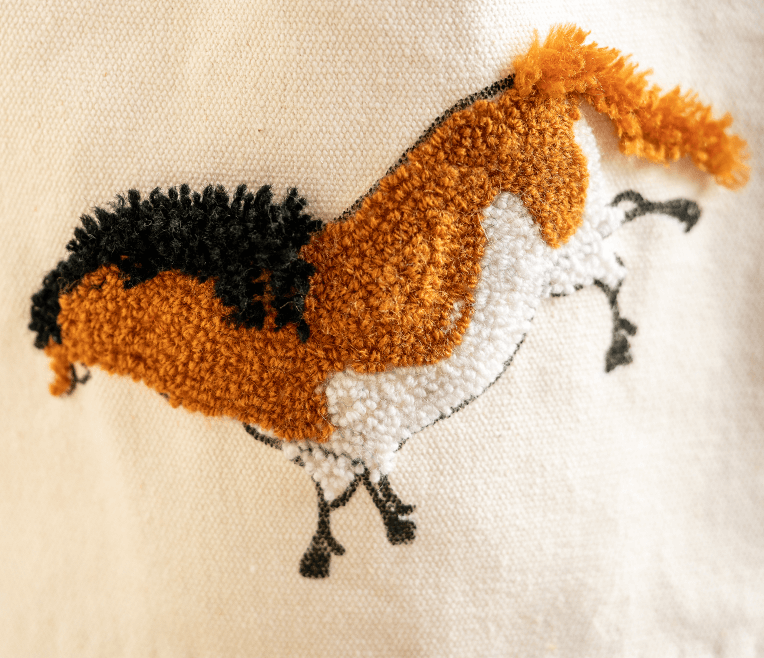 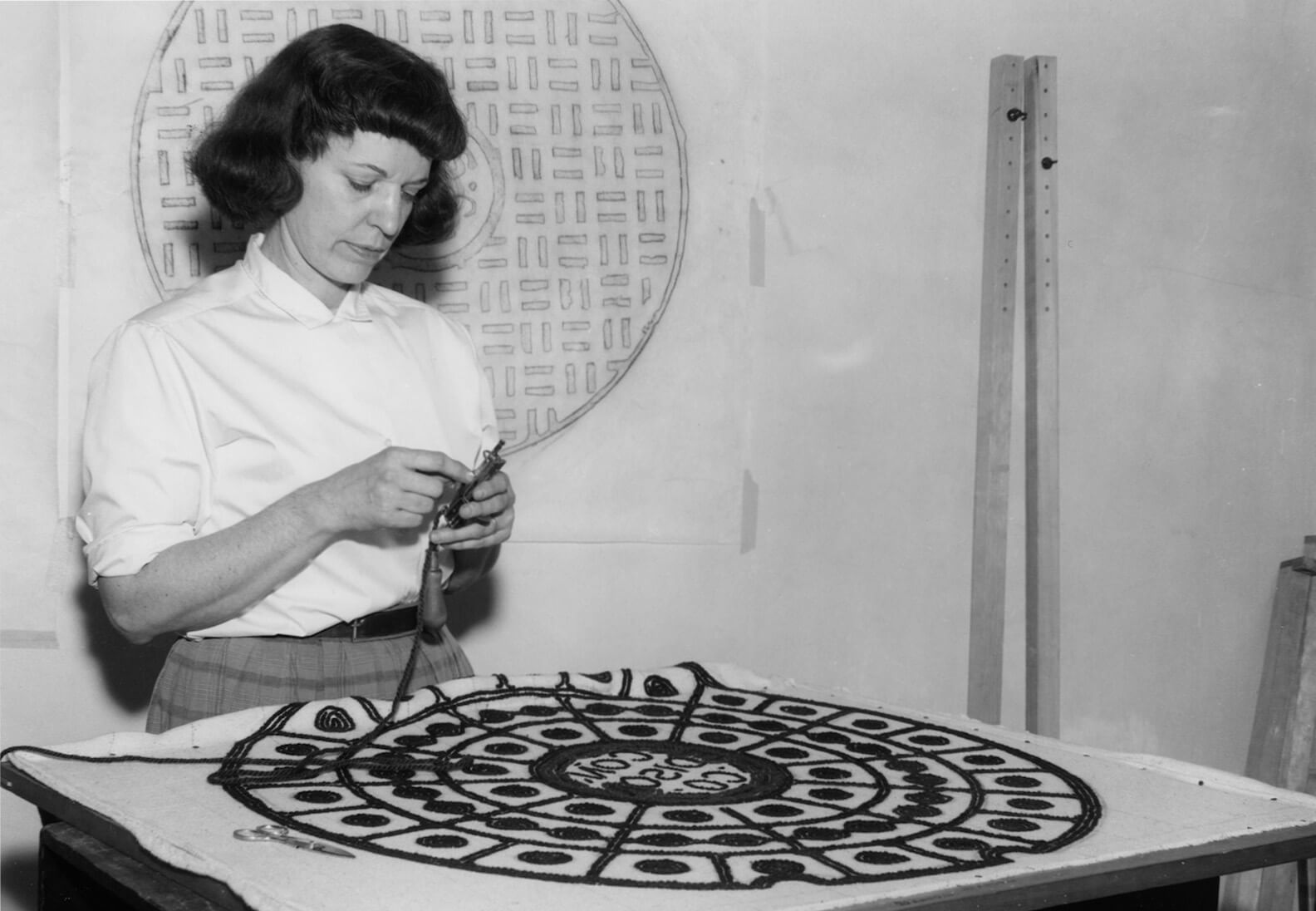 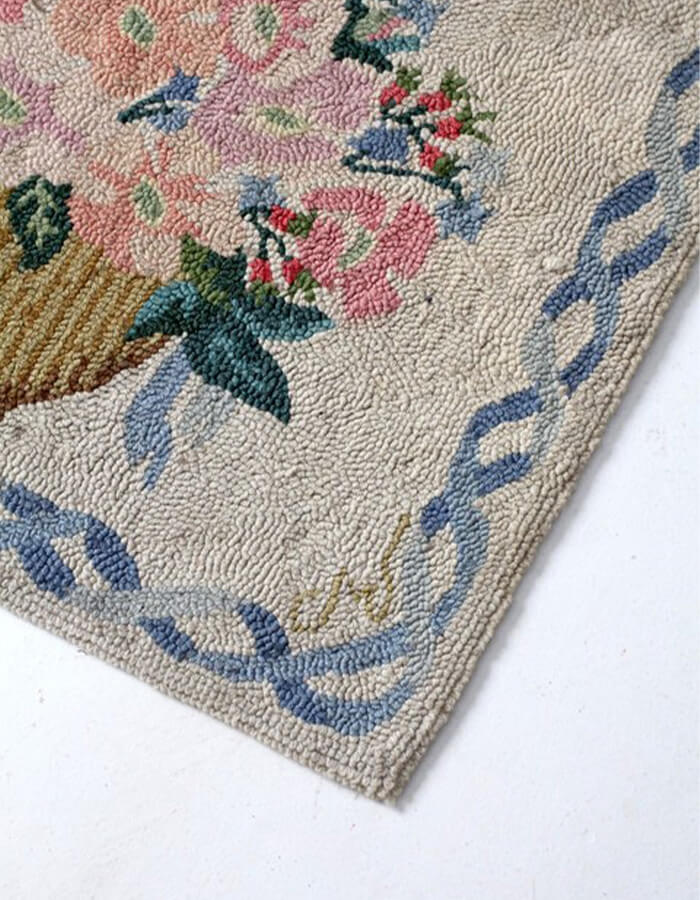 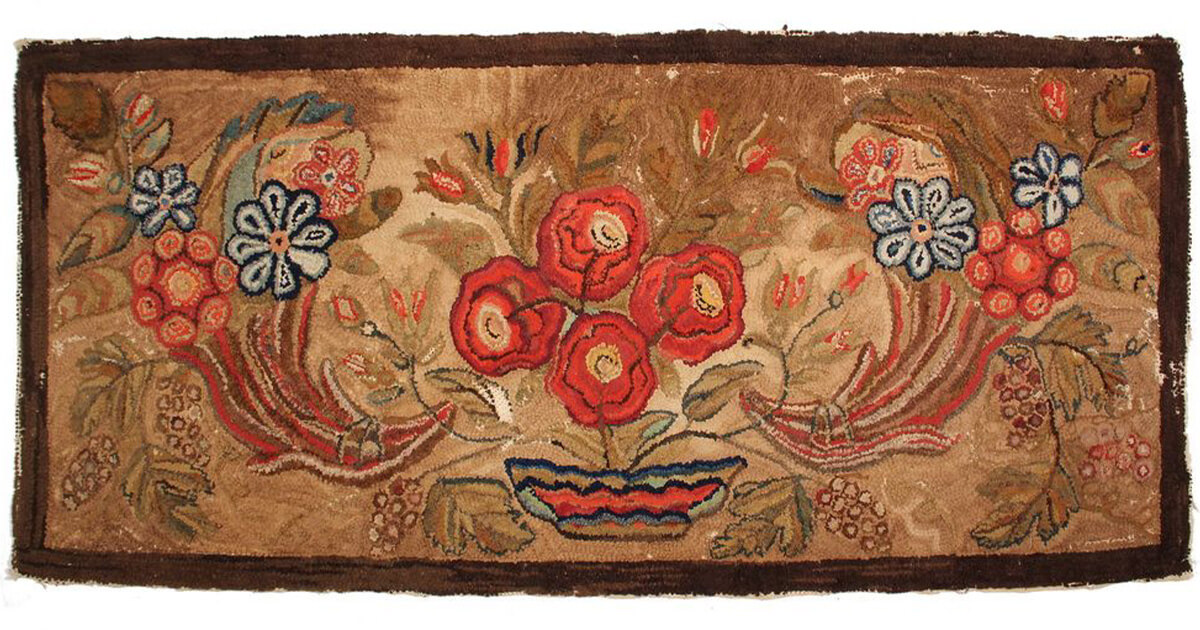