A little history of women’s trousers

In sisterMAG No. 57, author Barbara Eichhammer takes you on a short time journey and explains how trousers actually came to women … Well, do you have any idea?!

A little history of women’s trousers

»I make fashion women can live in, breathe in, feel comfortable in and look younger in.« Coco Chanel

Although women’s trousers are nowadays widely taken for granted, the female »right to pants« is rather new. International luxury hotels, for instance, still had bans on women wearing trousers during the 1970s. Harrods in London even prohibited female customers in trousers from entering its store until 1970. The history of women’s pants is therefore also a history of emancipation. Our little overview shows you how trousers came to women in a century-long struggle.

Starting with the Middle Ages, pants became an integral part of the knight’s war dress. Since the 14th century trousers were reserved as clothing for men. In a nutshell: Pants were generally off-limits for women; in some places, such a ban was even passed as law. Trousers gradually turned into the ideological sign for strength, combat power and masculinity in a patriarchal society. In fact, the notion of women wearing fabric between their legs was seen as scandalous until the 20th century. Despite this patriarchal trousers ban, some bold women have dared to wear pants in public over the centuries. Whether to do sports, to travel or to rebel against gender conventions. Just like the sans culottes, who turned to their »pantalons« during the French Revolution in 1789. Hence, Paris established a law, which only allowed women’s pants, if urban authorities approved of it. Woman novelist George Sand loved to break this law during the 19th century. Curiously, the law was only suspended from the French constitution in 2013.

From the middle of the 19th century onwards the women’s rights movement has been closely interlinked with the women’s trousers movement. The cry for women’s pants grew gradually stronger; one example being US-American women’s rights activist Amelia Bloomer. The editor of the feminist magazine The Lily caused a sensation, when she publicly advocated reform dress. In 1851, she printed instructions in her magazine on how to make ankle-length pants for women, which were subsequently called bloomers. The trousers allowed for greater freedom—both metaphorical and physical—within the public sphere. The general female public, however, reacted quite hesitantly to this new fashion style. Despite some women wearing bloomers to official occasions in the north-east of the US, the big majority did not dare to go out in a bloomers costume in Europe. For a long time, the bloomers were deemed to be too radical.

It was only from the 1910s onwards, that the struggle for women’s trousers gained new impetus. Inspired by the contemporary trend of Orientalism, Paris designer Paul Poiret created a floor-length culotte costume. It resembled Turkish trousers, which were held together just above the ankles. A great resistance formed itself against these so-called »harem pants«. When Poiret visited a public horserace with models in his trousers, he had to defend his mannequins with a stick against the angry mob. The reason: At the time, women in trousers were only known from pornographic illustrations. The representation of legs and crotch were considered to be deeply indecent. In Berlin, it even came to traffic jams when a lady in trousers was walking along the street.

The First World War finally set an end to the strict trousers ban for women, when many females had to take up gainful work. They were equipped with work clothing that had originally belonged to formerly employed men. Female factory workers, for instance, started wearing overalls; women in public services used a uniform with long trousers in winter. That women had to wear male clothes was, however, not seen as a transgression of gender boundaries. It was rather regarded as a convenient, transitory phenomenon during wartime. As it happens: As soon as the war was over, patriarchal fashion rules returned.

After the First World War, Coco Chanel pioneered women’s pants. In the 1920s, the French fashion designer created trousers for herself, helping her climb into the rocking gondolas in Venice. The forerunner of her legendary yachting pants was born; wide trousers for all leisure activities, which also displayed a certain elegance. During a trip to the French coast, Coco Chanel was inspired by men’s clothing for her designs. She used the straight, wide cuts of sailor’s trousers for her yachting pants and introduced accessories like ties for women. Chanel succeeded in what many designers have failed before: To liberate the broad masses of women from strict patriarchal fashion rules. She declared war on the corset as well as on volants, lace and frills. One of the first designers who dared to use cotton jersey as material for her clothes, a fabric that had been used before only for men’s underwear. The soft and elastic material was ideal for her comfortable, flowing patterns, and it was available after the war at a favourable price. Thus, Chanel did not only revolutionise the fashion industry but also broke with persisting gender conventions. Emancipation through fashion was her motto. With her black, short bob, the cigarette holder and her jersey trousers, she turned the androgynous garçonne style in Paris into a fashion trend of the Roaring Twenties. The term garçonne (French for boyish woman) refers to Victor Margueritte’s novel La Garçonne (1922). The book created a scandal because the female protagonist featured in men’s clothes, wanted to make a career and chose her love life in a self-determined way.

Until women’s pants were fully accepted by society some more decades had to pass. Yves Saint Laurent wrote fashion history when designing his »Le Smoking«. In 1966, he created the first trouser suit for women in the style of a men’s tuxedo. Catherine Deneuve was his first customer in 1967. Famous actresses and starlets like Liza Minelli, Lauren Bacall and Bianca Jagger followed. The latter chose a white version of the pantsuit for her wedding with rock star Mick Jagger. What is more, Le Smoking also revolutionised modern work clothing. Yves Saint Laurent’s creation paved the way for office-friendly women’s pantsuits worldwide. Its far-reaching influence on gender images and break with patriarchal fashion orders was also reflected by fashion photography. For the French Vogue, Helmut Newton presented the ladies’ tuxedo in clean black-and-white images – with androgynous models and slicked back hair.

During the 1980s Karl Lagerfeld turned women’s trousers into the new It Piece. He brought new glamour to the outdated Parisian fashion house, Chanel, by reinterpreting old Chanel classics like a postmodern pastiche in a chic-sexy way. In 1984, Lagerfeld designed the first Chanel Jeans in his first Prêt-à-Porter collection. Moreover, he modernised the classical Chanel costume by creating motorbike clothes, including a stylish helmet. Chanel was the first Haute Couture house worldwide, which consciously incorporated street wear elements into its high fashion. Chanel gave young women a modern, unconventional trousers look, which corresponded to the zeitgeist and modern-day struggle for gender equality. Lagerfeld dressed his muses like Claudia Schiffer, Kate Moss or Kristen Stewart in masculine-sexy outfits, which popularised a contemporary gender mix. In 1997, Kate Moss appeared on the catwalk in a super-sexy brown tweed pantsuit, a bold reinterpretation of the classical Chanel tweed costume. Lagerfeld likewise brought the legendary garçonne look back to the popular culture of the 21st century. Hollywood actress Diane Kruger was photographed by him in a photo shoot called »Dandy Diane« for the German Vogue, showing Kruger quite androgynously with Glencheck suit, hat, tie and men’s shirt. Lagerfeld even made casual trousers high fashion material. In 2014, he presented the first Chanel jogging trousers together with Cara Delevingne on the catwalk. The fashion history of female trousers is thus also a feminist history of emancipation. Looking for the traces of women’s pants also shows how gender roles were practiced and defined at specific points of time. Fashion is a cultural practice, which does not only reflect societal circumstances but also generates and reinforces them. 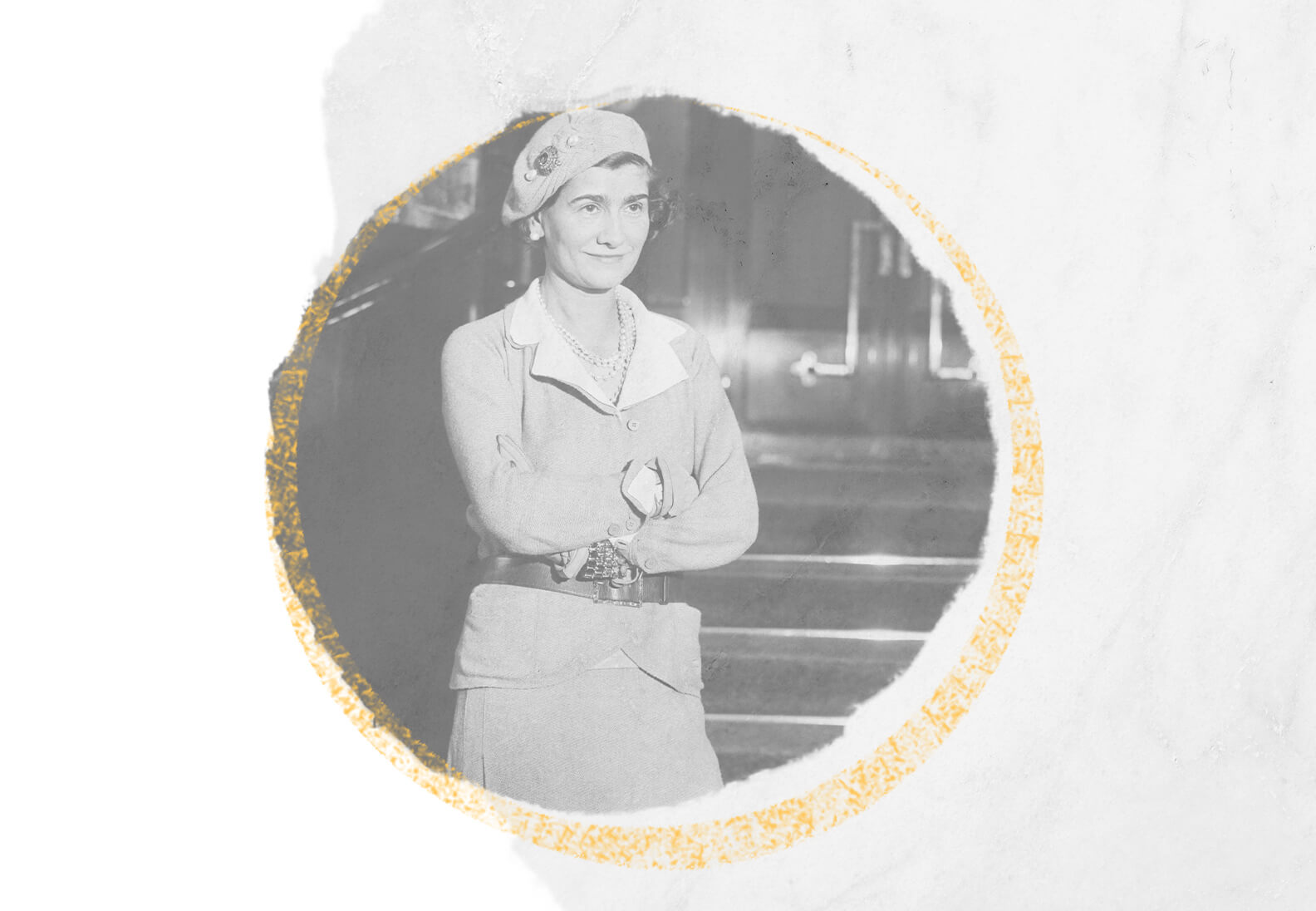 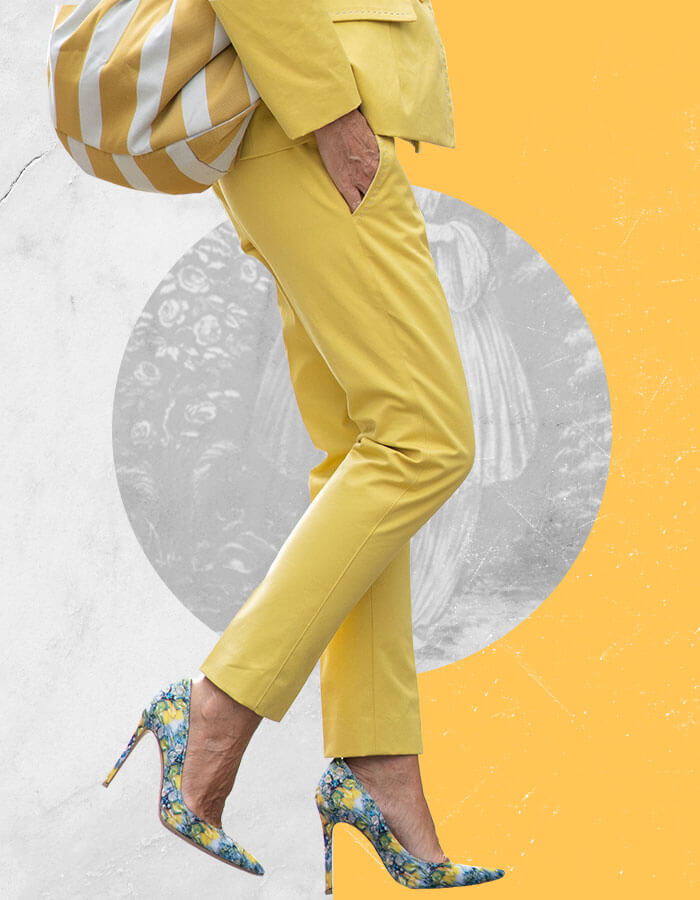 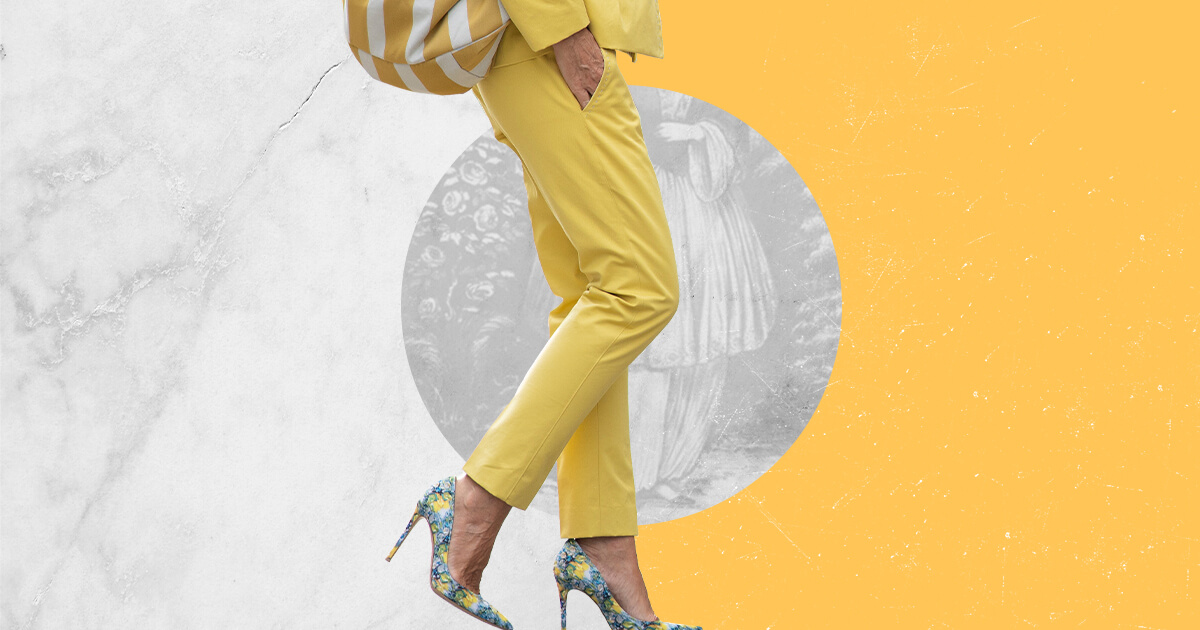