Borsalino hat pulled down to his forehead, hands in his trench coat, cigarette in his mouth: No other image summarises »Humphrey Bogart« so perfectly. During the golden era of Hollywood, Humphrey »Bogie« Bogart turned into the biggest male star of classical Hollywood cinema. He is one of the most significant style icons, influencing men’s fashion with his understatement in a fundamental way. In this sisterMAG overview, author Barbara Eichhammer shows you how he turned into the male fashion icon.

Borsalino hat pulled down to his forehead, hands in his trench coat, cigarette in his mouth: No other image summarises »Humphrey Bogart« so perfectly. As a hard-boiled loner he hunted criminals in the urban jungle, spoke one of the most legendary sentences in film history, and represented a vulnerable post-war masculinity. During the golden era of Hollywood, Humphrey »Bogie« Bogart turned into the biggest male star of classical Hollywood cinema. He is one of the most significant style icons, influencing men’s fashion with his understatement in a fundamental way. In our overview, we show you how he turned into the male fashion icon.

Born in New York City in 1899, a young Humphrey Bogart moved from the East Coast to Hollywood. His fashion style was defined on screen by his understated looks, which suggested a quiet authority. Bogart became well-known with his starring role as a film noir detective. While his earlier films mostly showed him as dubious gangster, his role as private detective Sam Spade in The Maltese Falcon (1941) made him into a Hollywood star. In a trench coat and fedora hat, Bogart embodied the epitome of the hard-boiled private detective, who came to influence the look of film characters such as Columbo and Inspector Clouseau. In American popular culture, the character of the ambiguous film noir detective can be read as a modern, urban version of the cowboy: A loner and violent outlaw amidst the urban jungle of crime; a sleuth who blurs the boundaries between good and evil while he tries to interpret a morally ambiguous cityscape. Typical film noir aesthetics like low-key lighting, tilted camera perspectives, and stark light-dark contrasts underline the mysterious aura of the anti-hero even more. In The Maltese Falcon, Bogart’s look thus became his international trademark.

His outfit also appeared one year later in his biggest box-office hit, Casablanca (1942). For the first time, Bogart starred in a romantic movie. Together with Ingrid Bergman, he turned into an international star practically overnight. Casablanca became a cult movie. »Here’s looking at you, kid« – with these famous words, Bogart said goodbye to Ilsa (Ingrid Bergman) in the legendary airport scene. Casablanca won the Oscar in 1943 for »Best Movie« and Bogart received his first Oscar nomination. Most memorable was his iconic movie outfit: Loner Rick Blaine is presented on screen with a classic Burberry trench coat, a fedora hat by the Italian brand Borsalino, and a white smoking jacket. His clothes draped so mysteriously on his rather small figure (he was only 1,67m tall), especially in the foggy final scene of the film, that this look became the standard costume for brooding characters in later films (https://www.youtube.com/watch?v=cZLBsWd3X5c). His style also significantly reflected an American masculinity typical of the wartime and post-war years. His antiheroes represented an unstable masculinity that was permanently in crisis; Bogart’s characters were lonely, cynical, and morally ambiguous. They showed the disillusionment of post-war veterans, who felt displaced, alienated, and lost after their return from the war. His shadowed face, hat pulled down to his forehead, and rain-soaked trench coat emerged as symbols of a forlorn post-war society.

With his typical Borsalino hat, Humphrey Bogart developed into an unforgettable style icon after Casablanca. His casual, uncomplicated look was deliberately promoted by his film studio; Warner Bros. Studios carefully curated each official portrait of Humphrey Bogart, choosing ones that reflected the brooding, suave appearance of his film characters. For the audience, Humphrey Bogart became synonymous with his film noir roles. This also shows the complexity of the star image: In his pioneering study Stars (1979), film scholar Richard Dyer defined stars from a semiotic perspective as a differentiated sign system. As public artistic figure, the star is constantly produced by its surrounding discourses. The image is not only formed by film roles, but all paratexts and subsidiary media such as radio, magazines, TV or even paparazzi pictures. In this regard, Bogart’s private life and wedding with co-star Lauren Bacall contributed to his status as a style icon. In 1944, he fell in love with his fellow co-star while shooting the movie To Have and Have Not. Bacall was 25 years his junior and a fashion icon in her own right. Together, they were considered Hollywood royalty: In Howard Hawks’ movie The Big Sleep (1946), the newly-weds appeared on screen together again. Bogart played the pessimistic private detective Philipp Marlowe, complete with fedora and trench coat, thereby cementing his signature look. Humphrey Bogart’s legacy can be observed many years after his death: In 1999, the American Film Institute named him the greatest male film star of all time. 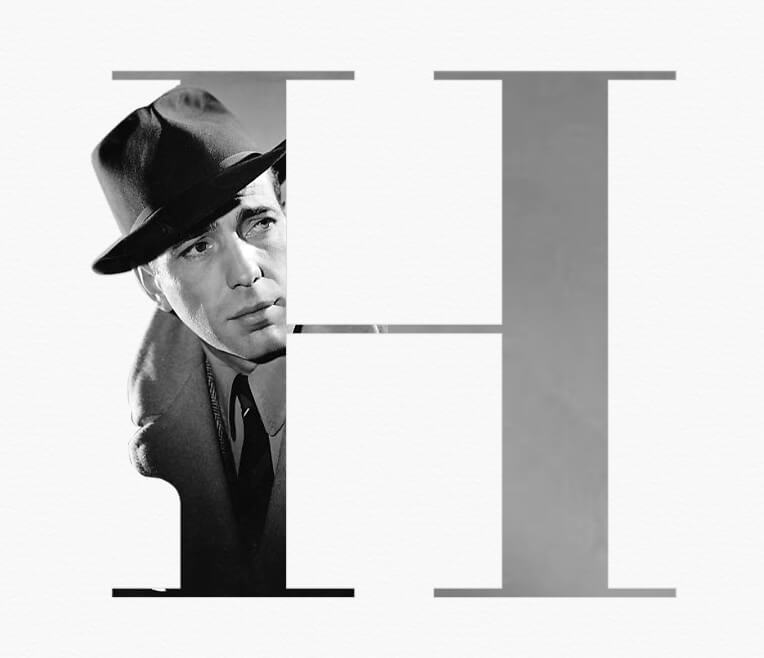 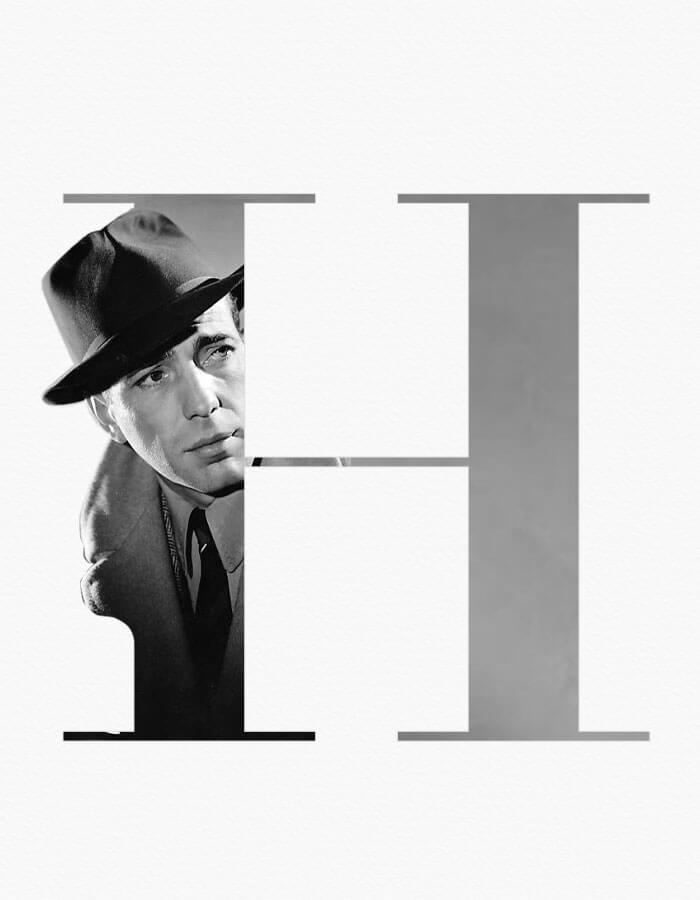 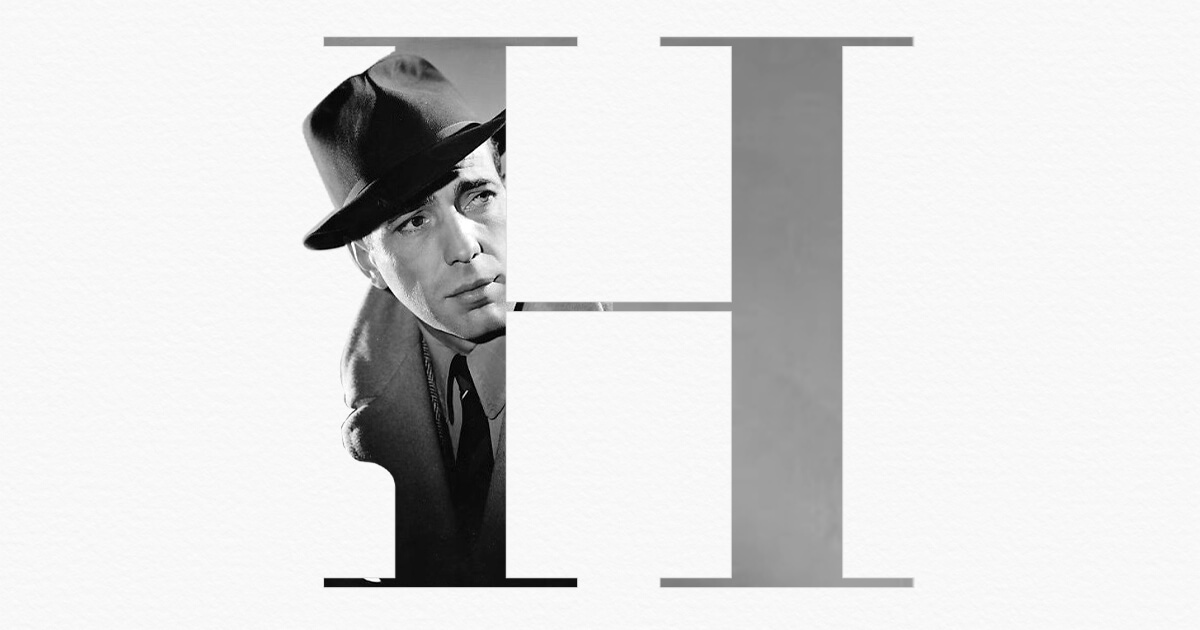