In an interview with the Tretyakov Gallery in Moscow, conducted by sisterMAG team member Caro, you can learn more about Russian art, the avant-garde movement, and especially about our cover art »The Perfume Store« by Olga Rozanova. What confusions we had with the exact title of the artwork and much more you can find out here in sisterMAG.

Masterpieces of Russian art from 11th to 20th century

In our art year, we regularly present not only the artwork itself but also the institutions that house it in their collections. There is definitely another important period in art history missing, the »russian avant-garde« which is classified between 1905 and 1934. Moscow and St. Petersberg became important places for artists and brought forth great names. The Tretyakov Gallery in Moscow is in possession of numerous important masterpieces of this time and also our title painting by Olga Vladimirovna Rozanova (1886 – 1918) is located there. In an interview, we want to get to know her and her art a little better.

Who was the artist Olga Vladimirovna Rozanova, which kind of style did she pursue and what is the scope of her work?

OLGA ROZANOVA (1886- 1918) is one of the brightest characters of the RUSSIAN AVANT-GARDE. Her associates — Malevich, Stepanova, Mayakovsky, Kruchyonykh — admired her talent. RODCHENKO called her »INGENIOUS MASTER« and Malevitch himself was jealous of her perception of color. Even though Rozanova died young at the age of 32, her artistic style went through many transformations. She experimented a lot with new styles before finding her own. Rozanova’s EARLY REALISTIC WORKS (plein air and still life pictures, portraits) were influenced by FAUVISM and FUTURISM and then evolved into ABSTRACT ART. Being a complete individualist in her art, Rozanova, just like many other avant-garde painters, did not limit herself to any particular artistic manner. She thought that artist’s signature styles boost the commercialization of art, while an avant-garde painter, on the contrary, should always welcome changes and seek new ways of expression. In this regard, Olga Rozanova was a true role model for her associates. After her DEATH in AUTUMN 1918, a POSTHUMOUS EXHIBITION of her works was held. This was the very first exhibition supported by the government after the Russian Revolution of 1917. Rozanova’s heritage is diverse. Alongside with painting, she handcrafted ILLUSTRATIONS for futuristic literature, composed »TRANSRATIONAL« VERSES (»transration« or »zaum« is an experimental poetic language made up the Russian futurists), wrote manifestos and articles. She created her GEOMETRIC COLLAGES at the same time as Malevich worked on his suprematist compositions, her tsvetopis’ paintings pre-empted the Abstract Expressionism of Mark Rothko by several decades. Rozanova was also keen on DECORATIVE and APPLIED ARTS — she designed fabric patterns, clothes, purses and fans.

During our research there were always a few ambiguities as there are apparently many titles for Rozanova’s work: »Barber Shop«, »Hairdresser«, »The Barbershop«, »The Barber’s Shop«… Can you enlighten us? Which is the right and intended by the artist?

The picture’s title »The Hairdressing Salon« is not authentic. It was given by one of its owners — Nikolai Khardzhiev or George Costakis. It was never found in Rozanova’s exhibition archive. Therefore, in the catalogue of the Exhibition for Russian contemporary art the work is called »THE PERFUME STORE«. The objects depicted on the painting (a comb, a hair brush, lash extensions or a mascara advertisement, a stocking) most probably refer to a store’s product range than to a salon’s sign. In literature the picture usually has TWO TITLES »The Perfume store» (»The Hairdressing salon«). The picture’s title was OFFICIALLY CHANGED TO »THE PERFUME STORE« during the Tretyakov gallery Attribution Council meeting in 2019.

Can you comment on the history of the title artwork (1915) which is part of your collection?

We don’t know much about Rozanova’s working process. Most of her paintings were specially made for the exhibitions to which she was invited as a participant. In 1915, Rozanova created a few paintings (»The Rhythmometer«, »The Kerosene stove«, »The Work desk«, »The Sewing box« and »The Dish cabinet«) similar to the one that we’re reviewing. All these works are similar in style, they simultaneously combine ABSTRACT FORMS and thoroughly painted REAL LIFE OBJECTS. The critics pointed out the originality of this technique. They opposed the artist’s »tender« and »caring« way of depicting an object to the cubist edges and the futuristic transformations of things.

When and how did the Rozanova painting come into the possession of the Tretyakov Gallery?

After Rozanova’s death, all her paintings were abandoned at her studio. Mostly because her and the works of her contemporaries didn’t have commercial success. Later Rozanova’s works from her personal exhibition in 1919 were sent to the STATE MUSEUMS in different cities. However, »The Perfume store« was not on display that year, the work was later found in a private collection. We do not know how exactly the painting ended up in the NIKOLAI KHARDZHIEV collection (Nikolai Khardzhiev was a Russian writer, literary and art collector. He possessed an extensive archive and collection of Russian Avant-garde art and literature.). But we can assume that the work was passed on to the collector by Aleksei Kruchyonykh, Nikolai Khardzhiev and Olga Rozanova’s close friend. Creating his unique art collection, GEORGE COSTAKIS, another outstanding collector of Russian Avant-garde, consulted Khardzhiev and bought some paintings from him. When Costakis was leaving the USSR in 1977, he donated the biggest and the most valuable part of his collection to the Tretyakov Gallery, including Rozanova’s »The Perfume store«. Today it is a part of the permanent exhibition at the NEW TRETYAKOV GALLERY.

What are characteristics during the time of the »Russian avant-garde«?

It is impossible to describe the Russian Avant-garde in one or several words, because it was shaped by so many outstanding, bright and unique artists. But one thing we can underline for sure is the way those artists interpreted European (mainly French) artistic practice. Rozanova’s work is a daring ANSWER TO THE FRENCH CUBISTS. She was clearly familiar with early 1910s PICASSO and BRAQUE’s compositions where COLLAGES and COMPLEX PATTERNS of faceted forms were painted side by side on a white plain of a canvas. Following the same formula, Rozanova brings naïve elements typical for the FOLK ART into her painting.

The Tretyakov Gallery is the foremost depository of Russian fine art in the world. It was founded in 1856 by a Russian merchant, patron of art, collector, and philanthropist PAVEL TRETYAKOV. The Gallery’s collection includes icons, sculpture, graphics, applied art and the most significant works of the Russian artists of the nineteenth century. The gem of the NEW TRETYAKOV GALLERY COLLECTION (Krymsky Val street, Moscow) are the avant-garde works, among which you can find the acknowledged masterpieces of the genre — MALEVICH‘s »Black Square« (1915), »Composition VII« by W. KANDINSKY (1913), works by V. Tatlin, M. Larionov, N. Goncharova, L. Popova, A. Exter. A. Rodchenko and other. 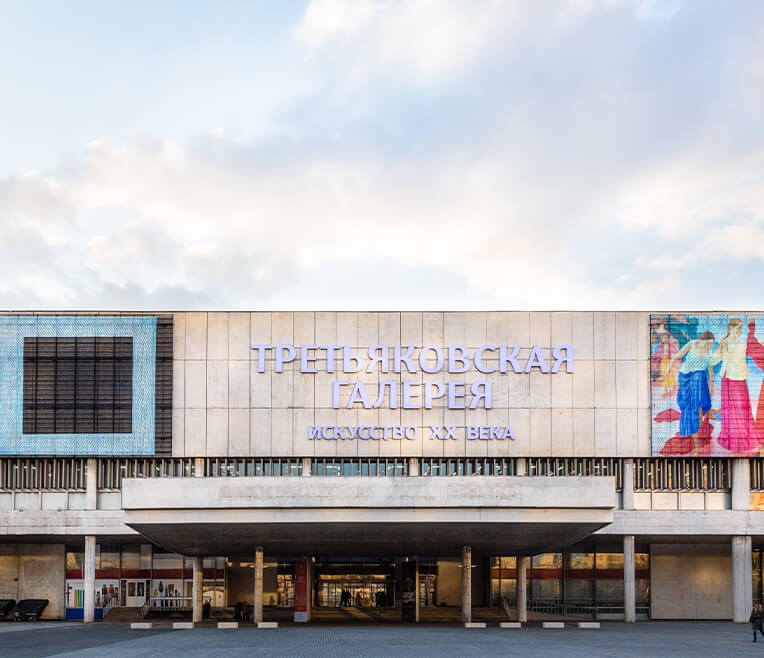 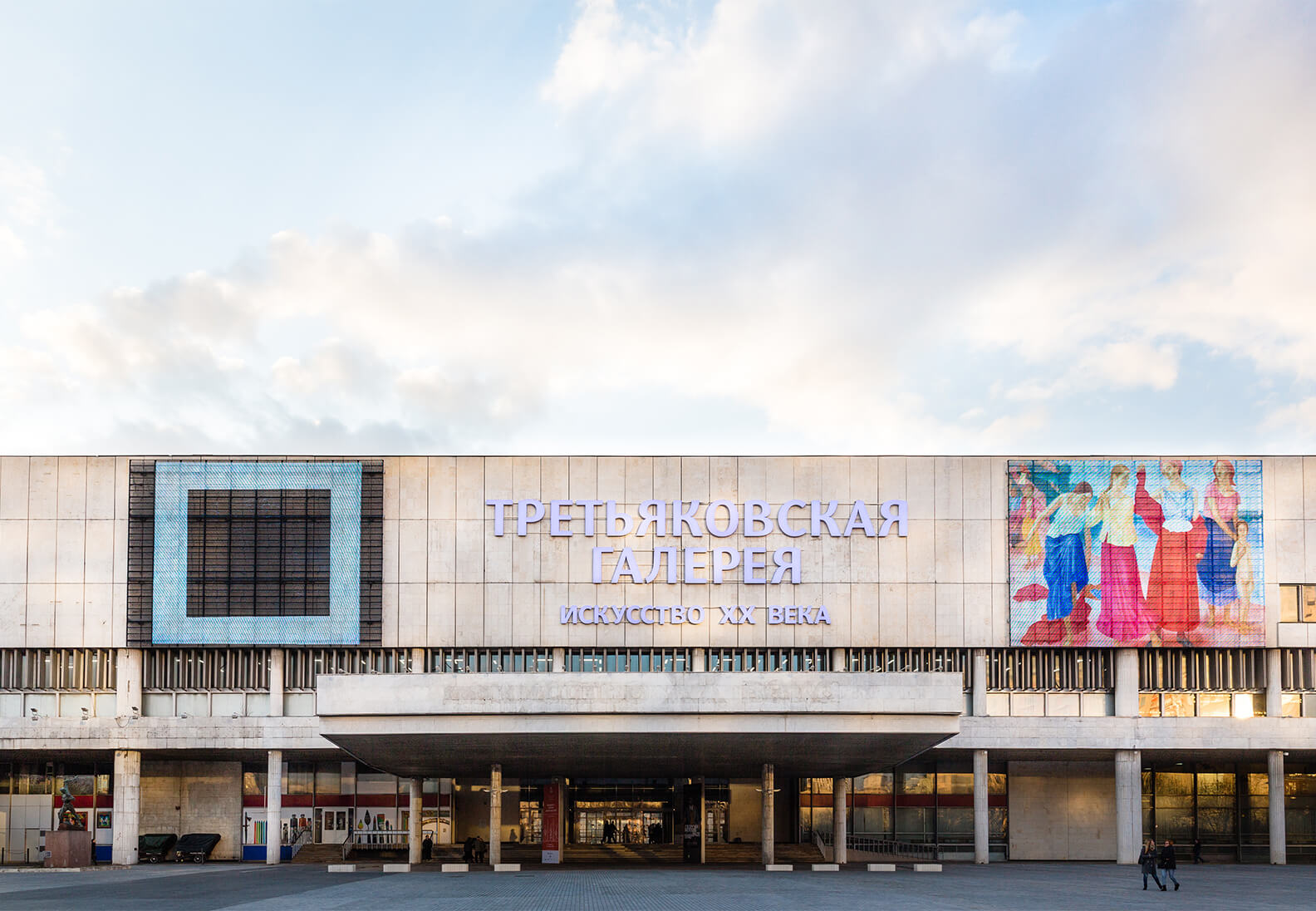 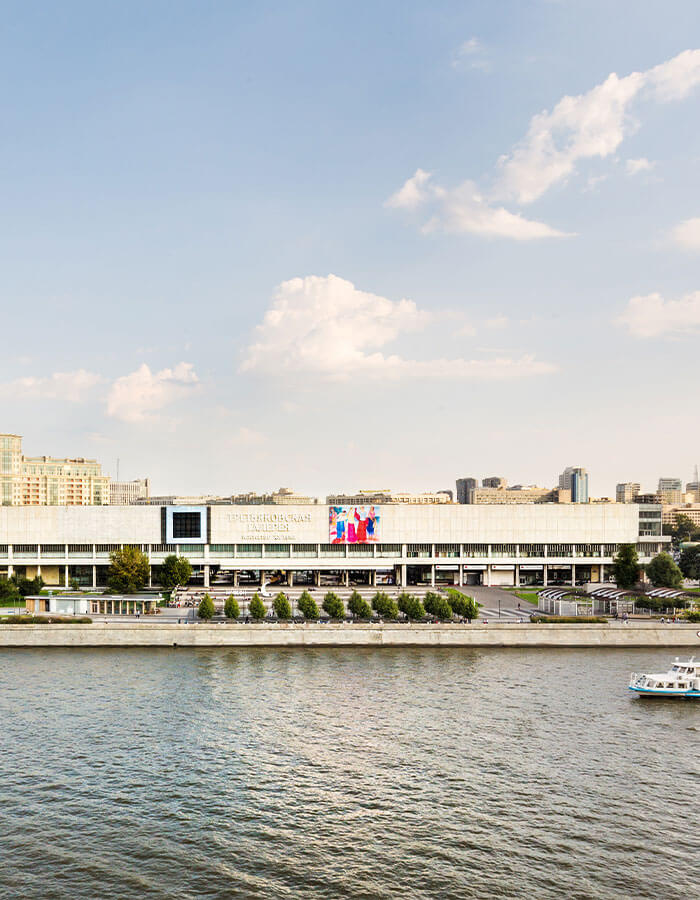 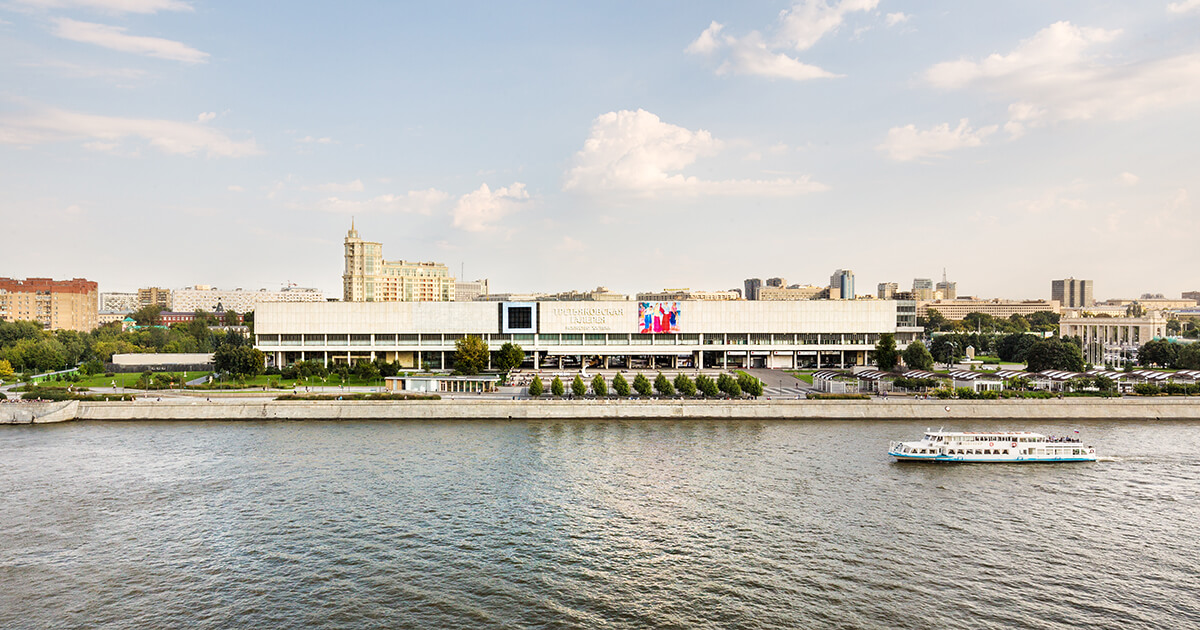