Weimar – the birthplace of the Bauhaus. Author Robert Eberhardt takes you on a city walk through Weimar and shows you the most beautiful sights of Bauhaus in Weimar in the sisterMAG 52. Museums, monuments and special buildings keeps the city ready for you.

Despite its small size, Weimar, the royal seat of Thuringia, became THE German »court of the muses«  in the 18th century, attracting writers, scholars, artists and musicians. This, in turn, influenced future generations so that countless cultural celebrities, including Franz Liszt, Friedrich Nietzsche and designer Henry van de Velde, made Weimar their home. The Grand Ducal School of Fine Arts, founded by van de Velde in 1907, was responsible for Weimar emerging as the Bauhaus State in 1919 — a movement which revolutionised architecture and design and continues to have global aesthetic effects to this day. No Ikea design, Manhattan skyscraper or metropolitan loft would be complete without the Bauhaus design language. Although Bauhaus was forced to move to Dessau as early as 1925, the foundation for this modern design and construction revolution was already set in stone during the early years in Weimar.

You can discover the Bauhaus phenomenon in many areas of this picturesque city.

10 tips for a trip to Weimar during the Bauhaus 100-year anniversary.

Not far from the railway station, the Bauhaus pilgrim will find the brand new Bauhaus Museum, which could almost be mistaken for Mecca’s Kaaba — large concrete cube in which paintings, furniture, glass, textiles and various other Bauhaus items are exhibited, along with the movement’s history and its members. After years of deliberation, disappointed visitors might have wished for an airier museum in the style and tradition of the Bauhaus architecture, and not a bunker-like box. But through its almost windowless facade, you are immersed in a Bauhaus world far away from the outside reality, a world completely in the thinking and design of the 1920s. You are quickly aware that the birth of Bauhaus was literally a group of crazy youngsters rebelling against their bourgeois contemporaries. One hundred years after its foundation, curatorial attempts are being made to compare the attitude and thinking of the 1920s to present day and that the design and art of the early Bauhaus years was anything but a singular episode. This makes it possible for creative groups to connect with a great history. You don’t have curtains? Then you are Bauhaus! For many, attitudes of the Bauhaus movement, such as creative self-expression, love outside of bourgeois marriage and back to nature, go hand-in-hand with our current living environment. At the same time, however, the museum tour reveals elements of Bauhaus that are largely outdated today, such as occultism or sexism that prevailed in the Bauhaus period.

The Bauhaus University is a lively place to think and plan and is located near the Goethe House at Ilmpark. Today, more than 4,000 students study design and technical courses here. In 1919, Walter Gropius decreed in his Bauhaus manifesto that: »Architects, sculptors, painters; we all have to return to crafts! Because there is no art by profession. There is no essential difference between the artist and the craftsman. The artist enhances the craftsman.«  Even though today’s studies are more theory and credit-point oriented, the Bauhaus spirit lives on through the students’ lifestyle and work as no other university can. The main building of the university is worth a visit. It was built between 1904-1911 and designed by Henry van de Velde as the »Großherzoglich-Sächsischen Hochschule für Bildende Künste«. It has been a UNESCO World Heritage Site since 1996 and additionally houses a very well equipped and modern library which shouldn’t be missed.

The Belgian designer Henry van den Velde lived in this Art Nouveau villa built in 1906-07 until 1917. The residential building is certainly not a Bauhaus building but it does reflect van de Velde’s architectural principle. The exterior of the house is a result of the interior structures and function of the individual rooms. High Poplars is not characterised by the decor and ornate facades but the idea of a reduced and functional design language. This restrained and elegant aesthetic equals Bauhaus thinking.

Bauhaus in Weimar: House at Horn

There is only 16 years difference between the construction of High Poplars and the House at Horn, but what an architectural quantum leap. The flat building, 12×12 metres, is the only Bauhaus in Weimar in which both the modern-living ideas of master and student were presented paradigmatically. The House at Horn was built for the Bauhaus exhibition of 1923. According to Walter Gropius’ modular principle, the building was to be a cost-effective model house for a small, working family. The construction was carried out by the Social Bauhütte, a trade union organisation developed by Bauhaus.

The House at Horn can be walked through entirely. All rooms are arranged around a central living room that is illuminated from above. After an eventful history, it was renovated in 1998-99 in its original style and the authentic furniture partially reconstructed. As you go through the house, you might ask yourself whether you would want to live in such a clear, cool building. Oddly enough, a »no« wouldn’t be an exception to the prominent Bauhaus artists who stayed mostly in tranquil and cosy apartments. Even if today’s Ikea style makes a lot of reference to Bauhaus design, the colour-filled room ensemble at the Goethe House radiates today’s ideas of living just as strongly as in 1923. Anyone who wants to understand why our modern-day apartments look the way they do can gain excellent insights in Weimar. A mixture of Biedermeier cosiness and Bauhaus elements characterises most of contemporary furnishings and, yes – right in your own living room!

If you would like to understand the historical, aesthetic and ideological background on which Bauhaus was founded in Weimar from 1919 onwards, then the exhibition in the newly reopened New Museum is for you. Many consider its concept even better than the neighbouring Bauhaus Museum. The tour shows a fascinating intellectual scene of early modernism in the city. In addition to the »Weimarer Malerschule« (Weimar school of painting), visitors can discover the work of the impressive cosmopolitan Harry Graf Kessler, the designer Henry van de Velde and the brilliant thinking and wild conceptions around the turn of the 18th century under the formative influence of Friedrich Nietzsche.

The philosopher Friedrich Nietzsche spent the last years of his life in madness at the former villa Silberblick. After his death, his sister Elisabeth had Henry van de Velde redesign the building in 1902. This was not yet done in the Bauhaus style, but the interior architecture and furnishings are among the most successful creations of the Belgian architect and designer who, as head of the Weimar School of Applied Arts, coined the Bauhaus nucleus.

In Weimar’s urban area, many residential buildings are known to have housed the heroes of the Bauhaus during the short-lived Weimar years. Most of them are privately owned and are no longer accessible. However, the memory of Bauhaus master Johannes Itten is connected with a public building even though only parts of it have survived due to war damage: the Temple estate in Ilm Park. The neo-Gothic building was once a garden salon for the Ducal family and Johannes Itten had his studio in the building. And because the rational Bauhaus movement was also an institution of Dionysian celebrations, it housed lively festivities organised by Bauhaus members. Among other things, this was meant to resolve conflicts between stubborn artists or with the public, as Ilse Gropius noted in her diary: »My husband has found that the best way to deal with these problems is to celebrate. It’s a kind of catharsis, a cleansing, like a thunderstorm — afterwards, the air is cleared. They laughed at each other, made jokes, and that was clearly the educational goal.« Oskar Schlemmer, the head of the theatre workshop proclaimed: »Tell me how you celebrate and I’ll tell you who you are.«

Bauhaus in Weimar: Monument to the March victims

Walter Gropius, the founder of Bauhaus, created this monument for the victims of the 1920 Kapp Putsch. According to Gropius, the abstract monument a: »Flash of lightning from the grave as a symbol of the living spirit« is the only one of his architectural ideas to have been implemented in Weimar. Even though the monument is a reconstruction with slight changes made in 1946 (the original was destroyed by the Nazis in 1936), it’s worth exploring the unfathomable places of remembrance in Weimar city. In 1946 the monument marked the first anniversary of the liberation of the Buchenwald concentration camp. 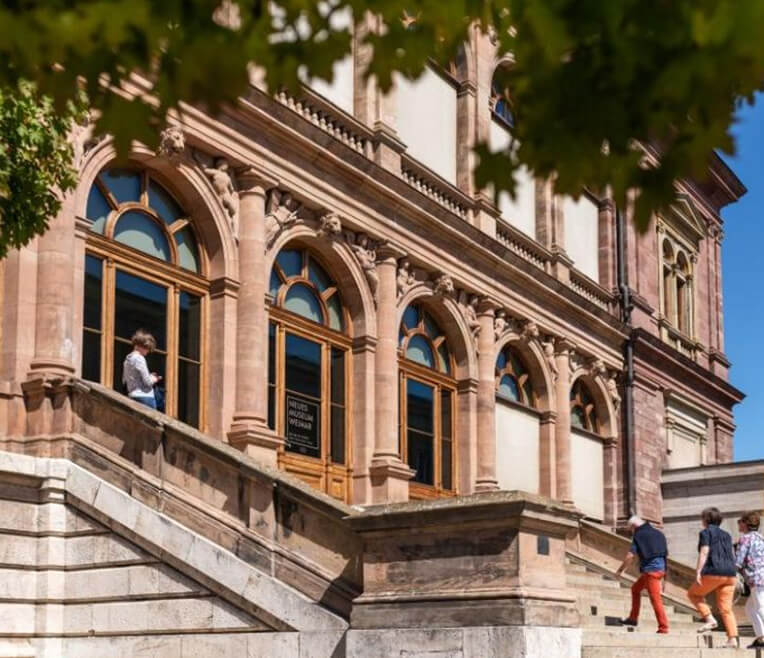 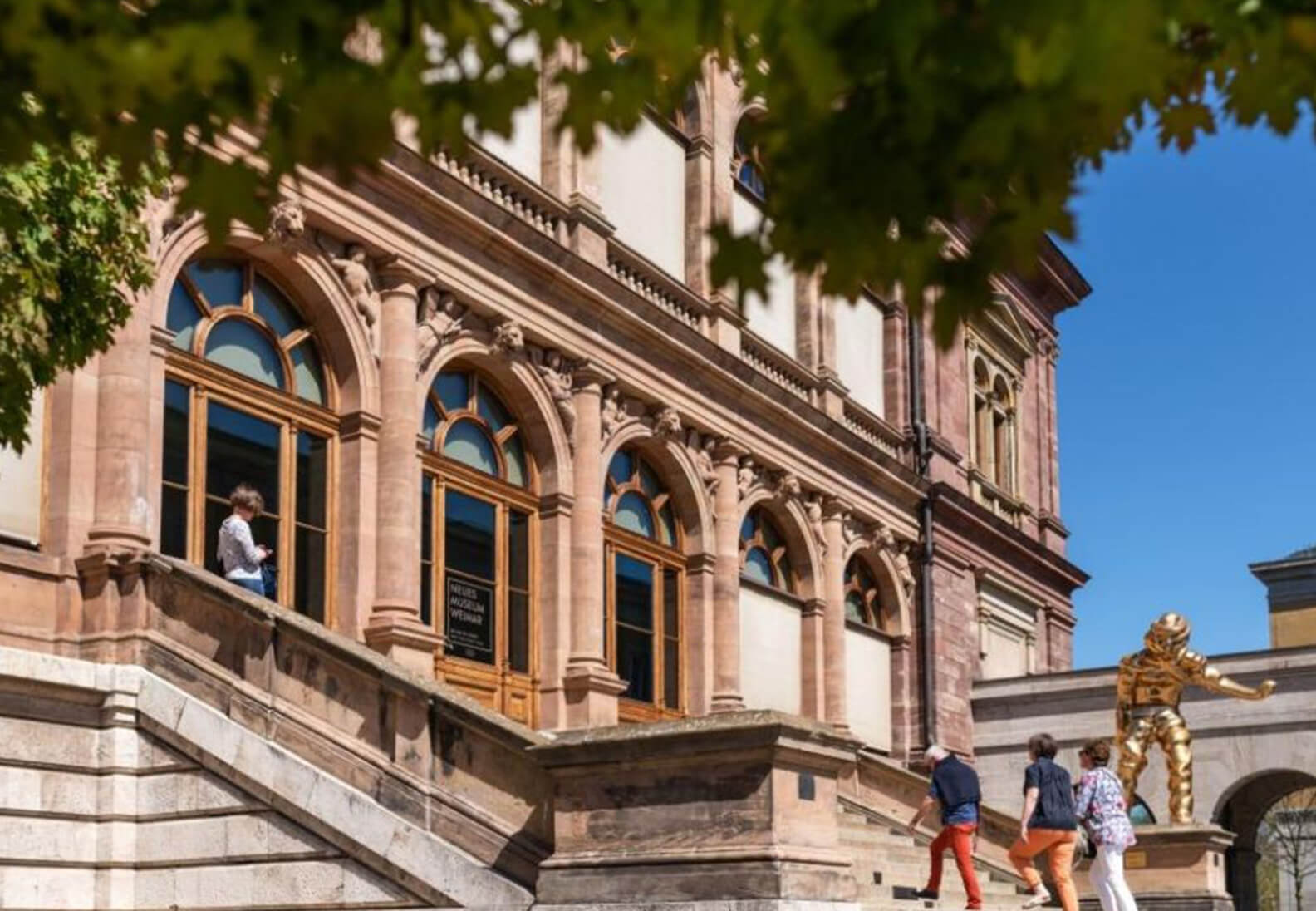 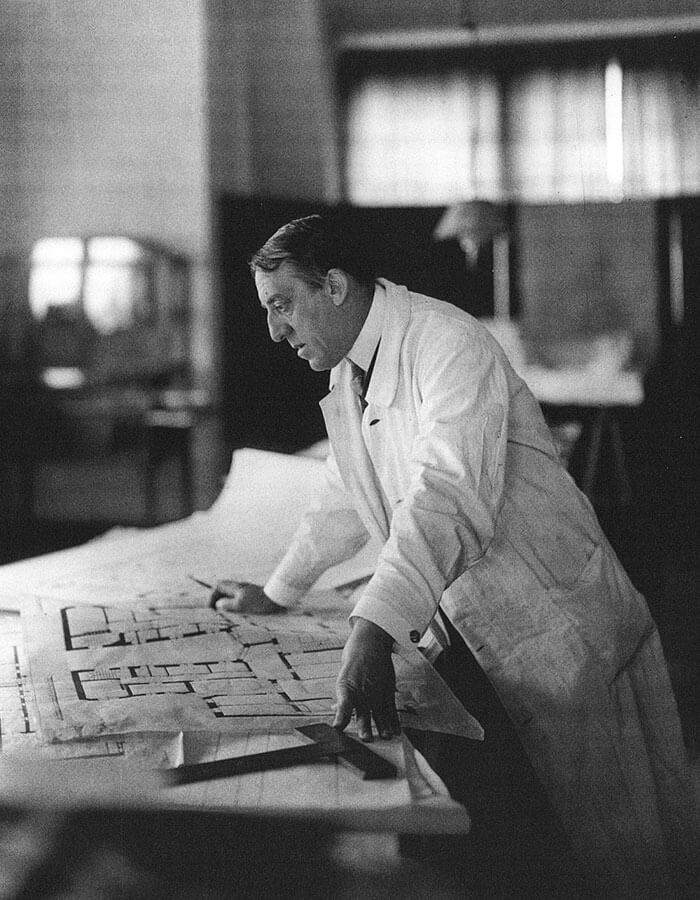 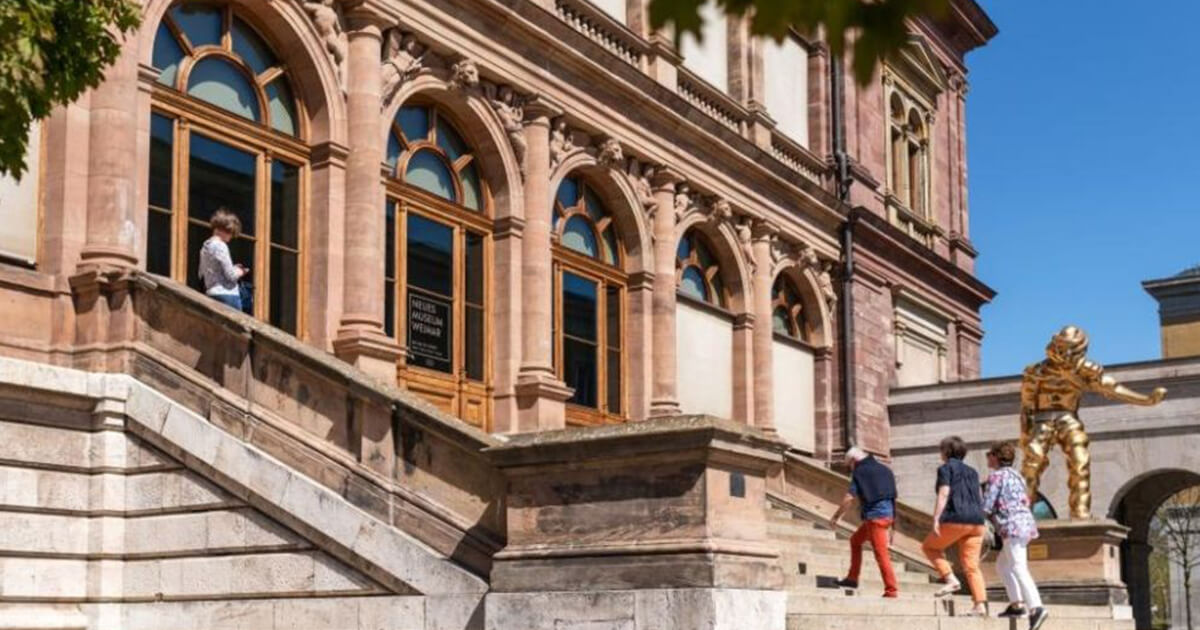