»The Notorious RBG« – this is how Ruth Bader Ginsburg is called nowadays lovingly by her admirers. The Supreme Court justice has turned into the cult figure of liberal America. Her imperturbable fight for women’s and minorities’ rights seems to have spurred the cultural imagination of the USA. In times of #MeToo, her liberal attitude seems more relevant than ever. But how come that a lawyer turns into a worldwide icon? A short biography.

»Women belong in all places where decisions are being made«

»The Notorious RBG« – this is how Ruth Bader Ginsburg is called nowadays lovingly by her admirers. The Supreme Court justice – with her 85 years, distinctive glasses and lace jabot – has turned into the cult figure of liberal America. Her imperturbable fight for women’s and minorities’ rights seems to have spurred the cultural imagination of the USA. In times of #MeToo, her liberal attitude seems more relevant than ever. Whether as superhero, biopic or action figure – her popularity shows unprecedented commercial potential. But how come that a lawyer turns into a worldwide icon? A short biography.

»The closest thing to a superhero I know«

Ruth Bader Ginsburg was born on March 15, 1933, in Brooklyn, as daughter of Russian-Jewish immigrants. She worked her way up from the working-class borough and enrolled at Harvard Law School as one of only nine women in a class of about 500 male students. As a result, she had to suffer from male prejudices against women at the workplace: Although she became first in her class, she did not find employment. Her legal career started in 1960 with cases against gender discrimination. Ginsburg was no feminist activist in the classical sense: She did not protest for women’s rights on the streets during the 1970s as many of fellow feminists did at the time. As a lawyer, she rather fought for gender equality in court. She conducted more than 300 cases for the American Civil Liberties Union (ACLU), where she represented women who had been discriminated due to their gender; women, for instance, who had lost their job because they got pregnant. Thereby, she acted very strategic and deliberately chose cases of discrimination against men. Between 1973 and 1976, she argued six gender discrimination cases before the Supreme Court, winning five. In real work-life, she also suffered from discrimination: As one of less than 20 law professors in the US, she earned less than her male colleagues. The dean’s explanation: She had a husband who could provide for her. When she got pregnant with her son James, she hid her condition.

President Jimmy Carter nominated her for a seat on the United States Court of Appeals for the District of Columbia Circuit. In 1993, Democratic President Bill Clinton appointed her to the Supreme Court: »Having experienced discrimination, she devoted the next 20 years to fighting it, making this country a better place for our wives, our mothers, our sisters and daughters«, he summarised her legal work. Ruth Bader Ginsburg was the second woman after Republican Sandra Day O’Connor and first Jewish woman to become Supreme Court Justice. She became known for her candour and pragmatism. Her sincerity has become legendary, since she called President Trump a faker. Ginsburg fought for the right of abortion and same-sex marriage. Equal rights for men and women as well as all minorities are her main concerns. About herself, Ginsburg once said that she was not the most liberal judge. But someone who sought compromise.

2013 was a turning point in her public reception: The majority of Supreme Court Justices had declared the laws that protect black voters obsolete. Ruth Bader Ginsburg explained her dissenting opinion with fiery words: »Throwing out preclearance when it has worked and is continuing to work to stop discriminatory changes is like throwing away your umbrella in a rainstorm because you are not getting wet.« Her outrage went viral on the Internet; her sincere dissent was celebrated on YouTube & Co. In New York, 24-year-old legal student Shana Knizhnik founded her blog (in reference to rapper Notorious BIG) the »Notorious RBG«. The blog caught the attention of the national media within its first week of publication.

»No truth without Ruth!«

Ruth Bader Ginsburg turned into a pop-cultural icon overnight. Amongst the generation of millennials, the 85-year old Supreme Court Justice was suddenly adored like a popstar. The slogan »No truth without Ruth« nowadays sells on mugs and tote bags. »I dissent« and »The Notorious RBG« have become popular fashion statements on T-shirts (which Ginsburg confessed of having herself in her wardrobe). Such souvenirs have made Ginsburg THE political icon of a liberal America. RBG is now a worldwide brand a whole generation of young liberals identifies with. The products function to build groups. Whoever wears an RBG T-shirt displays his or her liberal attitude. From a cultural studies point of view, such souvenirs can be compared to religious relics which enable its buyers to partake in the myth of RBG. In contemporary popular culture, Ginsburg is stylized as superhero with the help of mythical narratives: In the Hollywood blockbuster Deadpool 2 (2018), Deadpool thinks of admitting her in his X-force, i.e. a team of superheroes. In fact, Ginsburg can be purchased as an action figure replete with lace jabot and judge’s gavel (Link: https://www.the-outrage.com/products/rbg-action-figure). Talking of her lace jabot: Her fashion outfits are also cult. Ginsburg usually spruces up her judge’s gown with a jabot, choosing white lace or colourful patterns. When she announced a dissent, she chose her well-known »dissent jabot« made from black velvet and gemstones.

On December 21, Ginsburg underwent a left-lung lobectomy, which led to a huge wave of sympathy on social media. Today, she is 85 years and does not think of retiring as Supreme Court Judge. Not least because President Donald Trump would fill her vacancy with a conservative judge. It’s not often that Hollywood makes the life of a still living personality a movie – except they’re already a cultural icon during their lifetime: Thus, RBG now also conquers Hollywood with a biopic. The film biography On the Basis of Sex by Mimi Leder is a big recommendation and in cinemas now! 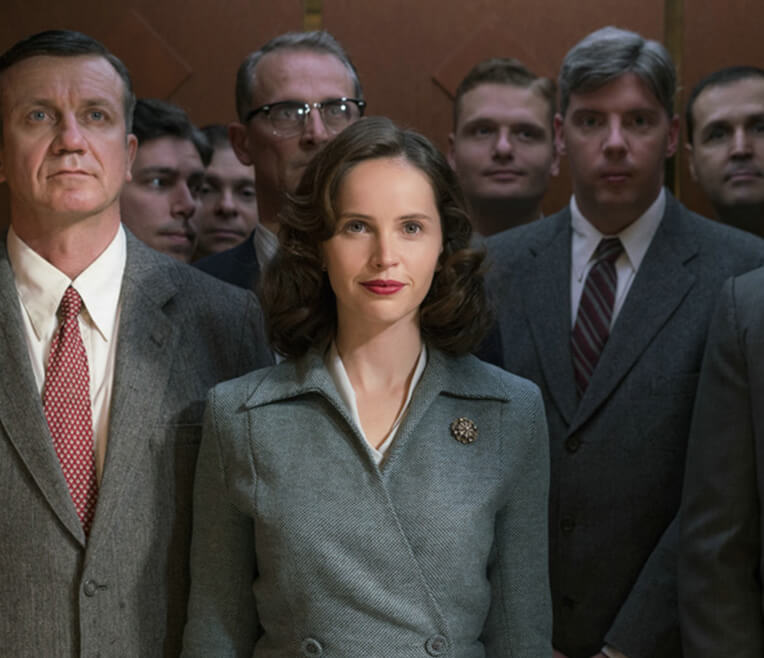 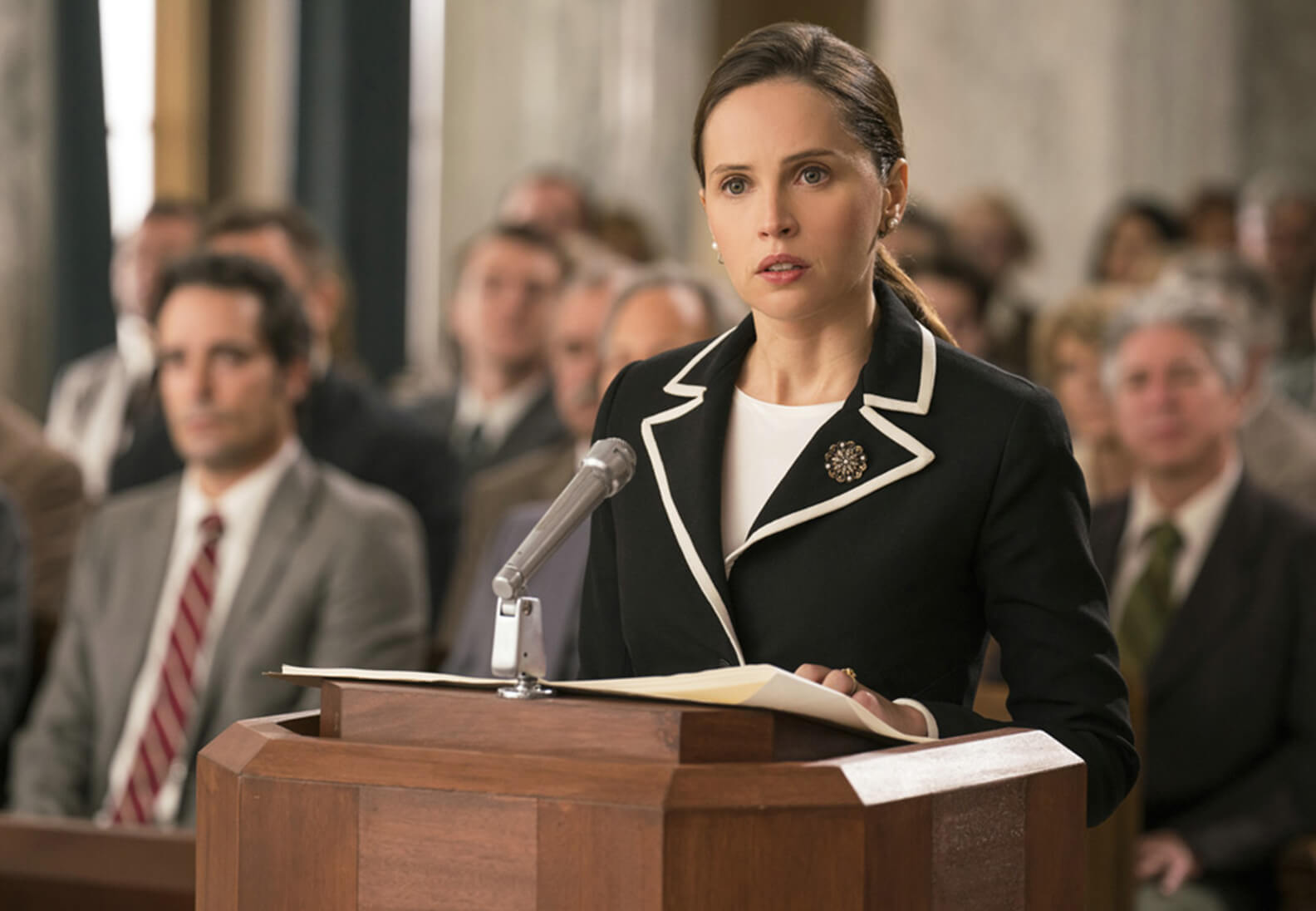 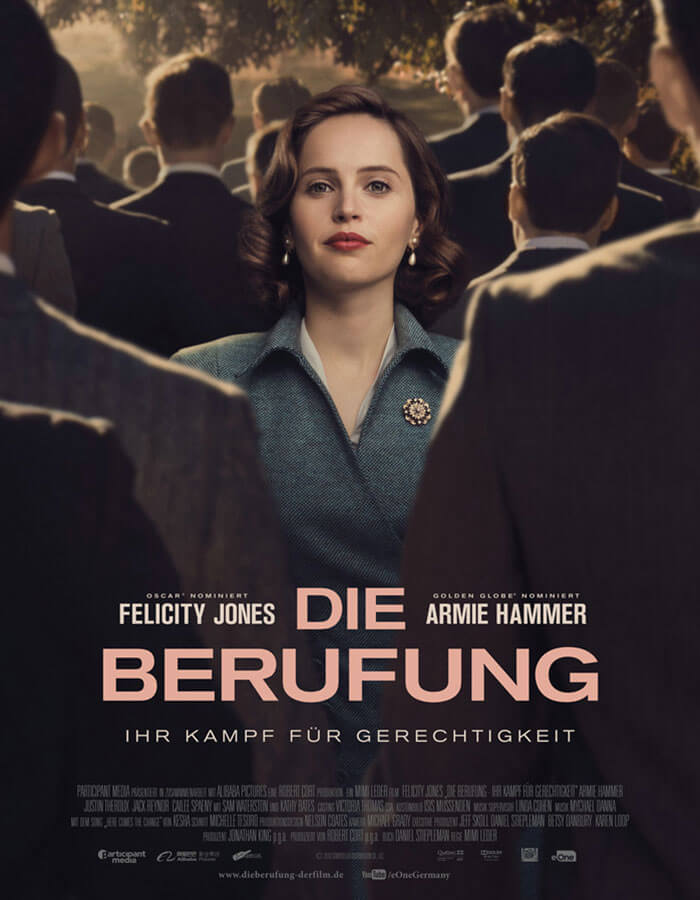 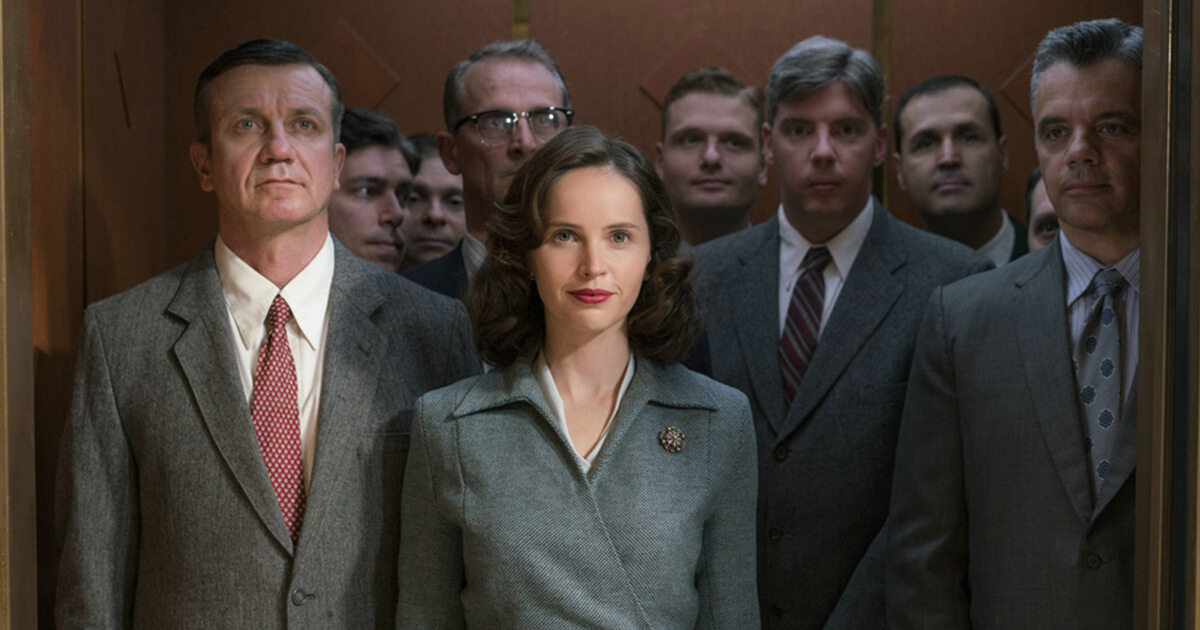